The week, in review

Feels like every post is a week in review post these days.  Last week, I made the tough decision to have the passenger side of my car repainted.  None of the guys that wrote up estimates (I shopped around) thought my 8 year old Prius was worth the cost, but the clear coat was peeling off the car like a sunburn and I wasn't interested in driving around in a car that looked like that (pride is an expensive sin).  And, I certainly am not ready to buy a new car.  Later.  Closer to retirement.  But, not now.  So, I took it to the body shop I chose, partly because they're a partner of the insurance company I work for and I know how hard it is to earn that partnership.  They had it all week, and I picked it up Friday, so happy that it was done and that I could afford to make that choice.  But, when I got home, I found a big chunk knocked out of the part of the car they didn't paint, and the corresponding chunk knocked out of the hatchback they did paint.  Apparently the hatchback reinstall didn't go that well.  There are other issues as well, so today, we go back to the shop to ask what happens now.  I hate that part of adulting...the part where I have to use my voice to get what I want.

Even though I hardly go anywhere, it was hard to know I was here without a car and couldn't go somewhere if I wanted to.

I'm about 20% done quilting the Falling Leaves quilt.  I picked my corner, sat down and did it in a long stretch of quilting that included some picking out...oops!  I thought I was more warmed up than I actually was when I put the quilt in the machine.  It's going to be a beautiful quilt.  I've noticed that when I quilt the wind pattern, I tend to drift right, so no matter how much progress I want to make down the left side, I'll get some stitching in, but before I know it, I've moved back over to the right edge.

This quilting motif is so forgiving.  I saw a hundred mistakes when I was quilting, but when I step back, I only see a couple of small spots I didn't work my way into and fill with quilting.  I've marked them with pins so I can find them again. 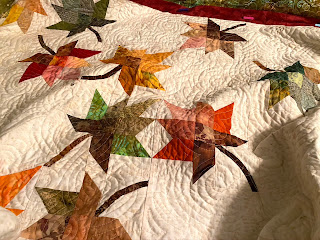 I've spent a lot of time knitting.  I don't know what to say.  I look at it and can hardly believe I did that.  Twice, I've decided to take it apart and start over and both times, I've spread it out and looked it over and changed my mind.  Bunched up on my needles, I see what looks like so many errors.  But, when it's spread out, like it's going to be when it's done, I have a hard time finding them, and talk myself out of taking it apart.  There are two small errors that are always going to be visible and I'd have to take out several inches of knitting to get to them.  They're both low, on the back side, and I'm okay with having two small errors there.  Hopefully, if they're looking that low on my backside, it's not the sweater they're looking at.  😆 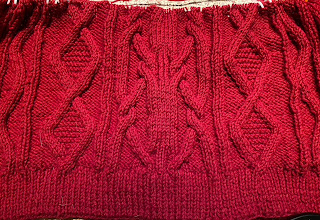 I am not officially picking up a new project because I need a new project like I need a new hold drilled in my head.  But, I did some prep work for an appliqué flower block from the Ruby McKim Flower Garden quilt.  In the quilt's numbering sequence, the first block is supposed to be the lilac...and, no.  Each flower of the block is made individually and just, NO.  Not, going to be my first block.  I picked the daisy.  I'm using a tan background that's supposed to look like aged parchment.  My pieces are cut and traced, but I'm not starting a new project.  All together now.  I'm not starting a new project. 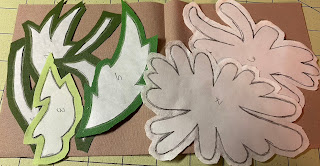 Honestly, yesterday morning was a hard morning.  I was very anxious and I needed a distraction, and that's what prepping these pieces gave me.  Something new to think about.  I also baked bread and scones and made home made sweet and sour sauce as prep for tonight's dinner.  I knitted a while and I also took a nap, which is very unusual for me.  Having time off for the holidays has surely got me thinking about retirement.
--------------
Everybody knows what week it is.  Taking away the orange's bullhorn certainly has made things quieter and it would appear that, plus the arrest of his most violent followers toned down the violence a good bit.  I think that's a good thing.  It's not so easy to be the chest thumping, screaming traitor when it results in jail time.  As Thomas Paine says, "summer soldiers and sunshine patriots".  I don't believe they're done whining about 'losing so much, we're all sick and tired of watching them lose'.  (Sorry, couldn't help turning that quote around.)  Anyway, in a couple days, decency, honor, respect, constitutionality and TRUTH will be back in control.  We just need to get through the next couple days.
Everybody have a good week!  I'll be glued to the tee-vee on Wednesday, watching good things happen.  Hope to virtually see you there.
Lane