Sometimes, it's not what you think it is

I have my Grandmother's Singer 15-91.  I had done everything I could to this machine, but it ran "sluggish".  It was slow to start and it never ran very fast and there wasn't much speed control... peddle to the metal was annoyingly slow.  The only thing I hadn't done was take out the spiral gear that links the motor to the machine and clean out the old lubricant and try again.  My assumption was that old lubricant was thick when it was cool and needed to heat up before the machine would go. 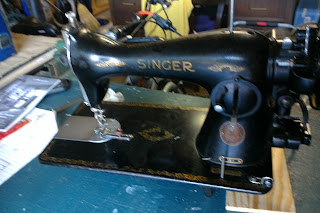 Rob and I took it out to the work shop this weekend (i.e. garage).  And, we set about trying to remove the gear.  And, at some point, I realized that wasn't it.  It was something else.  And, that gear is a big old bear to get out of there, don't let any cute little internet video fool you.  So, I lubricated and oiled the machine while I was at it and put it back together.  I even got Rob to help me take out the one screw I'd never been able to get out and we replaced the spring in the bobbin winder, so now, it isn't always against the wheel.  That also helped with machine speed. 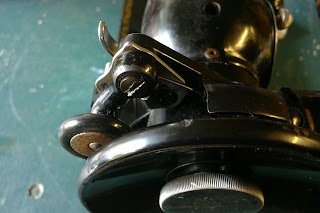 I decided to check the foot peddle to see if the problem was there.  And, of course, it was.  It's a plunger control and the screw that holds the plunger in had backed off so when the peddle was all the way down, the plunger was barely getting pulled out of the controller.  Tightened that up and now, she's purring along like new. 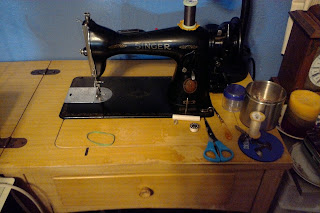 I even made Rob a pair of lounging pants with this machine, just as a way to get warmed up to it.  This is a great machine with a ton of power and now, great speed control.

I've also been working on the Singer 401 that belonged to a friend's Mom and am making a shirt for me on it.  Talk about perfect speed control.  I can make that machine go almost as slowly as the Bernina when I need it to.  Loving it.  So glad I stuck with it and got both these machines repaired.  I truly almost gave up on them both.  And, while I was having such good mojo, I also worked on the Elna Supermatic.  Got everything fixed on that machine, too, except the tension.  Going to have to keep at that.  But, that's the fun of collecting, right?

Oh, just say it and make me feel better.

Have a great Tuesday!

This weekend was a busy one.  Again.  But, the weather was cool and I got to spend some time in the garden, playing in the dirt.  You know I love that!

And, I made the August feathered star block.  It's going to be different from all the others.  But, there's nothing wrong with things being different, right?  I mean, I'm different than I was when the year began.  My family is different.  What we do is different.  So, a different block seems right in line. 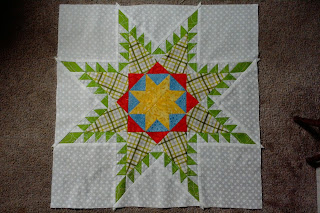 Now that I see a picture of it, I wish I'd been more careful with the plaid.  I could have ended up with a real nice dark line circle that went around the center of the block.  But, oh, well.  I don not see me taking it apart and fussy cutting those two kites and putting it back together.  At least I hope I don't do that.  But, you never know.  Rob just came in and we've decided that you can only see it in the pic, not when looking at the block, so it most likely will not get fixed.

Here they are, all together.  What variety and diversity! 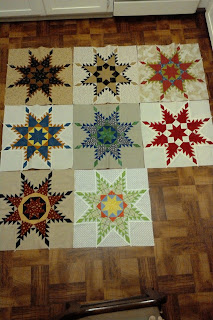 This weekend, the beagle hurt herself.  She was running around the house and did something to her foot.  She yelped like Rob was hacking off a leg with a machete.  And, when I went in the room to see what was up, she ran to me and ducked her head against my side.

I can never deny that I am the comforter of the sick.  Everybody in this house knows it.

Y'all have a great Wednesday.  I've been busy at work, pulling mountains of data... and I am tired of that.  Now it's done and I have a couple other projects that have gotten behind.  But, at work, it is always better to be busy than to be sitting there, watching the clock.

I've skipped around hand quilting the Dresden Plate quilt.  I couldn't work consistently across because I've been marking with blue washout pen and dampening the quilt to remove the ink as I went.  So, next thing I would mark had to be away from that dampness.

But, I have finally finished one complete corner, including the blocks, sashing and border. 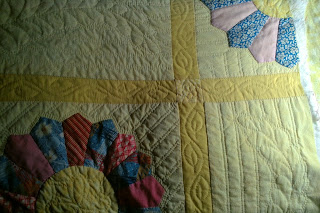 I hope you can see in that pic how I went around the corner.  It's not as good a pic as I thought. 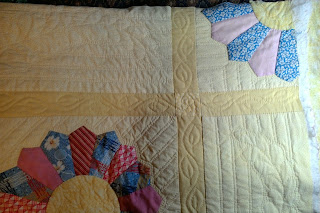 Heres a slightly better one.  I was quilting those straight lines behind the feathers in the border, and needed a way to round the corner.  It took some effort to figure out how to mark and quilt it and get the lines to line up.  But, it works.  The corners each have a quarter plate in them.
So, it's the anniversary of September 11.  A day to remember and I do remember.  I remember what I was doing and how frightened I was and how I worried about how this would change things.  And, it has changed things.
Please remember because those who do not study history are doomed to repeat it.  And, we can't afford to lose any more of our freedoms in deference to terrorists who would harm and frighten and threaten us.
Lane
﻿
Posted by Lane at 7:50 AM 8 comments:

I was fighting the Dresden plate quilt.  I did my absolute best stitching in one of the straight lines in a border and it was all curvy, like a worm quilted it.  I sat back for a few minute and relaxed and tried to figure out what I could do.

The secret to my hoops has always been having some backing fabric tucked into the hoop all the way around.  That kept that backing stretched taught and I could then work with the quilt top and the batting.

But, this quilt didn't have enough backing fabric on this side.  It had enough on the first two sides I quilted, but not this side. 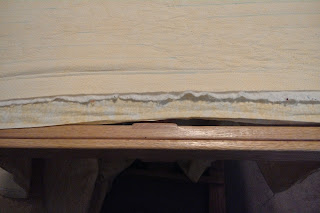 I tried it in two different hoops. 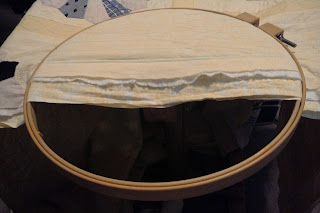 Same problem in both.

So, I sat back and looked at it.  And, I thought about it.  And, I answered some email and watched a little TV.

And, then I went out to my stash busters system and pulled out some of my widest strips of fabric.  And, I sewed them along the side.  It ain't pretty.  Doesn't need to be prize winning stitching.  It will all be cut off and only y'all will know it was there. 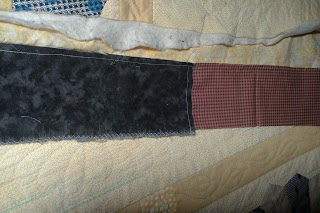 But, look how it made the quilt fit into the frame... 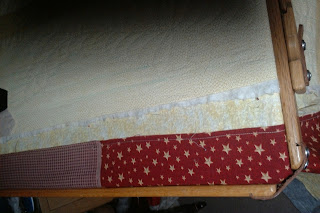 All tucked under the outer frame.  And, now I can start quilting again.  Whoo-hoo!

Everybody have a great Saturday.  It's the start of a three day weekend.  Enjoy every minute of it and try to get some sewing in.  You'll be glad you did!