I've been practicing this look. That moment of triumph at the end of the long, uphill battle of teaching a child. 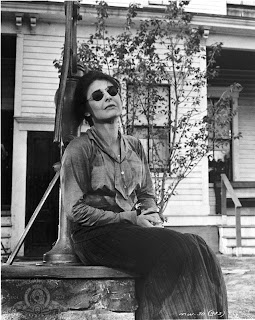 It's the look that Anne Bancroft interpreted for us when Patty Duke as Helen Keller, learned what "w-a-t-e-r" is. 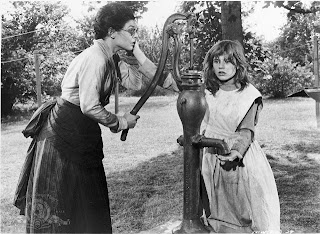 Unfortunately, today, teaching my child feels much more like this. 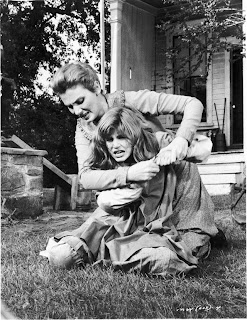 One day, I'm going to see that confused look pass over Sydney's face. And, then there will be that moment of comprehension. And, then she'll actually get it. And, the heavens will open and the sun will shine upon her and angels will sing as a flock of white doves passes overhead, cooing softly. And, then I'll sit down and pull that Anne Bancroft, exhausted, victorious look out of my pocket and I will put it on...and the world will be a happier place.

Last night was not one of our best nights. We got a call from the Spanish teacher. You guys all know how hard I've worked with her on Spanish. We started good. Rob and I talked and got our frustrations off our chests and then we approached the demon. I was calm. Rob was calm. And, then she had to smart off. And, the disappointments and frustrations of 4 months of pushing and prodding and dragging and pulling her to understand Spanish all came rushing out.

Like not going to my unhappy place because I shouted at a very frustrating kid. That's a victory for me. Like keeping her with us and continuing to try new things, even knowing that 4 families tried before us and she pulled these same shenanigans and none of them could handle it. That's a freakin' huge victory for Me and Rob, both.

So, I'll keep waiting for my Annie Sullivan moment and I promise, when it comes, I'm going to hire me a photographer to capture the exhausted victory in my face, just like the photographer did for Anne Bancroft. Me. Looking heavenward, toward my reward.

On a happier and more fruitful note, I really appreciate all the comments from yesterday's post. I know I called it boring, but that quilt really isn't. It's just taking forever and I'm ready to work on the next one. I'm not really showing any more pics because I am planning to enter that one in an online show and you'll get the chance to see it and even vote for it (???) then. But, I will share this link to a post where I talked about it before I decided to enter it.

Well, that's it for today. Next, check whether the Spanish teacher wrote back. After that, work, work, work.

Seriously, she suggested dropping it because she has a C? That just seems like giving up on something that isn't that bad. Not to say that a C is wonderful, but one of the marks I'm actually most proud of in university is a C. I worked my tail off for that particular C in first year and it means more to me than the A's in my 4th year classes.

Good for you for recognizing the wins within the parenting battle. It sounds like you did well to me.

On the other hand, some language classes begin by reviewing everything that was taught in the previous year. If that is the case, and she is getting a C, maybe she should repeat last year's class. Languages really are hard for certain kids. Even kids who are bright and work hard sometimes have problems with them.

A way we found to preserve our relationship with one of our kids was to get him a tutor twice a week. That way the tutor helped with the homework, and we got to be the parents, not the teacher.

My third child is starting Spanish this year, and today he has his first Spanish quiz. I've got my fingers crossed, but he is dyslexic, and I know it isn't going to be easy for him. I'm hoping for C's!

Awww.....phooey. I guess there has to be some rough spots in child rearing, but I was hoping the glimpses of maturity we saw this summer were permanent. Oh well, shake it off and try, try again. I AM surprised that the teacher wanted her to drop the class.....anything else going on there? Probably not, she just went for the big guns first. I'm thinking Sydney's attitude in class, interaction.....etc. Maybe their personalities just clash. It's so hard, I know. Love ya, Becky

Parenting is the hardest thing you will ever do, but honestly, it is also has the biggest reward. Honest--cross my heart!!!

Oh, dear... good for you! My daughter is eleven and I keep hoping that she'll get it together and I won't have to worry about her school stuff one of these days. But I probably shouldn't get my hopes up too high...