Busy, with nothing to show

I am returned from the north, and just in time!  I was coming home as the weather was getting bad and flights were being delayed and cancelled.  I was lucky.  I was only delayed by a few minutes, and the pilot made them up in the air, so I got home about 5 minutes after I expected.  This is a really bad picture of Dallas, and I only put it here because I didn't want you to see the main picture until I explain it.  Remember that Dallas is only half.  I couldn't get a pic that had both Dallas and Fort Worth in it.  Even at 30k feet, it's a really big place. 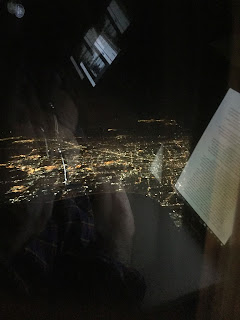 It was the usual business trip to a conference.  Lots of speakers, food, booze.  I split a presentation to a breakout group.  My co-worker presented how to follow a process and I presented how to make changes to the documents we work with.  It was not my smoothest presentation, but everyone I asked said it was fine.  The hotel was nice, the food was good, I slept well and I got to see all the people I work with from around the country and met several new people that have joined the group since the last meeting.

I guess I never thought my life would work out this way.  Business trips, conferences, presenting.  Who'da thunk it for a small town boy without a degree?  But, it's the life I've made.  And, my peers speak highly of me.  Guess I can't ask more than that out of a career.

Of course, meetings have to have icebreakers.  They truly are my least favorite part.  But, over the years I've embraced them and found that the more I participate, the more I get out of meetings.  We played rock/paper/scissors until only one person was left of the 65 of us.  There was a trophy made from a pair of scissors.  Think about the last time you played.  And, there were so many sets of rules in the room.  It made for a lot of laughs and a lot of discussion about something as basic as that.

Another one, we played a version of the gossip or telephone game where a word starts at one end of a line of people and it gets whispered down the line and you see what the word turns into at the end.  Except we did it with pictures.  Each person chose a word and drew a picture of it.  Passed it to the right and the next person took a guess, wrote the guess on one page and drew a picture of their guess on the next page.  The next person guesses and draws a picture of their guess until the pad goes around the table and then you compare the first page with the word to the last guess.  That one was fun, too.

The tables were randomly assigned, so it gave a good mix of people to visit with and to meet.  People you might not know so well.  That made the headbandz game much more fun.  In headbandz, you put a card on your forehead and play a 20 questions variation to try to guess what it's a picture of.  I drew the unicorn card right out of the box and put it on my forehead, and everyone at the table started to laugh.  That seemed ominous. 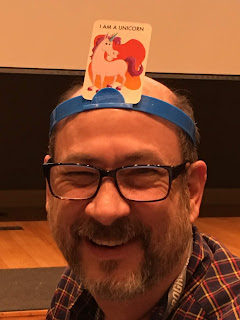 It's only fun if you laugh as a group, which is the purpose of an icebreaker.

Unicorns and glitter, y'all!

This time, instead of taking a bulky book, I downloaded a book to the Surface and used it as a tablet.  It worked really well, so that's probably what I'm going to be doing from now on.  I can listen to music on my phone and read a book and relax during my flights.  It makes all the difference.  My co-traveler and I had a long layover, so we spent it having a steak dinner in Atlanta, then got on a plane for 2.5 hours.  MISTAKE and lesson learned.  I definitely enjoy traveling more when I eat light.

Yesterday was about catching up on all the stuff I didn't get done while I was gone.  It was a very busy day and I was very tired doing it.  Today should be a little bit easier (knock wood).  But, first, I need to unpack and get my dirty clothes in the laundry.  Everybody have a great weekend!  It's the last weekend before Thanksgiving, so time to be thinking about pies, green beans, yams, and salmonella.  Just kidding...sort of.  But I bet the sales of meat thermometers is up this year.

Happy Thanksgiving to you and yours! (got my meat thermometer ready)
Betsy

Welcome back. 30 years ago, I would have read about embracing icebreakers and snorted in disbelief. It still would be a great stretch, but you have shared your experiences about trying your darnedest to participate and the benefits of your efforts. It really could be worth it.

You have created such an interesting and rewarding life - on so many levels.

Love your sense of humore. I needed that.