Last Monday, Rob came home sick in the middle of the day.  By Tuesday afternoon, I was feeling bad.  On Wednesday, we were both home sick.  On Thursday, he went back to work and on Friday, I worked from home.  We still weren't up to par over the weekend.  There's something going around Austin and we got it, but I hope we didn't pass it along.  At some point, I remember telling Sydney not to sit on the living room furniture and to wash her hands often.  She, of course, did not get it.  She never gets anything.

I don't do sitting still so I finished and added all the little bits and pieces that were partially pieced to the hexie quilt.  The pattern doesn't show up very well, but I've moved into the blue border now and have basted a ton of hexies for it and have started to build the flowers.  I needed another blue fabric and that was one of the things we picked up on Saturday running errands.  It had to be just the right blue, so we had to stop a couple times to find it.  And, I bought fabric each time.  So, I'm glad it showed up quickly. 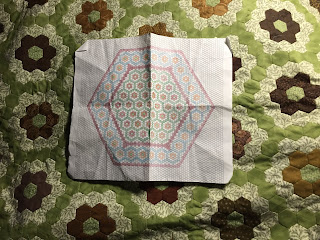 I didn't feel like doing much quilting, but I did manage to tie all the knots around the hexie flower quilt.  There were about a 70 pair of thread ends that needed knotting and tucking into the batting.  Thank goodness I had already stopped to do that once. 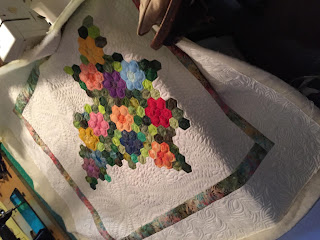 When we are sick, we like to lay around in lounging pants.  We found we don't have enough pair and I decided to make us some more.  Rob wanted camo and I used a couple of juvenile pieces that we had bought to make shirts that never got made because we fell out of love with the idea of them as shirts when we got them home. 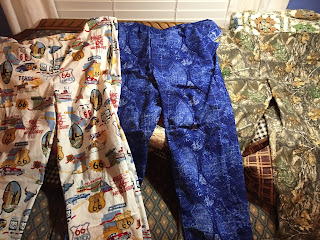 I thought I'd make them in tandem, all three in one day.  And, I dang near did it, but it took ALL day.  Partly because I added a fly to the pattern and added a finished serged edge to all the pattern's raw seam allowances and added a button in the fly and button holes in the waistband so I could replace the elastic waistbands with belt ties and made the pockets extra deep and rewrote the pattern instructions to accommodate all those changes.  That's all work I won't have to do next time I use this pattern.  And, I sewed the wrong leg seams together on one pair and got it serged before I realized what I'd done and had to rip all that out and do it again.  And, there were plenty of other errors that had to be corrected along the way.  My seam ripper got lots of use.  All that's left is the waistband seams and the leg hems and sewing the belt ties.  All that is ironed and pinned and just needs sewn.  I will not try to make three pair in a single day again.  Poor Rob had to take care of lunch and dinner because I was a man on a mission that couldn't stop.  And, then my body made me sit down.

Whenever I could, I would walk around the yard.  Everything thinks it's spring.  Now, normally the plants know best and when they bloom early, it means we've had the last hard freeze.  But, there's always this fear in the pit of my stomach that we will have 3 days in the teens like we did last year and all the new growth will get nipped.  But, I enjoyed the flowers that were there and the little buds and sprouts and leaves that are starting. 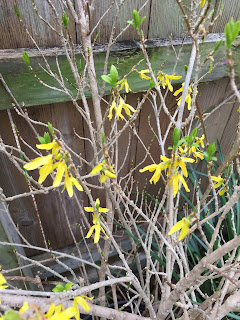 The forsythia blooms first.  Then, the mock orange.  When those are done, the garden is in full force.  I am looking forward to that, but honestly, I haven't had a chance to cut the roses back yet, so I feel like I am behind.

Everybody have a great week!  I'll be making up for those two days I took off last week.  I was able to take it easy on Friday, but I won't be able to do that today.  It's back to the wheel and the grindstone.  May your needles always be threaded and your sewing machine always be oiled.

Umm, just how big are the hexie patches in your flower quilt? It is another minerature quilt, isn't it (seen next to a sewing maching for reference)? Lovely, tiny work.

They aren’t really that small. All the hexies are one inch on each side. I bought a hole punch and punch them out of cardstock weight junk mail. Frugal tip! Lane

Oh I laughed when I read about your pants.....from completely rewriting the pattern to sewing them wrong. You are always up for a challenge....even on a sick day. Awesome! Thanks for sharing. Mary

So sorry you were both sick. You did a lot to have been sick...
Love the hexie flowers, they are so pretty. Take care and do not give
it to each other again. Your forsythia always bloom before mine. lum

Glad you're both on the upswing! You are certainly an OVERACHIEVER even when you're sick! I got hit with the ick like a ton of bricks on Friday afternoon and have been struggling to do anything all weekend. I can't even sing because I lost my voice, and not being able to sing makes me grouchy! All I accomplished was to test fabric for colorfastness and print out some templates.