I am happy to say that I got both my quilt guild raffle quilt blocks done.  They came out very nice, but both have their little imperfections.  The other day at work, there was a young co-worker looking very closely at a piece of woodwork he had created.  Later, I heard him talking to another co-worker about the mistakes.  I took the chance to share the quilter's maxim that if you hang it on the front porch and look at it as you ride by on a galloping horse and you can see it, it's a mistake.  Both my co-workers enjoyed that a LOT! 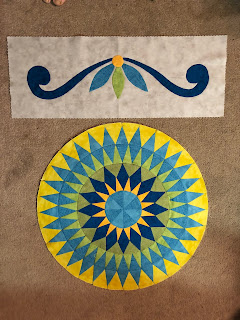 We should start getting other blocks back tonight.  I've heard from a couple people that have finished and am sure there are others.  The background for the quilt is three shades of gray fabric.  The one used in the applique is the medium.

Other than that, the only sewing I've done in the last two weeks was to piece a block for a pattern I was reviewing.  I was absolutely dead sure the measurements for the center were wrong,  So, I pulled out some fabric and gave it a try...and I was incredibly wrong.  I don't have to make a block often in reviewing patterns, but this is not the first time.

I've spent a little time in the garden.  We were at the hardware store Saturday and watching all these people buy stuff for their yards.  We were breaking a sweat just walking to the car and I looked at Rob and asked "Isn't it a little bit late for that?" and we laughed.  We both do all our hard work in the fall winter and spring.  All I'll do from now until September is pull out the dead stuff to keep the garden clean and keep the air flowing through it.

These two iris came off the same stalk of the same plant.  This is a shade loving iris, but I think I might have put it in a little bit too much shade, so it will be moving to a sunnier spot soon and hopefully, it will do more than this next summer. 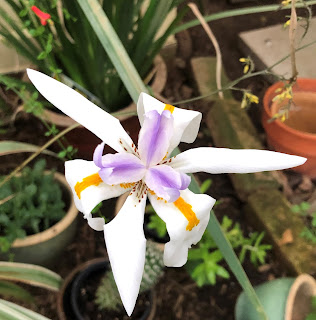 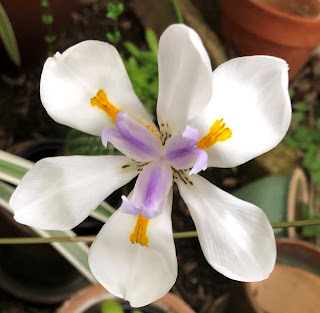 This is a "dead nettle" that I bought because it was a shade loving ground cover and I like something that is kind of vine-like growing out of this tilted over pot.  It blooms a fuschia colored flower every so often. 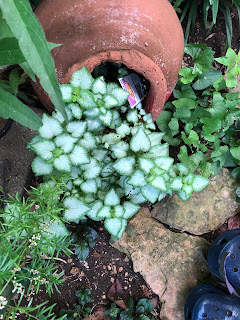 For my shady spots this year, I chose a bi-color coleus and red impatiens.  You can't see the coleus.  I just cut it all back... 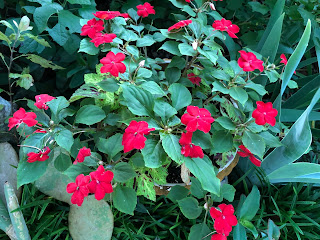 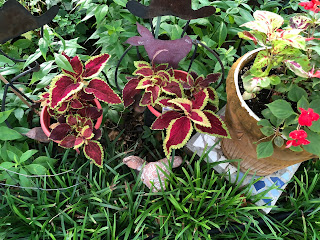 and am starting a ton of baby coleus.  I recently did the same with a Dusty Miller that survived from last year and it's rooted and ready to transplant. 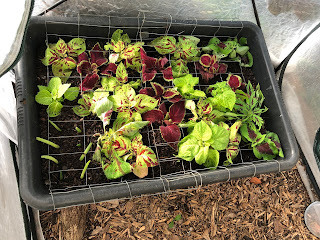 These are two pots that have done extremely well in the greenhouse and I wanted to show them off outside the back door. 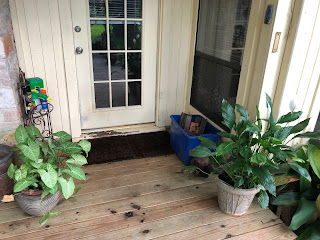 Yesterday, we started packing.  No, we aren't moving.  We are packing and will move most of what we own into a POD in the driveway while we have our foundation repaired.  We had a structural engineer in a couple months ago and got his assessment of the problem so that when we started talking to repair companies, we'd know enough not to get ripped off.  And, we studied foundation repair until we knew enough to be able to talk to repairmen and ask good questions.  Then, we started inviting companies in for bids.  We got a variety of repair options and a range of prices.  And, we went with the most expensive because it matched the engineer's assessment the closest.  When we had that engineer in, it was to keep from being overcharged.  We ended up using it to make sure the repair we get is the repair we need.  But, it means moving out of the living room, the dining room, the kitchen, and packing all the glassware I have stored in the laundry room.  If you've followed for long, then you know I have a slight obsession with glassware and dishes.  That's really fun...until it all has to be packed up or washed.  And, we have to take the boards off that deck we had built a couple years ago.  We're trying to hire someone to do that.

Anyway, wish us luck.  After the foundation, we need more repairs.  It's going to be a periodic construction zone around here as we have sheetrock repaired and the house painted inside and out and we'd really like to get new floors.  And, we have to have an air conditioner.  And, we need plumbing repairs...……..

Rob reminded me, a house is never really paid for.

I think the best part of this has been how well Rob and I are handling it.  We both look at one another occasionally and say "I think I'm going to throw up."  Not literally, but between us, it's a message of; I want you to know I'm really nervous about this and I'm saying it in a way we can both laugh about.  We've had a couple moments where we lost patience with one another, but nothing has escalated into an argument.  And, we haven't kept any of this from Sydney.  She's been listening and reading the bids and asking questions.  And, I believe that what we are conveying to her is "life happens.  Deal with it in a happy way and move on."  At least I hope that's what she's taking from it.  That and don't be afraid of the hard stuff.

Oh, and knitting makes a great distraction.  I've been knitting my way through the anxious bits.  I have the front and the back of my sweater done and am about 40% of the way up one arm.

Everybody have a great Monday.  I'm off to pick and box and fill it with useless stuff.

Oh my word! Sounds like a big project, moving everything out but thank goodness for those handy PODS. How long do you expect the process to take? Thanks for sharing. Good luck. Mary

Busy, busy, busy and a new job mixed in. WOW!!! Very smart to get an Engineer in the beginning. Thought maybe you were moving. And you have found time for the yard. It looks great, we are finally dry here and having to water. Our daylilies are in full bloom, as are the gardenias and daisies. Never had so much blooming at one time. Take care and do not work too hard. lum

Yikes!!! What a challenging time! Sounds like you're doing all the right things. Especially, educating yourselves and taking through the stressful bits!! Good luck with the repairs.

Ugh.. I hope the foundation repairs go smoothly for you. What a hassle. And of course Rob is right, but it still doesn't make writing checks for HV/AC repairs, new roofs or foundations as much fun as writing checks for new backsplash tile or home improvements! Your blocks for the guild raffle quilt are gorgeous -- it looks like that quilt will be a stunner!