I keep showing off the projects that I'm most proudly working on, but I'm never working on just one thing.  There are always background projects.

As I've been working on pointy arcs and borders, I've also been running a leader/ender through.  This was the first one.  The squares were a gift from a  friend who ordered sample squares from two full lines of solid fabrics.  She gave them to me and I used all but 6 of the 1.5" squares.  While I've been working on points, I've made about half the 9-patches and then paired them with the white scrappy squares, then sewed those into quartets and then eights and then rows.  I tried sewing a row as a l/e, but at that point, it's not a leader/ender anymore.  It's something else, so I put it with my other UFOs and moved on to something else. 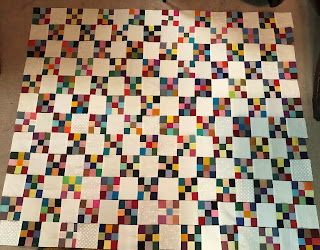 I won't run out things to do on my next leader/ender before all the points are made.  Diane Gaudynski made a log cabin quilt with half inch logs out of hand dyes several years ago.  I love it.  But, I'm too cheap to buy that many hand dyed fabrics, so I decided to make mine with what I have; two bins of 1" wide strings that I've been saving for years and years.  I didn't know what I'd use them for, then this idea came to me.  I made a few blocks a couple years ago and they were fine.  But, it wasn't exciting me, so I set it aside and kept collecting.  It's perfect for a leader/ender that I'm working in conjunction with another paper piecing project.  I go back and forth between the two, using all the same tools. 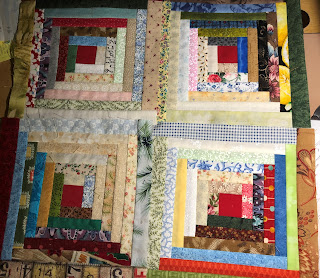 I have enough strings to make a large quilt.  We'll see if I have the stamina.

Replacing my boxers continues.  I've tried to keep quiet because showing my underwear to the world shouldn't be something I want to do, but I do because it's making me happy.  I've been mostly pulling yardage from my stash.  If I think it would be fun to wear, I'm using it.  I think these are one of the most fun pair I've made.  That took some careful cutting. 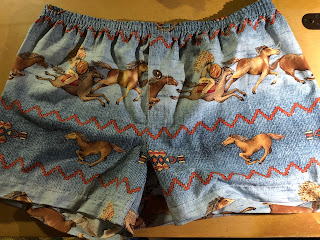 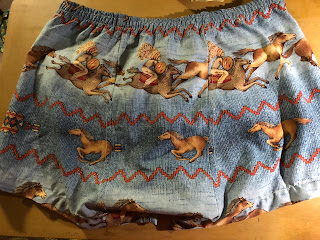 I'm also taking the studio drapes apart to remake them.  I'm starting to think I won't need to take them completely apart.  I think the problem all along was the side seams.  There were two rows and they were tiny, tight stitches and I think they drew up the sides of both panels and that's why they would not hang right.  They're on square.  They should be right.  But, the center of the panel hangs longer than the edges.  To be fair, they were made 12 years ago and my skills are improved greatly.

And, a green thumb update.  I've never been able to get an orchid to re-bloom.  I've tried and tried to start with tiny ones and get them to grow, but they always rot.  I stopped buying them because I couldn't stand to watch them die.  But, last year, I decided to buy myself one for my birthday.  It was in full bloom and the blooms lasted for about three months, then they all fell off in a week.  This time, I read several articles about how to grow orchids and I picked from them what I wanted to try and the plant thrived.  A few weeks ago, we noticed active growth and bloom formation and last week, the first two flowers opened.  There are more than a dozen other tiny blossoms forming. 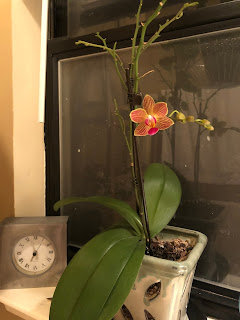 Okay, that's it for me today.  I spent a lot of last week looking at my boss like 'one of us is crazy, dude...and I think it's you'.  He is young and is not a good explainer.  I am a very good explainer and can pick the relevant details and tell a succinct story, then expand on that with details.  I shall be trying to pass that skill on to him.  Because when he explains something, he doesn't start with the forest, or the trees.  He tells a story by starting with the leaves on the ground.  And, after explaining each one, then he starts to describe the trees.  I've never been able to stand it long enough to see if he ever gets to the forest.  I've usually dashed out the room, head spinning.

Everybody have a great week!!  Lane
Posted by Lane at 6:03 AM

Both your leader/enders look great. A string log cabin will look fabulous. As for your boxers. ..it's a sewing project! The flower on your orchid is beautiful. I have black thumbs. I kill plants with kindness. Listening to your boss sounds painful. If you keep modelling good techniques, he may pick up on it. Perhaps designing quilts in your head while he is waffling may make it less painful?

Describing your boss....too funny! Your “ smalls” well done. Thanks for sharing. Mary

You have done a great job on the boxers. The log cabin quilt is going to be fantastic. Always wanted to make one and even started at one time. Gave all the fabric away...The orchid is very pretty. lum

Your nine patch scrap quilt gives me a lot of pleasure. Yellow is such a dominant color. I checked and there are only four (darker) yellow centers. So you have strong, darker diagonal "chains" and many pops of bright yellow. This is a very friendly quilt top.

You have so many fine skills.

Good luck encouraging your boos to pare his points.