May we be true

Another roller-coaster week of working from home.  It's starting to become routine and I will likely have trouble returning to the office.  It's so nice to be able to stick something in the over for dinner or start a load of laundry or water a plant that looks droopy during the middle of the day.

We had huge thunderstorms a few days ago where we got 4.5" of rain at our house.  It washed all the sidewalk chalk off but the next day, there were fresh inspiring messages for me to find and read. 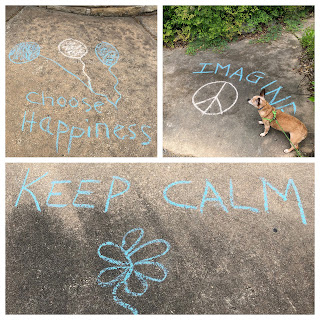 On Monday, I was asked to create a personalized mask for a senior for graduation.  On Tuesday morning, I designed the mask and started trying it out on a scrap.  On Wed/Thur mornings, I made the first one and on Thursday night, finished a second for the proud Mom.  Graduation is tomorrow, so I don't have a picture of the graduate in one yet, so I modeled.  It has her name, the year and her school logo.  I'm pretty happy with the way it turned out.  I don't have an embroidery machine.  The T was zigzagged with a regular foot, but the other letters are a narrow zigzag using a free motion foot.  I drew with a white ceramic pencil, then embroidered over it using a sheet of white printer paper as the stabilizer. 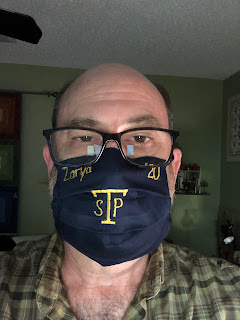 I haven't been baking sweets since Syd left so I wouldn't just sit around and stress eat sweets.  It worked, but a man can only have so much willpower.  So, on Saturday, I pulled out Linda's mixer and made chocolate chip-pecan cookies. 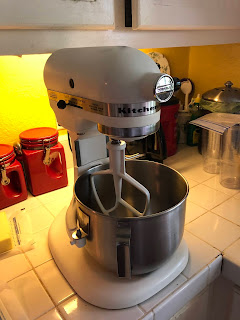 They're very good and I have probably eaten more than I should, but not as many as I could.

Sydney was supposed to take her hibiscus(es) with her when she went back home, but she was in such a rush that she didn't, so I'm still babysitting them.  These came off the same plant.  There were multiple salmon colored ones, but only the one red. 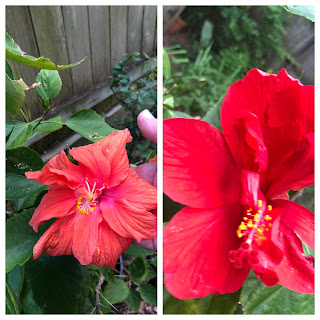 This daylily came from my Mom.  It's called Peaches and I'm going to get a couple bloom scapes off of it this year.  . 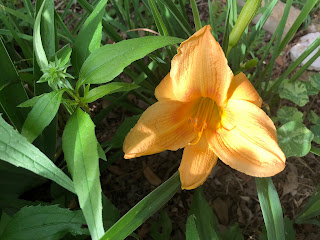 I'm still doing ditch work on the arc quilt   Over the weekend, I finished one section and am about 2/3 through a second and quilted for about 5.5 hours.  Slow, tedious work it is.  But, I've only got a few sections left and then I can start doing some fun free motion work in the black background.  Still not altogether sure what it will be, but it will be something.

It's hard not to get discouraged.  I made some serious technical errors on the quilt that resulted in some of the problems I had assembling it but didn't recognize at the time.  When quilting, I'm not looking at the forest that is this quilt.  I'm looking at the crooked trees, up close.  And, it's hard to face them, but at this point, there's nothing to be done.  I'm NOT taking it apart and doing it again.  I keep reminding myself that I learned a LOT about making a quilt from the mistakes I made here.  And, I have a new appreciation for well written instructions. 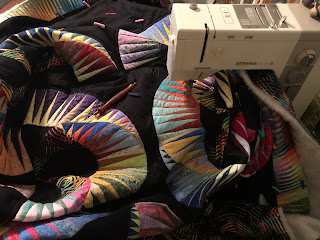 I went from 25 to 71 granny squares.  I think they look very cheerful set in that black background.  And, I can say that I have made a considerable dent in my bin of small balls of yarn.  I've also gone through a skein of black.  I'll have to decide how I'm going to buy more...I've bought yarn from Amazon before, so that might be my solution.  But, is there a way to buy yarn and support a small struggling business?  I'm going to spend a little time trying to figure that out. 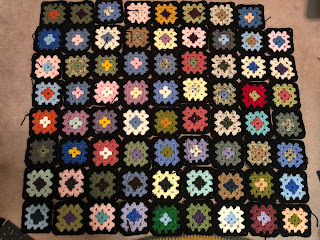 All in all, it's been a good week of gardening, crafting and baking while still working.  We had thunderstorms the other night just around bedtime and I lay in bed, watching the lightening flashes and listening to the thunder that felt just above us.  It started to hail and I thought about my garden and how rain was good, but maybe we could do without the hail.  Eventually, it quieted down and I drifted off to sleep, only to be woken later in the night when a follow-up came through, but after the thunder, I was off to dreamland again.  And surprisingly, the hail didn't do any damage to the garden.

There's a culture war going on.  It's a battle between people that are angry and willing to do or say or intimidate or threaten or lie about anyone or anything to try to maintain what they see as their superiority over everyone that is not just like them and who believe they are empowered to hate by a god, I'm just not sure whether which god.  I've started to realize how the nazi party took over Germany and why Muslims kill non-believers.  Their leaders created hatred and superiority and told them to use threats and intimidation to force everyone in line.  And, end anyone that that refused.

The power of good suffers setbacks and we're staring down the face of another setback and we can't let it happen.

The culture war is going to have casualties.  It's going to split families and friendships.  We're all going to have to choose one side or the other and live our lives according to the beliefs that informed that choice.  Sitting on the sideline isn't going to be an option.  The best we can hope for is to keep relationship with our loved ones so that when this is over, we can join hands again and become one people; the citizens of the United Stated of America.  We have to get back to the good that built our country and remind ourselves (and one another) that hate and anger and greed don't get us anywhere except more hate and anger and greed.  And, nobody is stronger than the weakest among us.

I listened to President Obama's speech to graduates from Saturday and I was reminded of what a real president sounds like.  Someone uplifting and inspiring who drew us close and helped us see the good things we could do.  We need more of that.  We need to end the culture war, then we'll need a time to heal as a nation.  Only then will we be able to move forward and embrace the good that we are capable of.

I wait eagerly for that time.

Til then, I crochet!

Wow!! Those awesome letters WITHOUT an embroidery machine? Way to go, Lane!

I had watched a series on the History Channel about Hitler coming into power. This was in the middle of the the presidential campaigns in 2016. The one candidate reminded so much of Hitler's rise to power. I was fearful then and the feeling is getting worse. I pray for a return to a more civilized existence. Thank you for sharing.

1. The custom graduate mask is an awesome keepsake for her to have! Very cool. And of course you didn't need no stinkin' embroidery machine for the monogram -- great reminder that there were always lower tech ways of doing these things before the computers invaded sewing!
2. So, as a liberal Yankee Christian raising white sons in the South, I came up with this easy litmus test to help my kids differentiate between what our family believes versus what a lot of other Christians around us are saying and doing and putting on bumper stickers on their cars: Jesus' main message is to love one another, and everyone is your neighbor, and ESPECIALLY those people you can't stand who are so different from you, those people ESPECIALLY you're supposed to love. Anyone whose "Christian values" are stirring up hate instead of spreading love is not following Jesus; they're following that other dude who tempted Jesus in the wilderness. This worked best for private conversations, by the way, but led to some awkward moments when my four-year-old was yelling at a stranger in the parking lot that Jesus still loves them but he hates their ugly politics... ;-)
3. Finally, as for the crooked trees in that magnificent paper pieced forest: I TOTALLY get it. I am the same way, and then I get comments from blog readers who lecture me about Amish quilters putting mistakes in their quilts on purpose because only God is perfect and how "only the quilt police would ever notice" and if it's "only for me" those mistakes don't matter... Grrr! That's why I love to come back to your blog, Lane, because I can identify with the way you're always pushing yourself to the limits of what you can do creatively and technically. You rip it out and do it over if you think you can do it better the second time. And I can totally relate to how, once you've gotten it as good as you can manage with the skills you have today, those little issues that other people might never notice can't be just "gotten over" in an instant. It's like you have to grieve that idealized perfect concept you had in your mind before you can move on to appreciate the slightly imperfect masterpiece that you actually created in real life. And when you're working on the quilting, you're scrutinizing the entire surface of the quilt with your nose about 6-8" away from it, so of course you see everything AND some of those piecing imperfections complicate the quilting process or even require a change in plans from what you REALLY wanted to do to something that will work better with what you ended up piecing. I love your paper pieced arcs, and I love that you are honest enough about your process to share your struggles and how you feel about them instead of only sharing finished beauties and success stories.
4. I could not even bring myself to watch Obama's commencement speech. I know I would start bawling. Our one glimmer of hope is that the Orange Foolius claims to have started taking the anti-malarial drug that can cause heart problems. Let's hope he really IS taking it, and isn't just saying that because he owns stock in the drug company.

I'm jealous of your rain. We did get two inches but we need more.
Have you ever done a Round Robin Quilt? It was a learning experience. Stressful because You're working on someone else's quilt. LOL. Working my 2nd Round Robin less stressful but I do still worry whether they'll like what I added to their quilt.

Your quilt looks like it's dancing - so much color and movement. You quilted around the arcs for stability? It gives me so much pleasure to see it up close.

We are in a pickle as a nation. I thought that the pandemic would pull us together, since Covid-19 can infect anyone. It did not.

Older people are the most apt to die from it. We are older and we are plenty careful when we go out which is not that often. My son is a nurse. If I were to be infected, I'd feel I let down the team.

Our spring lags behind yours, but our yard is looking good, courtesy of all the extra time at home. Flowers make any day, better.