Life is full of surprises

Lots of surprises last week, and not all of them pleasant.  Austin got snow, which is about as surprising as it gets around here.  I think the last time we had snow stick was 10 years ago.  It was falling fast and hard, but it was clumping into ice when it hit the ground.  The ground was well above freezing, and this morning, it's all gone.

Yesterday, I took the Tile Tango class by Becky Goldsmith as part of a guild class.  I'll be real honest, I was not sure how it was going to go and had told Rob that I wasn't sure how long I'd stay.  It wasn't what I've come to think of as a traditional zoom class.  The class was pre-recorded, and we would meet up as a group about every hour, then go watch a section of video, then get back together.  As we learned to do, we did, so when the video was cutaway appliqué, I appliqued my cutaway stem.  And, when it was outer points, I did one of the flower petals.  And, the leaves were done during the video about inner and outer curves.

The class actually started last week.  There were more than two hours of pre-work, and yes, I whined about spending all my free time last week preparing for class, including picking fabric (ugh, it took so long to pick such a small amount of fabric and I still didn't make very good choices).  Maybe if I'd done less grumbling and more applying myself to it, it would have been a more cheerful block. 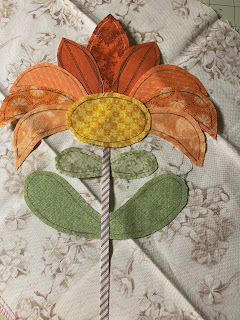 Even taking pictures and replacing pieces, I couldn't quite get this block to come out right.  Here's an earlier version on a different background.  There's an orange and gold focus fabric in the top petal that I used to pick the other fabrics.  But, then it didn't seem to work in the block. 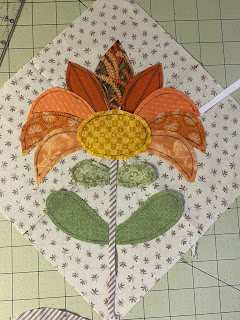 Anyway, I'm too far in to be moving fabrics around.  I didn't think I'd like the forum of the class because there wasn't the constant conversation, getting to know another guild member that you randomly sat next to and asking the instructor about their background and lives, especially someone that's been well known for as long as Becky.  But, you know, I ended up enjoying the class.  Becky was funny and vibrant.  She had good stories and was very personable.  And, during the class, if we had a question, we had her phone number.  We could just call and get an answer.  Honestly, her videos were so instructive, I didn't have any questions.  And, we have access to the class videos for two weeks on Creative Spark online learning. 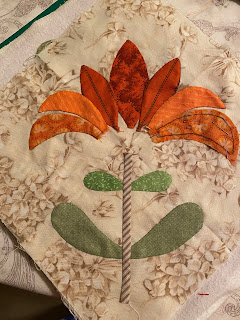 I enjoy appliqué.  It's a TV watching activity like crochet and knitting, or hand sewing.  I took the class because I admire Becky and because I used a previous Piece o' Cake book to learn appliqué and make the Simply Delicious quilt.  I thought it would be a good thing to get the tips and tricks that aren't in a book and add some finesse to my work, which has been okay, but not really great, precise work.  It's good from a distance and my Simply Delicious lemon will make you think "lemon", but there are some appliqué artists that can make you think, smell and taste lemon when you see their work.
This is the Simply Delicious quilt.  It doesn't have a label, but I think I finished it 3 or 4 years ago and if I'm not mistaken, I worked on it for 2 or 3 years before that.  It was an adventure.  One that I enjoyed sometimes.  And, when it wasn't fun, I'd put it away for a few months and go back to something else. 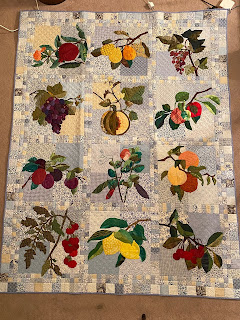 I'd like for this to be my next appliqué project.  I bought the pattern quite a few years ago, when Simply Quilts was still on TV.  I saw that the San Jose Museum of Quilts and Textiles had reproduced the original newspaper patterns and even though it was hard to find, I ordered a set.  I've had them, waiting until I got around to an appliqué project.  I want to appliqué them onto a tan background and if I'm not mistaken, I already bought that and have it here...and could get started if I didn't have so many other irons in the fire. 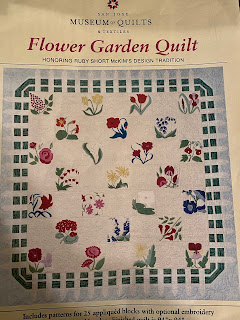 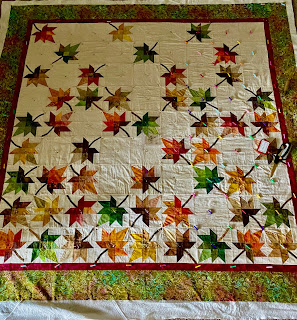 And, we had snow!  I know some of you will look at this and laugh, but here, it was a really big deal.  Imagine all the kids that saw snow yesterday for the first time. 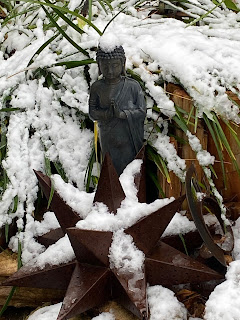 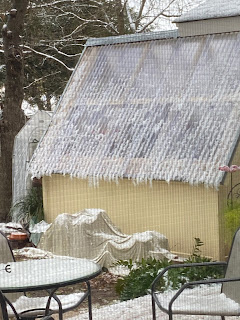 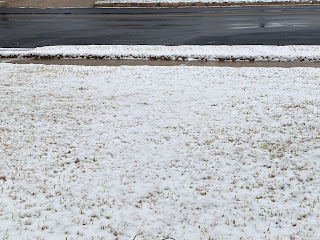 -----------------
Just can't talk about the insurrection today.  Too many negative feelings.  I was neither shocked nor surprised.  Only dumbfounded that there weren't more deaths.  And, repelled by the knowledge that everybody is tiptoeing around instead of taking decisive action against an attempt to overthrow the government by a racist radical right wing mob.  There's another attack being planned.
Everybody stay safe and be well.  Be kind, and in the words of RuPaul, "If you can't love yourself, then how in the hell are you going to love somebody else.  Can I get an amen up in here?"
Lane
Posted by Lane at 6:57 AM

This was a terrible week. It's been a long time since I watched so much television for so long as on Wednesday.

I worked at balancing that with visits with our children, appreciating my stable marriage, lots of cooking, and looking forward to reading you blog on Monday morning. Thank you for every entry and the time you put into it.

Elijah Cummings was right when he said at Michael Cohen's trial, "We are better than this!"

I'm disgusted that the insurectionists are now saying they are being sensored. Nope. Hopefully charged with treason but not censored from free speech. I'm not okay til dumps removed from the power to incite at least from the highest office in the land. He'll always carry chaos.
Now to your class... I had a class with Becky and I remember she put her hands around me, her chest into my head, and tried to stitch right in front of my eyes! I said, um, you're a bit close for me to focus.
lol
LeeAnna

Amen!
Thanks for sharing.
Mary

You do beautiful appliqué work. I love how the leaf quilt looks with the borders. Thanks for sharing your nice photos with us.
It’s a mess out there and a pandemic that hurts so many. The election is over and a new president will be sworn it so I can’t believe this was all acceptable four years ago but now it’s not. Such a double standard but then again we have had a dictator repeating lies so much he got people to believe them, Kathy