We were affected by the TX ice storm last week.  So many trees down.  It's very sad.  Lots of deadwood fell out of the trees and anything that still had leaves was likely to have limbs broken.  There was so much ice buildup that the trees couldn't handle the weight.  And apparently, everything that could fell on a power line.  We were without power for about 54 hours, from early Wednesday morning until mid-morning Friday.  Of course, we worked as a team on resource management.  Rob was in charge of power and I was in charge of food.  Rob took care of the battery powered lights and I took care of the oil lamps and candles.  And, we spent a lot of time in our recliners, near the edge of the hearth.  Temps were only around 30 outside and Rob kept it around 60 in our living room, and I spent the two days in my heavy red wool sweater and was very comfortable, most of the time.
These are some pictures of the ice buildup.  I thought this forsythia was toast for the year, but soon as the ice melted, it went into overdrive with blooms. 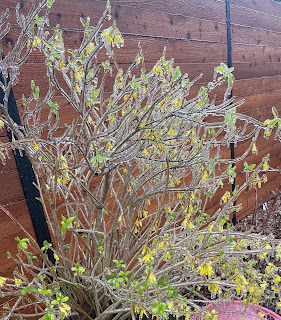 This is the huge oak in the neighbors yard on day 1.  The branches were bent to the ground.  That night, it rained more and this oak lost a lot of large limbs.  There was a huge limb from this tree that hung way too far out over our roof and last year, we had it cut back.  I'm so glad we did.  At the very least it would have been lying on our roof with the house supporting the weight.  Or, it could have come through the roof or fallen on our cars. 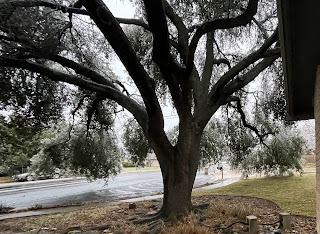 There were icicles hanging everywhere. 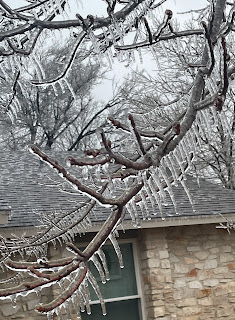 And, these photos are of us suffering.  We were so lost without power.  (I shouldn't make fun.  Other people did suffer.  We did not.)
Dinner day 1, soup.  Soup was easy and we ate a lot of it. 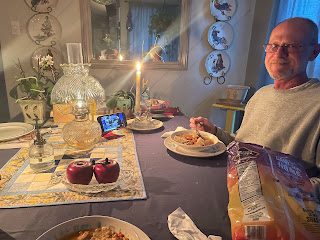 Snug in front of the fire. 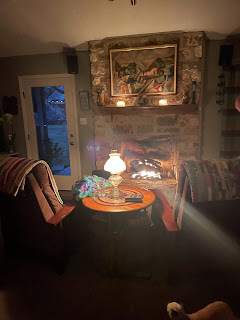 By day two, we were playing a game called 'eat it before it can go bad.'  We did really good with our food storage and only lost a little bit.  On day 2, the fridge was starting to warm up and I moved the cold stuff into plastic storage bins and put it outside where it was plenty cold.  Then, a friend loaned us a generator and we used it to cool the refrigerators down every few hours.  The freezers never got below about 32*. 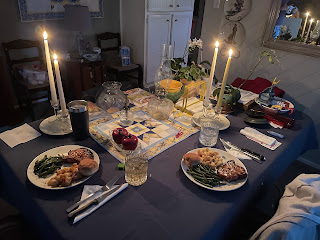 I needed a project that was big enough to see in limited light and that I knew well enough that I wouldn't need the pattern all the time.  I picked this afghan and finished it.  I never learned to like this one.  But, now it's made and hopefully it will go to someone who will love it. 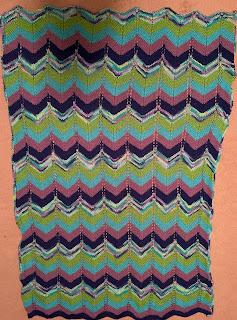 Even when we got power back, we were being advised to stay indoors because of the falling limbs, so I put the buttons on my latest shirt. 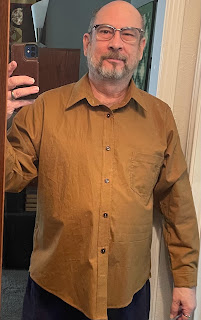 And, I bound this little quilt. 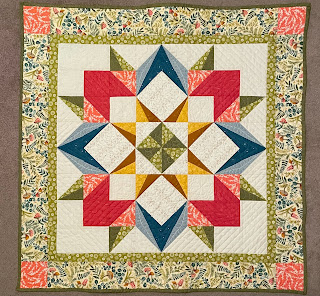 So that was our week last week.  Power is becoming more of an issue in Texas, so now we own a generator...or we will when the new one gets here.  We plan to keep the one we used and give my friend the new one, still in the box along with the motor oil she didn't have but was going to need to use it.
Everybody have a great week!  I hope all your adversities are easily overcome!
Lane
Posted by Lane at 6:04 AM 4 comments: