Always prepared.  That's how we try to live.  This was the last weekend to get ready for this week's repairs.  But, there was a little time for some relaxing too, because we were so prepared.

When I was relaxing, I was sewing or knitting.  My body was too tired to do much moving around, but my mind was still working 90 miles a minute.  Hand work helped take care of that.

I got this little leader and ender together.  I had laid it out and rolled it on a pool noodle, in a flannel backed table cloth.  But, I put it too close to the edge and pieces kept falling out of it, so when I was looking for something to do, that's what I picked up.  It didn't come out like I thought it would, but it's nice enough and will make a good small utility quilt.  I'll add some fun border to it and it will make a nice square to lay across the seat of a chair or across an ottoman or something. 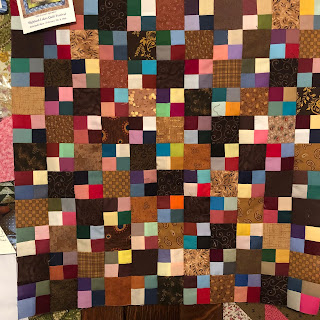 Or, maybe it's just fine and I'm not able to see it because it didn't come out exactly like I expected it to.

Anyway, we've had lots of rain and the garden is doing well.  Not sure I showed these, so if I did, sorry.  I spent some really relaxing time out there yesterday morning while it was still cool and watered the flower pots and pulled dead leaves.

I have this hanger that holds three baskets.  I don't plant directly into the coconut liner.  I put a large plastic bowl in that and plant in the bowl.  I have red geraniums, ice plant, and dusty miller in all three, but the dusty miller isn't doing much. 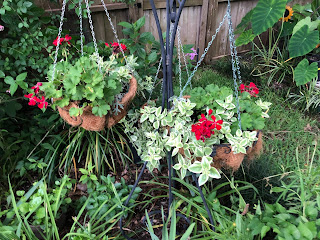 And, here is a little Gerber Daisy.  I planted this in a great spot last year.  And, then a larger plant came up and covered it and it almost died.  So, I dug it up and put it in a pot and left it to live or die and it lived.  I've had this for several years.  It's been in the ground in several spots.  But, it seems to like living in a pot better. 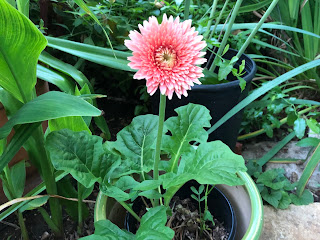 But, most of our weekend was spent lifting and toting and filling the POD.  We decided not to put the dining room furniture out there.  There are no repairs in the dining room, but there are a couple on the other side of the dining room wall so every thing had to move, but it didn't have to leave. 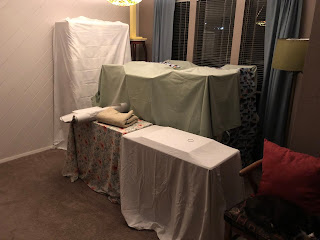 The garage hasn't been this clean since I bought the house in '98.  There is still stuff on the other side of the room, but this corner is clear. 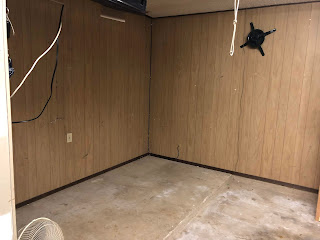 We finally found someone to take up the deck.  He came on Friday.  He was being weird about the price, so we just offered him an amount he couldn't refuse.  Sometimes, you gotta do that, because we were not able to go out and do that in a single weekend.  It took the contractor and his team an hour.  They had to unscrew 720 screws. 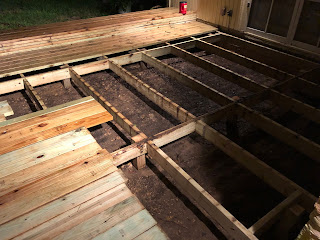 We moved all the furniture out of the living room yesterday and pulled the carpet and pad back.  Then, we unrolled it and put the furniture back so we could enjoy it until tomorrow night.  It's just the sofa and a couple recliners.  And, we'll need to cover the television with a quilt and some plastic.  All the little tables are in the pile in the dining room.

Remember that a couple months ago, I was turning the house upside down looking for some documents?  They were the documents from when I bought the house.  And, in them, there was a description of the previous repairs and the engineers report from when I bought the house.  And, the lifetime warranty on the repairs.  When I couldn't find that, I felt terrible, but we moved forward...mostly because we didn't have a choice.

Well, I found those papers in a box in the garage (even Rob said that wasn't the kind of thing I would lose) and was able to get the diagram to the repair company so they can make adjustments in where they dig.  And, found out that lifetime warranty was only for five years and expired in 1994.  That actually made me feel better.  At least I hadn't lost a document that was worth money.  And, the new repairs come with a lifetime warranty from a company that's been in business with the same name for a long time (that's important in a lifetime warranty).

By next week, this will be over and we will be waiting for the plumber and the guy to reinstall the carpet.  Keep your fingers crossed that the movement in the slab last year didn't damage any pipes.  That's another expensive repair.

Everybody have a great week!  Yesterday, Rob remarked on what a good team we are.  He focused on how long we could keep TV and entertainment operational and I focused on making sure I could feed us all week without cooking.  I made burgers and a casserole and have two kinds of sandwiches ready to go.  He figured out that if he wrapped the TV Tuesday night, we could keep a portion of our real lives going for two more days.

Those are very important things.

Rob is right, you are a great team. Seems like a busy household. Thanks for sharing. Mary

Beat of luck with the repairs, Lane!

My, my how busy you both have been. Pink gerbers are hard to find around here. The quilt is interesting, please do finish it.
Good luck with all the repairs, I agree, you and Rob work well together.lum