This weekend, we finished painting the living and dining rooms.  It's been a long process and we are both exhausted.  But, it's done.  We haven't completely moved back in.  There are still boxes we packed for the foundation repair in June that haven't been unpacked.  But, this is the basics. 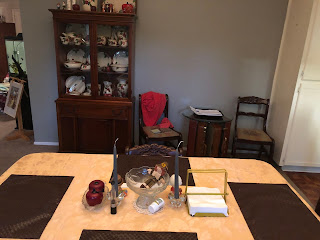 It took a little time to find the perfect accent color, but we took the time and went back to the store multiple times until we had found it.  And, we love it on the accent wall, which I forgot to take a picture of.  The only thing we didn't paint was the doors. That's a job for another day.  Maybe when we paint the foyer and the hall.  Those two small rooms, the hall bath, and our bedroom are all that's left and they will have to wait until after the holidays.  It feels so nice and fresh, and we are loving it and can't wait to see the Christmas decorations against it. 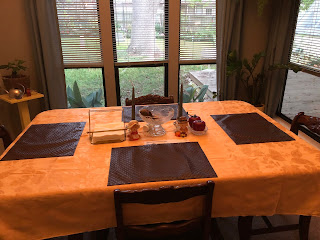 I also finished my sweater.  The whole time I was making it, it seemed like it was going to be huge.  But, after it was blocked and assembled, it fits just perfect!  (btw, you can see why we need to get to this bathroom!!!  pretty sure that paper was hung in 1978 when the house was built.) 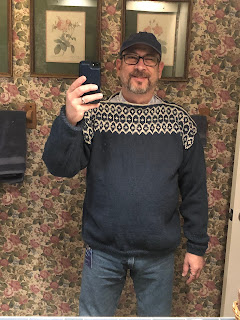 And, I finished a pair of socks I'd been working on during TV time.  My next TV time project is repairing a quilt for my niece, who burned a small hole in it, cuddled in front of a fire.  (that could have gone bad quickly, right?) 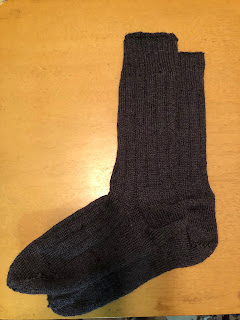 For my next tricks, I'm making a curtain for the living room that will pull the gray and our brown furniture together.  Yesterday, it was the table cloth on the dining table.  Today, it's pinned together as lined curtains for the living room.  (okay, that made me think of Scarlett's green velvet dress)  It's hard to get Rob and I to commit to curtains.  We usually end up with something that one of us voted "I don't hate it".  I had suggested a large plaid that had gray and brown.  I threw the table cloth on the window as an example and he said he loved it.  And, it became curtains before either of us could change our mind.  They really are perfect.  Except for that little bit of aqua, but I'll get over that. 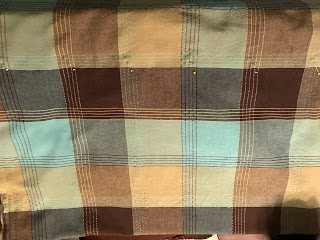 And, I'm still plugging away at the arc quilt.  For some reason, my blocks came out the wrong size.  They are each a quarter inch too small, all around.  I disassembled and re-assembled a block and it came out the same size, so I took the pattern pieces and laid them out and traced them on paper and they made a block a quarter inch too small.  It has to be the printer, printing the paper patterns a little bit too small.  That's all fine by me, I can certainly adapt, but I'm curious to know how that border is going to fit and how much its size was affected.  There might be some really creative sewing to attach it.  Anyway, the blocks needed to be squared and repaired.  I got a little overanxious when I was making them.  When I finished the arcs, I was so excited to move forward and make the blocks that I wasn't really careful enough about how I put the blocks together, so now I'm picking out a few seams, especially on the first dozen I made and putting them back together, more carefully.  And, once that's done, I can iron them really good and trim them.  But, once in a while, there's one that won't square and I have to "cheat" a little.  I drew squares the size I needed on this practice quilt and I'm spritzing the block really good and then pinning it to the shape I need it to be.  The fabric is there, but because of some bias mistake I made, it needs to be moved around to where I need it, and this works.  This is a trick I learned from Sally Collins.  They'll hold that shape while I assemble the quilt and, hopefully, the quilt will come out square.  Hopefully... 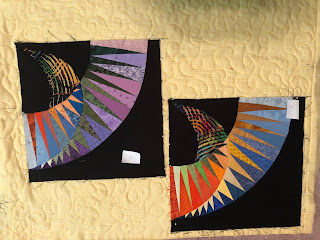 Everybody have a great Monday!  Next week is Thanksgiving.  Can you believe it?  We needed a few things out this weekend and there were shoppers everywhere.  Rob mentioned the traffic and we realized that people are already Christmas shopping.  Eek!!!
Lane
﻿
Posted by Lane at 6:02 AM

Congrats on your freshly finished projects, Lane! I'm sure it feels good to have things come together. You did a beautiful job on your sweater. The fit is just perfect!

Really like your color choices in your arc quilt. When I enlarge the pictures, those blocks pop.

Lovely sweater and comfortable looking socks. I'd wear those socks any day, any place and feel smug about it. Can't help but think, respectfully, of all the time you put into both.

You have so many fine skills.

Oh your socks and sweater are great. I was thinking, soon were going to read a post about putting up the Christmas swag. It’s almost time!
Thanks for sharing. Mary