there's work to be done.

I've spent most of the weekend in the yard, but there are also a lot of other things going on around here.  I'm finishing up a sweater I started in the spring.  And, I'm working on a pair of socks.  And, I know it always sounds like I don't get anything finished.  But, that's only because it takes me forever to finish something.

These strips are taking two forevers, and I need to make 4 pair, so that's an estimated 8 forevers total.  I've spent as much time as I can sewing tiny pieces together.  And, I'm around piece 180 out of 250.  I sew a point on each section, use part of a 9-patch as a leader/ender, iron the points, fold back the papers, trim the points, sew another point on, yawn, and once in a while, stretch and walk around the house.  It takes 8 seams to make a 9-patch and I've sewn 180 seams, so with the mistakes I've had to pick out and replace...yes, there have been some, I'm guessing I've made about 25 9-patches to use in something.  Someday.

It took me three weeks to weave in the ends of the Linus afghan.  That's boring work! Now, it's done and can go in the stack of finished Linus projects.  I need something to alternate with the sock I'm knitting during TV time, so I'll probably start another one soon.  I have 4 or five kitted up and ready to go, and when I'm done, I won't have any acrylic yarn left and I'll have a large bin to use for something else.  Something just as creative as yarn! 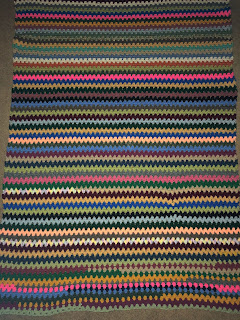 We're painting the living room.  It's a very nice shade of grey.  Before we would commit to it, we bought a gallon and painted it in 4' squares on different walls of the room to see how it was going to look in different light.  We'd already used a sampler to give us smaller patches to look at.  On one side of the room, it's very bright and kind of cheerful (considering it's grey).  On the other side of the room, it's a dark, dark grey.  The amount of light makes a big difference!  It's not as light as we had planned, but we had trouble finding lighter shades that looked grey; once we got to a certain lightness, it started to look silver.  Yesterday, Rob did sheetrock repair.  Not the final repairs, but enough to get us through the holidays.  We expect to have the foundation adjusted as the soil under the house moves due to winter rain, so there's no need to hire someone to fix sheetrock now and in the spring.  He did a really good job and I'm anxious to see it after it's painted.

We're also preparing for first freeze.  It won't be a hard freeze, but it was time to get the tender plants moved into the greenhouse.  I don't have greenhouse space for everything, so some plants had to go in the ground.  While I was out there, I saw this beautiful Cinco de Mayo rose.  There are several more blooms that I hope will open today. 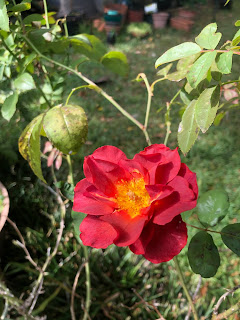 Everybody have a great day!  Enjoy Veteran's day and try to spend a couple minutes thinking about the veterans in our lives and what they've given in service to our Country.

Thank you for mentioning the Veterans. Mary

Lane, what do you mean "it always sounds like you don't get anything done?!" I am always in awe of how much you DO get done, between quilting projects, crochet, gardening, parenting, working full time... That border is absolutely stunning and it's going to be worth every seam, I promise.

Wishing you and your family a wonderful Thanksgiving and I hope you have a great time hauling out the holly as soon as your tummies have digested the amazing meal you're likely to be cooking for everyon. :-)