Taking time off work doesn't really mean not working.  But, the work is more fun.

I want to start with the arc quilt.  I put the two halves of the quilt together over the weekend.  I didn't join them yet.  I go through a period of hate on every quilt.  It's because nothing comes out exactly like the vision in my head, so for a while, I think I hate it.  Some people give up and end up with a UFO.  Sometimes, I do too.  Usually, I either do something to make me love it, or I get used to how it ended up.  I laid the first half on the floor and had my hate period.  That fabric used to make the comma shape in the corner of the blocks was too bright, too different in shading, too much.  It overwhelmed the rest of the quilt.  So, I started cutting and laying on pieces that I thought might work better.  I tried many different multi-colored fabrics and a steel gray.  I didn't like any of them better and decided to replace the corners with black quarter circles.  And, I was going to take those 3/4 circles and make them full circles by turning the four arcs in the center.  I was about to start disassembling the quilt so I could do that and decided to take one last picture so I'd have a "before" shot.  I laid the second half of the quilt down...and voila!  It all came together.  No additional work required...except to sew the two halves together and fix a few points that didn't match. 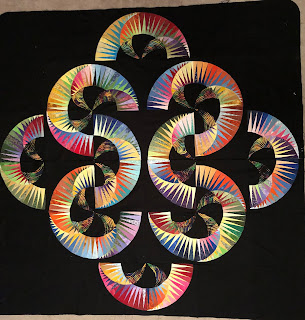 I barely see those comma shaped pieces and I certainly don't think I need to replace them.

I put it together to see how the border was going to fit before I made other sections.  Because the printer changed the size of the printed templates, the borders are four inches short.  Now, I'm glad to blame some of this on the printer, but honestly, that's not just the printer.  That's a mistake at the publisher that created the pdf files for printing.  I've never had a pattern I printed come out this wrong.  I print Barbara Brackman pdf patterns all the time and the most they've ever been off is 1/8".  I laid the pattern pieces on the floor, overlapping the seam lines and there's no way that goes together to form an 11.5" block.  The curves don't even match, so the only thing that brought this quilt together was all the bias.  So, my word of caution is that if you're going to print patterns from Perfect Paper Piecing by the Quilt Mavens, print the patterns, use them as templates, but before you sew a stitch, re-draft the block to make it the right size.  The bigger the printed pattern piece, the more "off" it prints.  Now, I've got to figure out how to add two inches to both ends of the border.

I don't like to give bad reviews because we all work hard on our quilts, but honestly y'all, I paid full price for this book.  I shouldn't have to re-draft the patterns.  Thankfully my mentor taught me to do that first, before I ever sewed a stitch.

Thanksgiving went off mostly without a hitch.  Syd brought the green bean casserole and the pumpkin pie and together, we did the rest.  The stuffing bombed.  It was the third time I've used this recipe.  The first time it was perfect and we all loved it.  The last two times, it was a total waste.  We ate what we could and threw out the rest.  And, I put an X in the corner of that recipe to remind me not to try that again.  I used a Bobby Flay recipe for the rolls for the second time.  And, for the second time, they were a flop.  X'ed that recipe, too.  Everything else was delicious and we ate until we were ready to pop!  Then, we washed dishes until we were ready to flop.  Then, we had pie and a nap and started all over again. 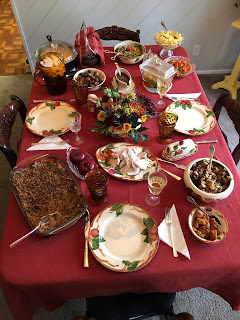 Yes, there is a cast iron skillet on my table.  The corn casserole was so beautiful that I couldn't break it up  to put it in a bowl.

I saw this yesterday and it speaks TRUE!! 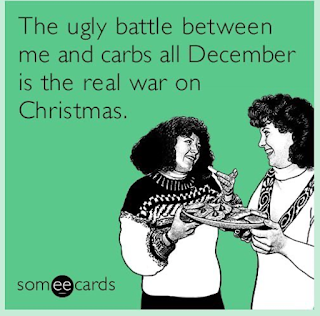 Then, as our tradition would have it, we decorated the poop out of the house for the holiday. 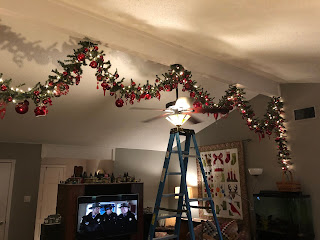 There is a topper on the tree now!  But we had to buy a new one. 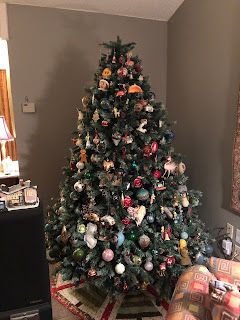 I believe every tree branch deserves an ornament.  Good thing I own enough ornaments to do that. 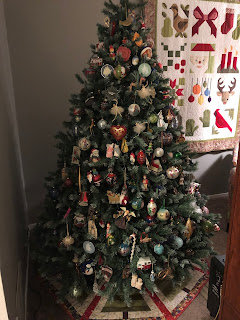 My ornament collecting might be a bit out of hand, tho.  We walked through the store looking for a topper yesterday and it was so hard not to buy an ornament!  These are all hand painted ornaments from the Li Bien collection at Pier One.  We will be buying ornaments from there every year until they stop selling them...but we wait for them to go on half price. 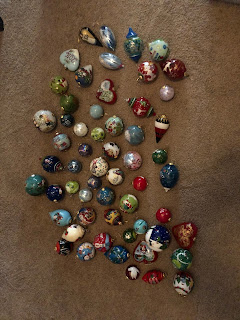 Yesterday, we caught up on chores and prepared for the upcoming week.  It's first week of the month and I took three days off last week, so it's gonna be a busy day for me.  Rob has jury duty downtown and I feel sorrier for him having to find a place to park than I do about him having to be on duty.  Everybody have a great week!  I have 22 days to diet before the next feast.

Interesting that you were dubious about the inner comma shaped pieces. I simply thought they were a clever choice of fabric, their curving color lines echoing the pieced arcs and variegated colors. I believe that's why your quilts are so successful. You spend time repeatedly evaluating if all the elements work together.

And your tree is lovely, densely covered with ornaments. I also enjoyed seeing your Christmas quilt behind it.

LANE!! Reading about how you had to work through hating that quilt and then seeing the photo -- it was like listening to Kate Moss talk about how she hates her thighs. Honestly, I am nearly as perfectionist as you are and I stared at that photo, just overcome by how AMAZING it looks. I cannot for the life of me figure out what you're talking about with a distracting "comma" somewhere. But I can totally relate to how you feel when you step back and look at a project and there is something about it that falls short of your vision, even if everyone else loves it. This quilt is going to be absolutely stunning -- it's ALREADY stunning -- so I'm glad you are back in love with it again. What a bummer about the borders, though -- are they intricately pieced as well? I'm looking forward to seeing how you handle this dilemma. Merry Christmas to you and your family!

Everything looks wonderful. You’ve been busy. Thanks for sharing. Mary

I'm loving the new quilt...but the Orange Peel is still my favorite! I was thinking about you folks a couple of days ago and wondering how Miss Sydney was doing! Your feast looks wonderful!! I always love to see the festive decorating for Christmas. I hope your week is stress free (hahaha) and Rob finds a parking spot first thing!!

Hi, Lane!
I think the arc quilt is absolutely lovely!
Happy belated Thanksgiving. My mom's dressing is the best--if you need a recipe. :)
Have a great week!
Betsy

My, my, my, I can share my Mother-in-law's dressing recipe if you like. Have Betty S. roll recipe if you would like.
But I have no suggestions about that quilt. Hubby says it will win an award if you enter it in a show. It is gorgeous... So glad Syd came for lunch. Wish our house was decorated now. We also buy the ornaments from Pier 1. Went today, 25 percent off. Hope you enjoyed your days off.