Ironing in the background

Last week, a team I'm a member of met for a virtual happy hour.  It happened late Friday, but during business hours, so I was only drinking water, but they convinced me to go make a drink (it didn't take much convincing).  When the call was over, I realized that the closet door to the studio was open and some shirts that need ironing were hanging there.  I doubt anybody else noticed, but I was embarrassed that I spent the whole call with my laundry hanging out behind me.  I'll try to be more careful as I continue to invite people into my home via video.

Last Friday was our 5th 1st wedding anniversary.  There's another anniversary later this week.  We have a lot of anniversaries to celebrate; the day we met, the first time we got married (limited marriage not recognized in all states) and the second time (full marriage, recognized in all states).  I gave us both new computers for our anniversary.  Rob got an iMac and I got a MacBook.  We are officially apple people now.  We've spent the week learning how to use them.  They're a lot different than our Microsoft based computers were and we're still busy transferring data from one device to another.  But, the gifts were a big hit and we are enjoying them.  This is the first blog post on the new device and I have a lot of learning to do. 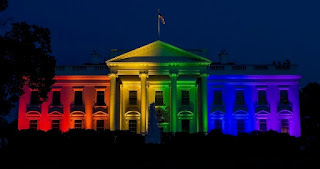 I made another feathered star block yesterday.  That would be 12, except for the puppy and kitten block that I'm going to use somewhere else.  I included it in this picture, just to round it out.  I've picked a red/white/blue theme for the last block and I decided I wanted to make it over July 4th weekend. 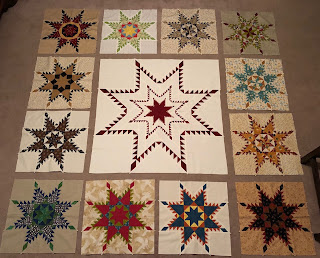 This weekend, we also sealed the deck.  Always a rewarding bit of hard work.  Rob borrowed the power washer from the neighbors and that certainly made it an easier project.  We have a team system built around this.  I brush the ends of the boards with sealer and he comes along with a roller and rolls them. 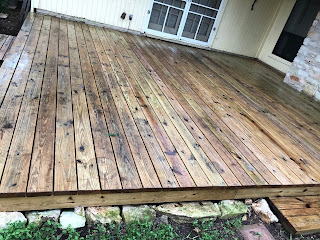 This little guy was in the garden yesterday when I was watering.  When I got close, he jumped and so did I.  He was very tiny. 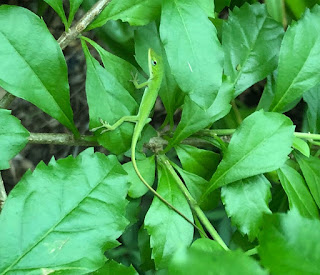 A couple of flower pics. 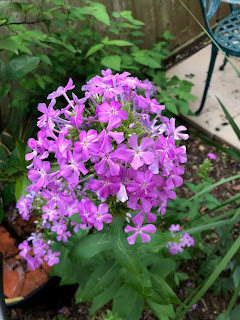 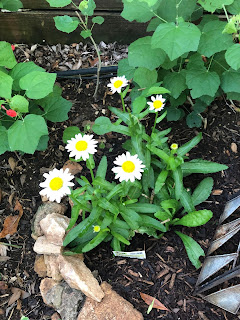 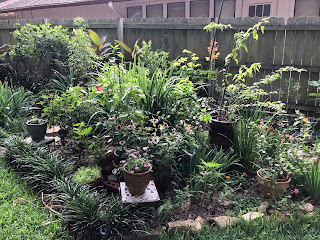 Everybody have a good week and whatever form your prayers take, please please please pray that we get this traitor out of our country without too much bloodshed.

Happy Anniversary! Isn’t it amazing to have your blog to look back over time. Your life is well documented. Thanks for sharing. Mary

Well said, Lane! We here in Canada just keep shaking our heads over what it would take for the so-called base to come to their right minds - but if they voted in a known cheating scam artist, I doubt there is anything that he could do to change their minds. I hope that this election will send him packing.

Anniversaries are very special moments to create and share with loved ones so happy you have that love together, Great gifts!!!
Totally support your powerful statement about the cult of a reckless power authority and how this is allowed to go on.
Enjoy your lovely home pictures too.

Well said we can only hope and pray that people will vote him out. I am scared that he will win by fraud if he can. It is a scary time.
Congratulations on your anniversary. I just celebrated my 60th.
I love to quilt and garden too, so it is always a thrill to see your photos.

You are going to just run up a feathered star block on the weekend? You have really fine piecing skills, but really, we already knew that.

Four months and a bit until election day. I'm looking forward to it, working on not counting my chickens too soon, and putting one foot forward after another to keep things going as best I can in my part of the world - much like yourself.

Congratulations for your anniversary. And may there be many more.

Happy Anniversary Lane & Rob. I hope you have many, many more anniversaries to celebrate. Doug and I just celebrated 40 years on June 28. Congratulations on the apple computers... they really are great toys. We have been an apple family for over ten years, the iphone, ipad and Mac books all play very nicely together. Take a photo with your phone it shows up on your computer and ipad.. same with text messages, music, books and movies. We love them. I would really enjoy a FaceTime with you.. don’t worry about the laundry that needs ironing.. the only stuff that getting ironed at our house are quilt pieces, binding or face masks. I’m keeping you in my thoughts and prayers especially now with the pandemic and private bone spurs in charge.