It was a rare weekend when I didn't have 47 things I needed to get to.  Saturday usually starts with watering the garden, but it rained on Saturday so I didn't even have to do that.  I didn't bake or clean...well, I did do some cleaning to be prepared for this week, but not enough to qualify as work.  I spent a lot of time working on Hurricane Hanna for the company, keeping everyone up to date on the progress and when we were in the "all clear".

Hanna made it humid here.  We got several short rain showers, 20-30 minutes at a time, so I spent the weekend quilting and stayed out of the muddy garden.

I got the borders on the feathered star quilt.  I spent most of Saturday on that and mitered the last corner early yesterday morning. 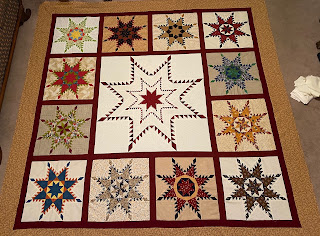 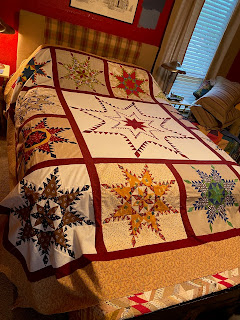 After all that excitement, I folded it carefully, hung it on a clothes hanger, and added it to the UFOs hanging in the closet.  I have a ton of quilt tops and I need to get quilting.  I spent most of yesterday assembling the hand pieced Christmas quilt I showed last week.  I've got two more outer borders to sew on and then it will be...a quilt top UFO, too.  Actually, I might just put it in the frame and hand quilt it and try to have it ready this Christmas.  I've already decided on a quilting design for it.  Plain, accenting the round shape and the "square" shape.

Not a lot of plant pics this week.  It's hot out there and the garden is showing  it.  Yesterday, Rob remarked on the number of coleus and that they were all from cuttings.  And, I do have a ton of them and offered to share with him.  I put together this little group of green and red.  They do really well hanging under this tree, as long as the squirrels will keep out of them. 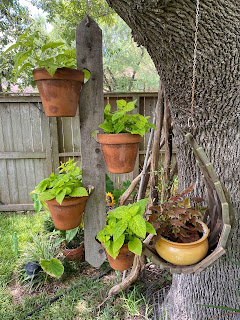 This was Friday when I was getting ready to walk the dogs.  Bella, the little one, hates having her harness put on and off.  I don't know why, but she will run and hide and cower until the harness is actually on her.  Then, she runs to the door, ready to go out.  If it takes me more than a few seconds, she's whining to go. The city came up with this idea that they would create "safe streets" during the pandemic.  Places where people can easily walk or ride bikes or play in the street.  But, as is all about Austin city leadership, they had to do it in the stupidest way.  Instead of closing off small side streets, they closed off the main thoroughfares.  They didn't do anything about the amount of traffic that funnels into these streets, just about the number of cars that can navigate safely down the street at once.  One car at a time down the center line.  We think it's ridiculous and nobody in our neighborhood wanted for a place to play in the street.  You can walk a block in any direction from our corner and get to a side street that is only used by the people that live on that street and when it's cool enough, there is basketball and bike riding in the street all the time.  Even the people in the neighborhood that advocated for this have now realized how badly it was implemented. 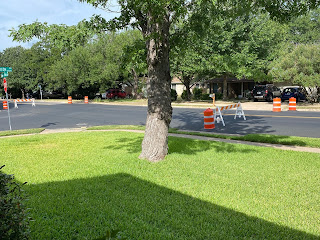 Okay, so funny story.  There was a knock at our door early yesterday morning.  A neighbor from several blocks away that we are friends with had been walking the dog with her wife and desperately and urgently needed to use our bathroom.  It was one of those hilarious embarrassing moments that happens sometimes that makes friendships closer.  She wanted to thank us for being there when she needed us and dropped off tulips later in the morning.  What a sweet idea and we are enjoying them very much. 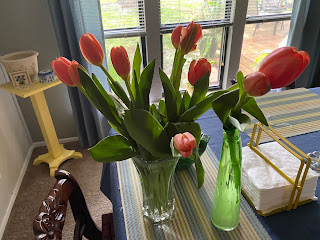 ----------------------
As things fall further and further apart, I find less need to talk about them.  I don't know about you, but I'm just not finding much to say.  One man is letting some small cabal make it look like he is singlehandedly dismantling the country, and a small group of sad old men that think they can take us back before people that weren't white men had rights is letting them do it.  And, I don't feel like I can do anything about that right now.  So, I'm cooling my jets and waiting for the next time it becomes necessary for me to speak out and take a public stand.  I spend time hoping my country will find its way again.

Everybody have a great week.  It's going to be busy for me.  My boss was out last week due to covid like symptoms but his test was negative, so we will be playing catch up on some high priorities this week.

Congrats on completing your Feathered Star quilt top, Lane! It looks like it has potential to be another masterpiece. And you're right... It looks fabulous on the bed!

Beautiful feathered star quilt top. It makes me feel warm and comforted. Warm, I don't need right now, but comforted is so welcome.

The feathered star looks great! I like that hanger the coleus in clay pots are on. I've seen standing versions, but not a hanging one.