I looked back at the weekend this morning and couldn't remember what we did.  One day it was cold and rainy and the other, it was sunny and warm, and our activities matched the weather both days.
Saturday was the cold and rainy day.  I couldn't seem to get warm.  We talked early in the morning and neither of us had plans to do anything but relax.  After yoga, I went right into the studio and got started on the Tiger Lily flower block.  I had added about 5 pieces during down times last week, but I sat in my chair all Saturday morning and finished the block.  Rob would come in once in a while to check my progress.  We basically watched TV all day, streaming the last season of the Dickenson series (the whole series has been a fun and funky twist of past and present) and some more Yellowstone and we watched Red Notice that night. 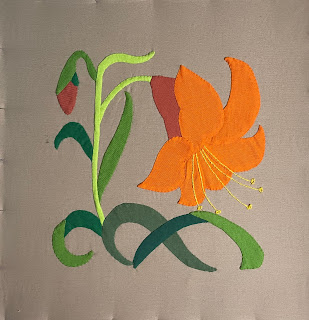 The next block up is cosmos.  Lots of pieces, and lots of embroidery. 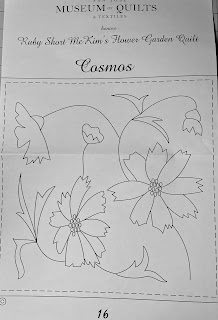 When I was done with that and it had been rinsed and was pinned down to dry, I started working on the quilt binding for the Linus quilt.  I got it made and sewn down, but I've only gotten about half way round with hand sewing it down on the back. 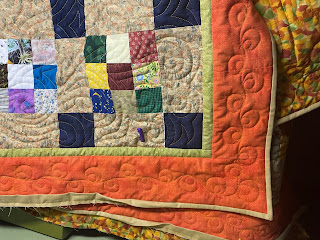 Last night Rob and I were talking and I need a new way to bind Linus quilts.  Does anyone have a trusted tool that lets you run the quilt and binding fabric through the machine once and sew both sides down at the same time?  I've tried machine bindings before by sewing the binding to the back of the quilt and then flipping it over and sewing it down to the front.  I can't seem to get the seam straight on the front of the quilt when I do that, so I gave it up, but may have to try that again and practice til I get good at it.
Part of it might be that I was trying to fold too much quilt into the binding and needed a narrower seam allowance when I sewed the binding on.  I love a stiff binding on a quilt that I'm going to hang, so I sew those bindings on with a 3/8" seam allowance.  That makes a tight binding that's pretty stiff.  For a bed quilt, I use a 1/4" seam allowance, which gives a very soft binding.  But, I haven't always known that and made some very stiff bed quilt bindings while I was learning that lesson (why is this so stiff?  I did it the way I always have...except I wasn't really doing it the way I always had.  Trial and error are a very effective teacher.)
Yesterday's weather was different.  It was sunny and warmer and we walked the dogs in shorts.  After a very early grocery run, we worked outside.  I cut almost all the winter death back and filled three cans with the refuse.  But, the yard looks really good  will look that way until it's spring and green again.  I'm looking forward to the new configuration.  Later in the spring, but hopefully before the spring rains begin, I'm going to re-work the garden path.  I have to do that about every 4 years, lifting the stones from the clay and re-setting them.  I'm taking out part of the path and that will give me mores stones, so I plan to fill in the path instead of a stepping stone path.  Maybe.  Who really knows what I'll do.  Sitting here writing this, I've had a different idea that I might like just as much.. 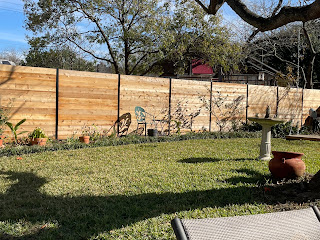 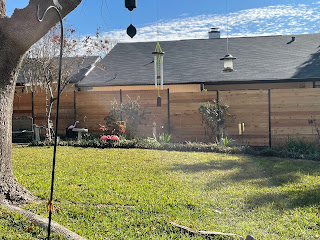 I'm trying to move to a more Mediterranean diet with less red meat and healthier snacks.  Yesterday was a bit of a contrast because I made hummus and baked a carrot cake.  That cake is not part of the diet.  But, I can't go cold turkey on the sweets right now.  In my recent reading, I've learned why stress triggers such a strong hunger response in me and am hoping I can use that knowledge to try to cut back on some high-fat salty daytime snacking.  The secret to resolving my weight is backing off or changing the snacks.  Hummus with carrot sticks is a better snack.  (my mind says yes but my Cheeto fingers say different) 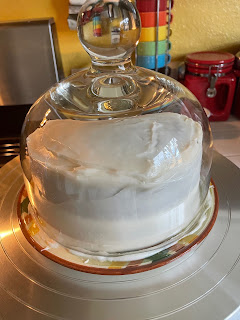 Work was pretty stressful last week.  I found out I'm being deposed in a frivolous case against the company and am still trying to build a relationship with my boss.  He says he'll schedule one-on-one meetings.  He says he'll schedule meetings to explain what he wants me to do.  But, he ain't scheduled no meetings and I've been working for this man for 7 months.  And, sometime this month, he's going to review my performance for last year, and I'm not sure how because he doesn't know what I do for a living.
He won't be the first manager I've had to teach how to manage.
Be well.  Have a great week!  Tell someone how you really feel.  It will help you both.
Lane
Posted by Lane at 6:08 AM

The situation with your boss is unfortunate. I’m sorry! For bindings, I use this machine binding method on all quilts now: http://www.52quilts.com/2012/05/tuesday-tutorial-susies-magic-binding.html It involves machine stitching it to the back and then to the front. On the front, the stitching is hidden because you are stitching in the ditch of the little flange you create by using 2 strips of slightly different widths that are pressed exactly in half (thus, one peaks out from under the other). On the back, you can see the machine stitching. but it’s just one straight line a little inside the edge of the quilt (see her last 2 photos), and I’ve decided that I’m totally fine with that! I’ve tried other machine binding techniques and decided I wasn’t going to be able to get the results I want. So this is my method now! Oh, and the only change I make is to make my bindings a bit narrower than in the tutorial, using 1.25” and 1.5” strips.

Looking forward to your ideas for cooking with your Mediterranean diet. I like it but need a good cookbook to follow that would help me understand ingredients. I tend to want a better style and then find buying the ingredients way out of my price range for groceries.
Been there too with bosses who have no clue what the job entails of their group. I have a feeling this will become worse in the workforce due to remote bosses and no hands on interacting at offices and at desks. Kathy

Your tiger lily looks great! For machine binding, the only solution is practice, I'm afraid. The good news is that it gets easier and easier. After about a dozen Linus quilts you'll be a pro. One thing that I find really helpful is to flip the binding to the front and press it before you try to stitch it down. A little light starch won't hurt, either. That makes it so much more even and smooth when you do the final stitching on the front. Good luck!

We know that you will train your boss in the kindest, most professional manner. Thanks for sharing. Mary

I found that a stitch in the ditch foot was a huge help for Susie's Magic Binding but the non-walking version pushed the corner out of alignment. I got the version for my walking foot which should work perfectly.

I haven't done standard binding by machine but I think an edge stitching foot would help keep the stitching straight.

Your applique blocks are looking great.

I have a friend who sews binding onto the back of a quilt then brings it to the front. She uses 1/4 inch Steam a a seam and presses it into place top then stitches it and shes done!

I am fascinated that you will be teaching your manager how to manage (and not surprised - you share so many great ideas of how to work well with people. My guess is that he is young, realizes just how capable you are, and is intimidated by the idea of managing you.

Lovely little cake with a charming just-the-right-size bell over it to keep it fresh.

Even on your Linus quilts, your quilting is less elaborate, but most of all, lovely.

The yard is fantastic!! Won't Spring be wonderful att your house. Love the Tiger Lily and cannot wait for the Cosmos.
Keep training that boss!!!! lum