A little overkill is a really good thing 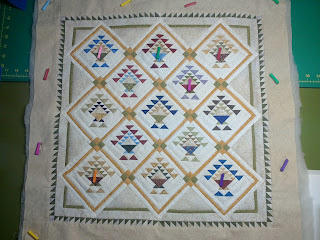 This is from a Sally Collins pattern.  It used to have another border, a dark green.  But, it never looked like it belonged there, so I took it off and while I was trying to decide what to replace it with, I decided not to replace it.  Without the border, it comes out at the maximum qualifying size.  I've been struggling with a backing for a 24" quilt.  That small, there were plenty of possibilities.  So many that I couldn't pick one.  I was sitting on the floor of the stash closet with fabrics strewn all around me.  This one was too small; this one was too bright; too modern; too large scale...too something.

And, then it hit me and in 5 minutes, I had my fabrics pulled. 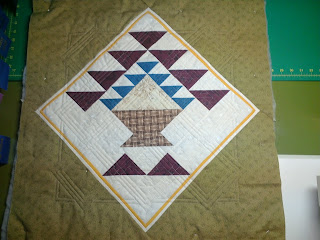 Next, I had to draft it...it took a lot longer than I expected to go from a 3" block to a 15" block.  I had to draw it more than once.  The original seems to be in 16ths of an inch and that's not fun math to try to increase.  Anyway, it's not exact, but it made a perfect back.

I haven't done this in a long time.  But, on a small quilt, repeating block quilt, I love to blow up the block and use it as a back.  It's a nice surprise.

And, the quilting is going well.  After it was pieced, I added the yellow border and then the white one.  They were supposed to be a half inch wide.  But, then the points all fell off the quilt and would have been cut away.  So, I picked out a little bit at the corners and re-sewed a seam and trimmed off some extra fabric and reduced the borders to a quarter inch wide.  And, now it all fits.  When I initially saw the error and pointed it out to Rob, we talked about cutting the points off to keep from completely de-assembling the borders and setting triangles.  Then, it hit me I could adjust it without picking it all out, and that changed everything.  I did the little bit of required picking out on the way to JoAnn's on Saturday.

We went to JoAnn's to pick up a binding for the analogous green quilt.  I found the perfect one.  And, I picked up some 108" wide backing fabric for a new tablecloth.  When it came time to check out, there were two women at the registers.  They were there together.  They both had a bunch of stuff.  One of them questioned everything nearly everything on her bill, comparing it to the advertisement mailing (she had a new cashier and she knew it).  I don't quite know what the other one was doing, but she needed the cashier to go get her a chair so she could sit and rest after it was done.  Both cashiers looked frazzled.  And, when it was over, Rob and I walked up, all smiles.  The cashier thanked us for our patience and Rob thanked her for hers, which took her aback for a second til she realized we were commiserating.  She was so grateful for our patience and smiles and understanding that she pulled up extra coupons so that everything I bought was either 40 or 50 percent off.  That was cool.

Course, she didn't hear us grumbling from a distance while we waited.  We were probably not as patient as the cashier thought we were.

But, it sure wasn't the cashier's fault.

The weather broke last week.  There were a couple days where the late afternoon temperatures dropped into the 80's as rain fell all around our house...but not at our house.  This morning, it's making up for it.  It's pouring out there.  That will water all the corners that the sprinklers just can't get to.  And, it's a good thing.  The garden was looking a little sunburned.

Everybody have a great Monday.  It's off to work for me.  Lane

Great solution for the quilt back! That's one of my favorite techniques, yet I rarely take the opportunity to use it. Best of luck in the guild challenge!!

I've missed you!!!
Don't know where you get all your patience, but it is paying off in this quilt. It is lovely and I know it will add to the challenge. lum