How do you know you're home?


You know I work in insurance, so you can imagine that right now, I am the weather.  It's about all I'm focused on right now.  Checking it.  Or reacting to it.  And, coaching my less experienced peers.

The trip to New Orleans went well.  I got to meet some of the people I work with all the time face to face.  I really hit it off with some.  People were excited to see me and welcoming.  There was one guy I work with a LOT and he was late, last one in.  We'd never met face to face, tho.  We had already done around the table introductions, but when he got there, we did them again.  I was last.  And, he got so excited that someone mentioned it a couple hours later, ribbing him.  It felt good to be someone people want to talk to.  And, it was interesting to see my boss's reaction.  I've always worked for folks that saw my popularity as a reflection on them...a good thing.  Not sure my current boss feels the same.

this one will eventually go.

Anyway, I realized when I got back to Austin Wednesday evening that there's a landmark I always look for when I fly in.  I come out of the secured area onto a landing above baggage claim.  You can see a long way.  And, in the center of this area of the airport there is a statue.  A tribute to a great Texan. 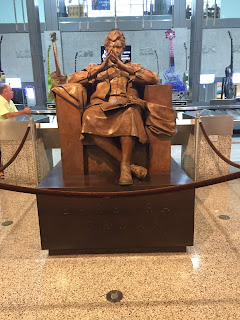 Barbara Jordan, first woman elected to the Texas Senate, first African-American elected to the U.S. House of Representatives from the state of Texas...from anywhere in the deep south.  Orator.  Civil Rights Activist.  If you ever heard her speak, you would not be able to forget that deep, well educated voice.  She spoke with such clarity and skill and calm.  And, whether we know it or not, we miss her today.

Be well.  Everybody have a great weekend.  If you're in the path of the storm, stay dry.  And, stay safe, no matter where you are.

So glad to know that a statue of Barbara Jordan provides a welcome to Austin. Yes, I miss her!

It's so true about bosses. I learnt a long time ago that the problem is much bigger than your immediate boss. Glad you had a good trip. Now...it's the weekend, relax! Quilt. Eat. Drink. I'll be Mary