Back from my week off last week.  I woke up on Memorial Day in a very lazy mood, and couldn't find the gumption to write.  A little writer's block maybe.

Still working on the sweater.  Not going to talk about it much, but I'll share that I took out 100 rows a couple Saturdays ago while Rob took a nap.  He knew something was up when he woke to find three balls of red wool yarn on the floor and me loading the sweater back on the needles.  It was a mess.  I took my usual approach of veering away from the pattern to compensate for mistakes.  Unlike in quilting, it didn't go so well, so I went all the way back to the original mistake and started again.  My downfall was the instructions to 'repeat the last four rows six times'.  To me, that meant the last two pattern rows and their companion wrong side rows.  Four rows.  There was math in the pattern that would have told me this was a mistake (it wouldn't decrease the number of stitches enough to move to the next step).  What the pattern meant was to repeat the last four pattern rows six times.  Anyway, when I really looked at it, the fronts did not match and there were 20 extra stitches at the top of each sleeve and on very close inspection, the raglan was way off.  At some point, I started doing the opposite decreases from what the pattern said to do.  And, I think the fact I was off pattern trying to compensate for the mistakes made me anxious and I wasn't enjoying the process.  I decided I could use what I had learned about 'what not to do' on my next sweater, or I could take out a hundred rows and use what I'd learned on this sweater.  I've put 67 if those hundred rows back in and can share that the sweater looks much nicer and I'm a lot more relaxed while working on it.  And, every few rows, I count my stitches to make sure I have the number I'm supposed to.  I seem to always try the shortcut first, but I'm not too proud to turn around and go back to get on the right path.

I did do a little quilting.  Not nearly as much as I wanted to.  I'd been putting this off because it required me to be creative.  In the corners of that black quilt, I'm going to put some 6" circles filled with circles.  I'm going to do my background quilting around those.  It took a couple tries, but I got my circles drawn and needle punched the pattern, and I'm using my pounce to chalk mark them on the quilt and it's working great! 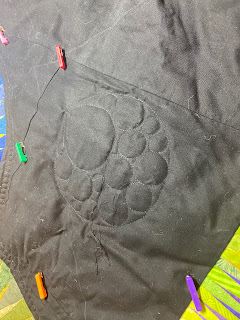 Those are going to float and I'm going to do a good bit of background quilting around them.   That's my next bit of creative.  It will have to be dense, but not too dense and it will have to have a lot of round shapes.

Do you see all the wrinkles in that quilt?  That's from leaving it folded up so long without working on it.  It should have been rolled on a pool noodle.  For the rest of the time I work on it, I'll fight with those wrinkles to keep them from becoming puckers in the quilting.  Don't let this happen to you!

We've had really bad weather lately.  Very heavy rains and strong winds.  It blew our fence down a couple Fridays ago.  The only thing kept it up off the garden was the chair that sat on Linda's back porch that we put on a pad over there.  The fence was pushing the chair out of the way when one of the legs dug into the mud and the fence couldn't go any further down.  The next morning, we stood it back up, and put some 2x4 props to keep it up and that should buy us a little time 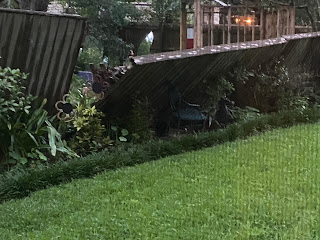 The garden is loving the extra rain, but not the cloudy days so much.  There have been a couple new daylilies.
This is a triple ditch orange daylily.  I know we're not supposed to grow these, but they are still a lovely flower.  They're supposed to change other daylilies around them to orange, but that hasn't been my experience. 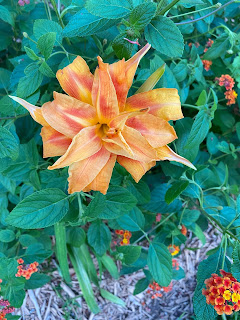 A couple posts ago, I talked about a green daylily.  My dad wanted a green and the only one he could find was the one I showed a couple weeks ago.  Then, he found someone that had this one, but wouldn't sell any of it.  And, my Mom talked him into selling a green plant and they sent me home with a chunk of it.  It hasn't bloomed in a while, but it did a little this year.  It's in a sunnier spot, so here's hoping for next year being a big year. 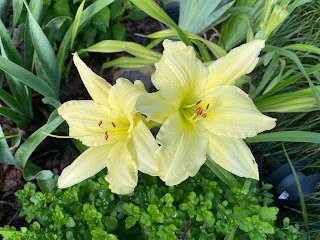 This one is called Peaches.  It's named after my Mom's dog.  It blooms very close to the ground. 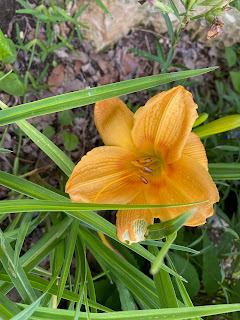 There are several more that I've lost track of the color on, and am waiting for them to bloom so I can write it down.
I don't remember what this little blue bloomer is called.  It hasn't done much over the years except spread a little.  This year, it surprised me with blooms I almost didn't see when I was stepping into the garden.  Fortunately, I did see them and took this picture.  I'm hoping I can find a tag on this one to know what it is. 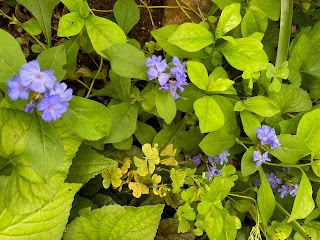 Happy Pride month!!  Gay pride means something different to everyone.  To me, it takes me back to when I came out.  It was a hard time in my life.  It is for almost every gay person.  It was awkward and uncomfortable, but I have always been glad I did it and didn't continue to live the lie.  The only thing worse than that awkward moment when I told an important person that I was gay is all the awkward moments of pretending not to be. 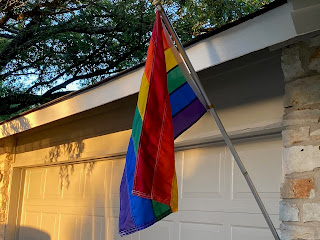 Anyway, most of the young gays coming out now have an easier time because people like me came out to family and at work and let people know we weren't all the stereotypes they'd been told we were.  Now there's gays in movies and on TV and in books and at family barbecues and a new person coming out as different (gay, trans, non, whatever) isn't nearly the surprise it used to be.
Everybody have a great week!  If you know a gay person, celebrate the fact that you were important enough for them to let you be part of their story.  And, remember that it's awkward to come out because the people you're coming out to ARE the important people.
Lane
Posted by Lane at 6:06 AM

Missed you last week. You have every right to take time off, but I also think it's nice to be missed.

Really admire your patience with the sweater - admitting there is a problem, the tricky business of identifying the thing(s) to be corrected, and then unraveling the sweater down to where the problem(S) started. I mean I REALLY ADMIRE all those thing.

Your blog is a generous gift to the world. You are a terrific dad, an amazing quilter, gay, thoughtful gardener, really good cook, loving friend of Linda (those entries will be helpful when someone I know is dying and how to focus on THEM), and your work attitudes would have been such a good template for understanding how to work with other more effectively.

All true! Your writing gives perspective on acceptance of everyone today as struggles are real and sad when voices are not listened to.
Healing begins with talking and sharing so I always appreciate your posts. We are all not cut from the same cookie cutter and a diverse nation so we all should live together much like nature does.
Knitting...well all I can say is good luck as I think that poor sweeter would be on to the donation station by now if it were me. Ha! I gave up trying to read a knitting pattern and stuck with quilting, Kathy

I think your little blue bloomer is Vinca Minor (periwinkle). Really looking forward to seeing your sweater. That read is gorgeous.

My Piece of Earth said...

The blue flower is not like the periwinkle in my garden, however, I am sure there are several varieties, so it could be the one that grows in your area.
Thanks for the idea, never thought of doing the prep work for quilting like you described.
Love your day lilies, beautiful colours.

A couple of gays I know are my favorite people. Very nice and caring people.

Welcome back, we missed you. Happy Pride Month. I think I bit my lower lip and gasped when I red you unraveled so much of the sweater. You know your going to be glad you did. Thanks for sharing. Mary