The focus this week was on having trees cut.  Our large ash trees that shade the back yard were damaged in the big freeze last February.  The advice from people we trust was to leave them and see what would recover.  Unlike many of our neighbors, we lived with the dead branches cluttering the view.  Others had the trees removed right away, causing a shortage of tree services, and as happens with supply and demand, the price went up and anyone charging a reasonable rate was booked solid.  By the heat of August, it was pretty clear how much was not coming back.  We're about to have the fences replaced and we realized we didn't want anyone pulling limbs through our new gate, at least for a while.  We decided to text the tree guy.  Sent him pictures of the damage, explained what we wanted in a few words including the species.  He replied on vacation two weeks.  We patiently waited.  He got back from vacation and replied he didn't do that kind of work anymore.  As annoying as it was that he left us hanging for two weeks, I get that.  He's a one man operation; he cuts and his wife picks up and piles.  This was a big job, so we called our second choice.  They sent a guy to do an estimate and a week later, he had a crew in our trees, taking care of business.  This tree was about 70% dead.  It had always been "scrawny", squeezed between two other trees, and it didn't make it. 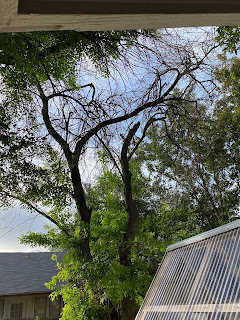 And, in our much larger ash, we had ends like this all around and at the top.  Anytime the wind blew, they'd come tumbling down, so not safe and not pretty. 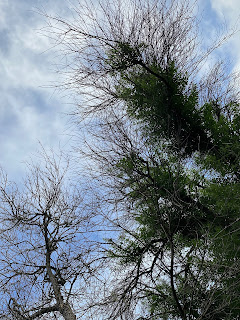 Our tree service did a great job.  There were four guys here for a day and a half, plus two hours late Friday evening doing cleanup.  They're still not quite done and have put us on schedule for another half day in a. couple weeks. 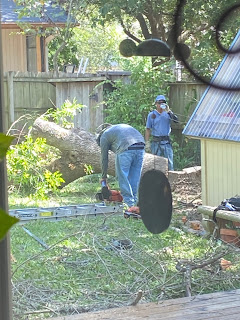 My only frustration was that the man that gave us the estimate was not very firm on the date they'd be here and I thought they were coming this Thursday, 09/23.  That would have given me two weekends to get everything up out of the yard that they might damage.  I got about half done Saturday before last, but thought I had another week.  He called Wednesday night during dinner to let me know he'd be at our house on 09/16.  I got up that morning, did my yoga and my walk and then I was in the back yard.  Sprayed up with bug repellant, I got started and using the dolly and a tall ladder, I got everything moved out to the edges of the yard, clumping stuff together so there were fewer places in the yard that I needed them to be careful in.  And, they were very careful.  They poked a small hole in the greenhouse roof.  We'll be patching that with shipping tape for a little while.  And, they flattened a chrysanthemum.  I knew going into it that Chrysanthemum would be damaged, it was tooooo in the way.  But, I've tied it up and and we will see.  It'll still be there next year.
My mind is getting more organized and so is my project list.  I was able to focus my mind and then my project list.   I've been all over the place lately and my projects in progress reflected it.  So, I focused on one thing at a time and finished my boxers.  That wasn't my best work and I think maybe I should stick to non-stretchy cotton quilting fabric, so no pics.  And, I dug in on the afghan that I'm not sharing until it's finished.  I got almost done.  Just five rows to go, so pics next week.  Once the boxers were done, I had to reset the Bernina to quilting mode and do some cleaning around my work space so I can get back to quilting the arc quilt.  That just leaves the hand quilted xmas quilt and the Ruby McKim bleeding heart block.  I can manage a couple projects in process at once, but 5 was a little overwhelming.
I think my lack of focus was about work.  The new boss and I aren't meshing the way I wish we were.  I thought it was me, but I talked to my teammate this week and she's feeling the same way.  Anyway, he does things different and I've been struggling to get used to the way he thinks, which has meant giving a lot of "wrong" opinions.  Last week, I finally was able to do something above and beyond and get that first "attaboy" I've been waiting for.  Should I be ashamed that suddenly things started to come back in focus and I immediately felt more relaxed?  Doesn't matter.  I'm not ashamed of needing what I need to be a top performer.
Okay, I've just looked up and realized the aquarium filter has stopped, so I've gotta go take care of that.  But, I'll leave you with this picture of a lemon cake. 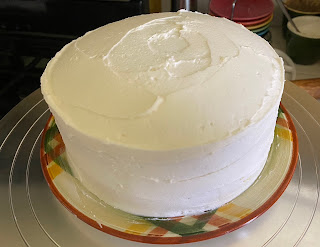 And, this thought for the day. 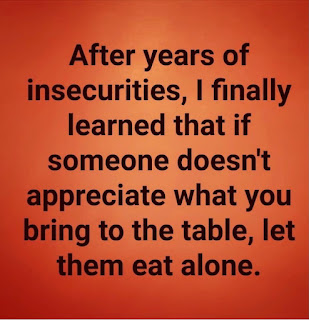 Everybody have a great week!  Stay strong no matter what.  Take what you need.
Lane
Posted by Lane at 6:08 AM

Oh my word! The tree….how did they do it? Don’t tell me it was just two guys, a rope and a chain saw. Yikes!
Cake looks delicious. Thanks for sharing. Mary

Our ash tress were destroyed years ago by some ash bore disease. Neighbor still has some in a wooded area in back of his house and it is a mess and an eye sore as they are falling over on top of other good trees so he should have done something about it years ago. Maples grow nice here and are plentiful so we enjoy their coverage even if it means raking leaves in the fall, kathy

I feel you on the whole "what will it take to make you happy, new boss?" feeling. I'm on a huge multi-year project, and we just got a new program manager (kind of like the Queen of all Project Managers). She has... a significantly different approach than the previous program managers. I'm feeling burned out and unappreciated. Luckily my actual boss is a) really supportive and b) also having issues with the new situation.

Either we will all get used to each other, or she'll vanish like the 2 previous program managers. It's just this phase of things that saps my will to live.

Changes are hard. Especially when it's a new boss and they change up the way things are done along with their expectations.
Glad you got some much needed acknowledgment