Still focused.  Still finishing things.  I knocked out a couple projects this weekend...and I started another one.  Because that's what I do.  And, that's the only way I'm going to get through my project list in this lifetime.
I finished the block for the Ruby McKim flower quilt.  Bleeding hearts.  Yes, there is still some blue ink in it.  I didn't follow the steps last night to make those go away completely.  I'm tracing the shapes with blue water soluble ink instead of pencil.  It's especially nice on the smaller pieces, but the piece needs hand washing after, and I forgot that and tried to spritz it.  Thank goodness I didn't forget and iron it.  Bleeding heart isn't something I've seen before that I can remember, so had to go to the www for pictures.  Not sure about that deep red.  This is block 13 of 25, so I've passed the half way point.  (I really should go back to pencil, shouldn't I?) 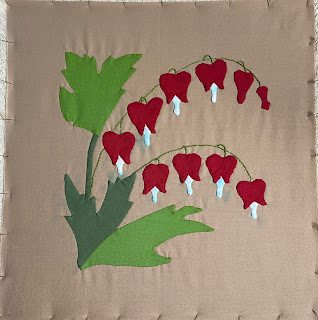 Here are the other 12.  I laid them out to feel inspired.  And, it's working. 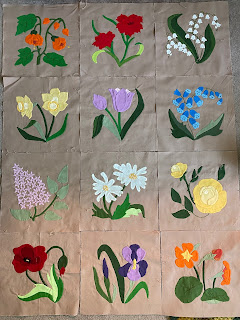 I've been working on this afghan for a while.  I've been designing it for several years, and each time navy, off-white or burgundy yarn came to me (I inherit a lot of yarn), I'd hold onto it until finally, there was enough to make an afghan.  And, there's still a lot left.  I could have made this project a long time ago.  I think the ripple pattern is perfect for a flag.  I didn't have a pattern.  I made it up as I went, and when I was halfway there, I realized it wasn't right and luckily, Rob suggested I lay it out the other way, and that worked perfectly.  It's perfect size for one person.  Rob and Syd have challenged me to add the stars in the blue field.  I even figured out how to make a white star, but it was complicated and when I thought of making 50 of them, it felt overwhelming and I gave it up after 5.  Last night, I think I came up with an easier way, so you may see this again soon. 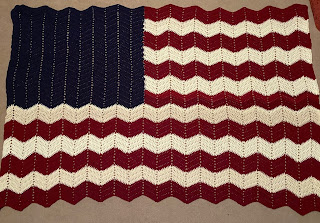 I can't do appliqué and watch TV.  That finger work isn't convenient when we're spending time together in the evening.  Oddly, I can both knit and crochet without having to look down at my work very often, which is convenient when the spaceship is taking off with the main character hidden in the trash compactor, and the damsel in distress on deck with the villain...or whatever we're watching at the time.  I've decided to make my next project a pair of gloves.  Somehow, I've ended up with several skeins of gray sport weight yarn and it's the perfect weight.  I've been hunting for patterns and found a couple I like.  Last night, I made my gauge square it came out exactly 4x4".  I think I'm ready to go. 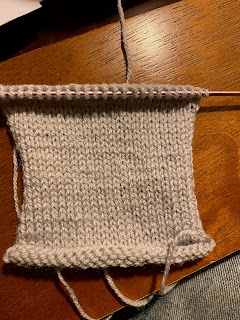 I've been taking new pictures of the back yard since the trees have been cut.  The team came back this week and finished.  The yard looks great and I expect that next year, I'll be able to grow tomatoes, which I haven't been able to do before and the year after, I should get a bumper crop of crabapples.  But, for this year, I'm keeping an eye out for plants that won't be able to take the additional sun so I can make plans to get them moved.  I'd created the garden based on part sun at most, and it is no longer part.  The sunny end is full sun almost all day, at least for a few years. 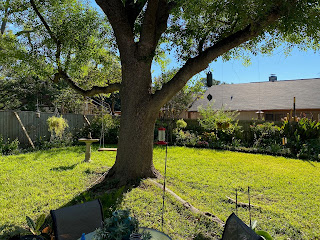 I couldn't resist taking a picture of the cat bathing the dog.  This doesn't happen often, but it's not exactly a rare occurrence either.  Apparently the dog smells bad and the cat wants to fix that.  The dog looks compliant, but she's not.  She's tolerating it, but after about a minute, she jumps up and the cat runs off.  I guess the dog doesn't want to smell better.  Or at least doesn't want to smell like cat. 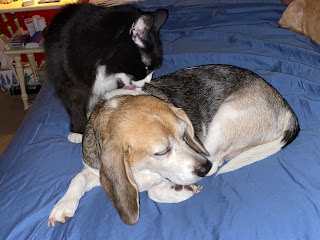 Stuff was weird at work last week.  My boss and I ended up on the opposite side of several decisions.  That's always awkward, right?  But, I clearly explained my positions and offered to adapt to new management.  Unfortunately, my boss didn't say anything, so I don't know if he agrees, disagrees, doesn't care, or is too busy to try to change my mind.  Hate that feeling.  But, at the same time, proud of the way I explained what I think and proud that I wasn't defensive in any way, just stating the facts as I see them.  And, it didn't hurt that in the end, after they'd done the research I requested, I turned out to be right and had guessed precisely what happened that led to the situation that needed a decision, and it turned out not to be a problem.  I been doing this for a LONG time.
I also had a peer's manager reach out to me to talk about the work I do.  It was clear she was comparing our contributions.  I hate that.  Everybody's good at some aspects of the job.  Some of us are good at stuff that doesn't get much attention.  I'm good at the stuff that does get attention and that sometimes makes other managers think they're employee isn't doing as good a job.  Sometimes I have to gently refocus a manager on the cool stuff their employee is doing by asking as many questions as I answer.  I'm also starting to pass along some of my high profile projects so others can get attention, too.  (But, good lord, I love those high profile projects that get my name spread all up and down the chain of command...  That does not make me a bad person.  I got those projects by saying yes when others were saying no to additional work.)
Everybody have a great week!  Find something you enjoy and enjoy the hell out of it.
Lane
Posted by Lane at 6:12 AM

Your work comments are always very interesting. I read them and think back 35 years and sometimes understand, "OK, THAT is what was happening."

You clearly are CAPABLE, have the perspective to sit back and look at what's really happening, and accept it. And THEN, you are secure and comfortable enough to redirect the conversation if needed (the conversation with a peer's manager).

Love that Bleeding Heart block. We have lots of those in Maine, but mostly in pink. My Nana used to love it so we have a lot. I think your afghan is perfect as is. Enjoy your day!

Exquisite applique, Lane! You did an awesome job with that afghan. Good luck with those stars, if you decide to add them!)

Your bleeding hearts-- and all your flowers-- look great! I love bleeding hearts and have several. They are a dark transparent pink, and there is also a white version, but it has much smaller flowers and blooms much later. Great afghan, too!