There was no quilting last week.  There was the hope that quilting would be done, but no actual quilting.  I had Friday off and spent most of the three days in the yard, putting down mulch.  There were also a lot of chores and some sewing...well, not actually sewing, but preparing to sew.

Rob found this shirt in Goodwill a couple weeks ago.  He really liked it, but it was a 2XL, so fit him like draping a sheet over his shoulders.  He liked it so much, I offered to take the side and arm seams out and recut the front and back to his pattern and put it back together again.  I took it apart this weekend and got it all starched and ironed and ready to go.  I made myself a shirt several years ago when I was new to shirtmaking that I like a lot, but was way too big and I did the same thing with it.  Finding fabric to make shirts is often the hardest part.  When I find a shirt that has nice fabric, I'll sometimes take it apart and re-use it.  It's generally cheaper than new fabric too, and if I'm lucky, I can keep the collar, button placket and pocket, which are the hard, fiddly parts of making a shirt. 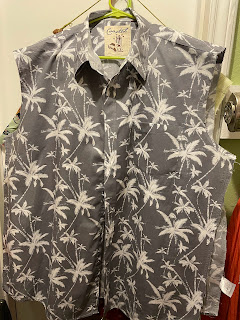 I also said I'd make Sydney a shirt.  She picked this origami crane fabric.  It's going to make a great shirt.  It's been laundered and yesterday it was ironed, so it's ready to go as well. 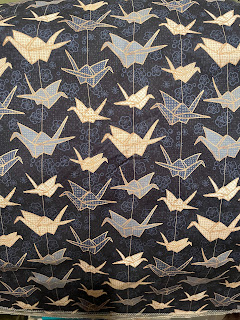 I'm putting mulch down now to save water later.  It's only June and I can barely keep the garden watered.  In the past, I've had a thick ground cover that shaded the soil and kept the water from evaporating.  After we dug everything up last year and trampled around in the garden, there's not nearly as much ground cover this year, and last week, I realized I needed to do this and I needed to do it quick.  Plus, I always love how the mulch makes the flowerbeds look better.  And, the really thorough weeding didn't hurt. 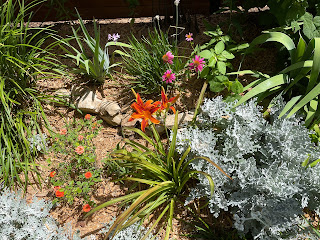 The rest of my pictures are going to be pretty random.
Chocolate meringue pie.  I used my Grandmother's recipe, but found out that the tin of cocoa that was under the nearly finished tin was not new.  It was another nearly finished tin.  So, I had to improv on the chocolate, using baking bars, which worked just fine!  I've learned not to turn my back on meringue under the broiler.  The distance between meringue and disaster is very short.  This one came out perfect, but I remember one year when I burned two meringues and ended up topping the pie with whipped cream. 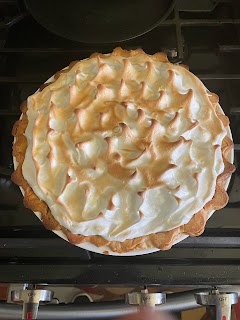 This is all six of Barbara Brackman's American Stars BOM.  I was worried they'd be more disjointed than they look together. 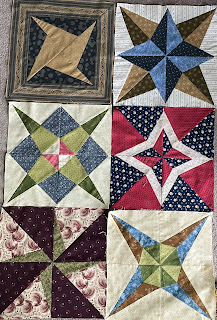 Bees at the birdbath.  I'm getting so many bees, but they don't bother the birds, and I'm glad to be a consistent source of water. 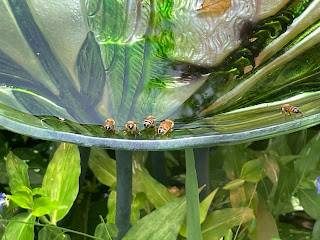 This is how much mulch you can get into the back of a Prius.  Believe me, I know.  I hauled mulch in the Prius on Friday, Saturday and Sunday. 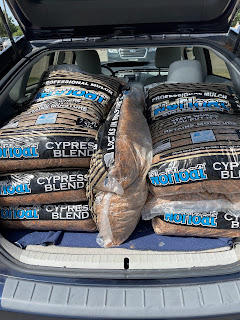 Everybody have a great week!
-----
I keep watching the Jan 6 Committee hearings, even though they can be hard to watch.  There's some very specific and damning information being provided there.  The saddest part is the people trying to defend trump.  And, his loyal followers, who were lured into his orbit by their refusal to join the rest of us in the 21st century.  trump told them it was okay to be racist and bigoted and to behave as little like the Bible would tell us to, and that's what they wanted to hear, so they lined up like the rats behind the pied piper and now they've got so much self-victimization invested in that, they can't walk away.  But, that's only the worst of them.  The best are watching and listening and paying as much attention as I am and they're seeing through the lies.  And, that's what we need to happen.
Who we support tells others who we are.  If you support people that would hurt me and my family then you're not really there to support me and my family.
Everybody have a great week!  And, don't believe the big lie.  The orange emperor has no votes and everybody knows it but him (like another emperor we're all familiar with who didn't have something).
Lane

Nice of you to resize Rob's shirt. You are smart to reuse the existing fiddly parts. His shirt and Sydney's fabric have the same classy vibe.

Your birdbath is world class. Add the bees, particularly with the bees bussily sipping.

I have tommorrow's hearing marked on my calendar.

Your meringue is gorgeous!
Kathy

Nice to see the Bees Thanks for sharing, Mary

well said... and support of the man who pledged allegiance to our country then tried to take it down means not supporting the constitution or our citizens. I am a child of immigrants, born here. I am a Christian and injured when I hear people say the man in question is as well, and he mocks them. I was stunned to hear so many people still believe he should not be prosecuted... that he is above the law. I support your family and love is love is love. Hate and power seeking is not loving. Breaking the laws of our country should not be tolerated.

The fabrics for both shirts are great! Oh, meringue… I’ve had some misses with it as well as some hits! Last time, though, I learned that it gets weepy when over cooked — not over cooked and burnt, just cooked longer than needed. It looked pretty and didn’t get anyone sick from uncooked egg though, eh? Ha!

Oh, Trump and the Trumpsters. What a shame that so many people aren’t applying critical thinking to him and the swirl of awful situations related to him. What a con he is!