I was enjoying some hand quilting on Saturday when I realized that my needle had become bent…not just a little, but too much.

I like a needle that’s a little bit bent.  It feels like it gives me better leverage when I’m stacking 4 to 6 hand quilting stitches.  But, if it’s too bent, it gets hard to quilt a straight line.

Anyway, I had no idea what kind of needle I was using, so I pulled out the box and pulled just a sample of the needles in there.  I don’t know how I’ve acquired so many needles…it’s like thread, just one of those things that accumulates.

Here are my choices. 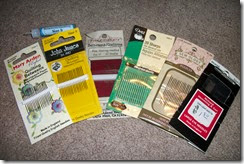 I like a sharp needle.  That’s what I use for any hand sewing.  I like the way the taper steadily up to the eye.  It makes it easier to slide the needle through the fabric.  But, it also means they aren’t as strong.  I tried using larger and larger sharps (the lower the number, the larger the needle) but I hit a point where the needle was too thick to quilt with.

Then, I moved to quilting betweens.  They’re shaped like a pencil, with a long barrel and then they suddenly narrow to a point.  That gives them a lot of strength, but it’s hard to push that point through.

I ended up using a between…the Mary Arden, but I’m betting my trick will work with any of them.  I never assess a needle based on the first few stitches, unless it immediately bends.  I stitch at least a foot before I assess the needle.  And, the between got easier to push the longer I used it.  So, I ran one several times through the emery strawberry on my tomato pincushion. 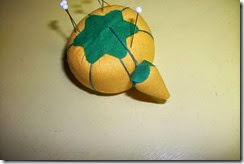 It seemed to smooth that transition and made the needle easier to push through the fabric.  I quilted a whole block with the same needle…once I found the right needle and the secret to using it.

I also spent some time moving furniture in the sewing room. 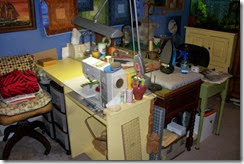 We had hit that point where it was easier to redecorate than to clean.  Plus, redecorating makes it so much easier to clean, right?  It’s like doing a chore and getting a present for it in the form of a new space.  I dusted it all. 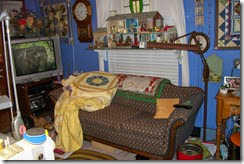 Next time I get the urge to move stuff around, I need to remember that this really is the only layout that works. 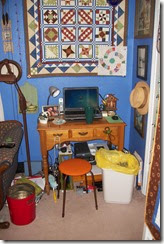 I’m not done yet.  I still have a few small piles of things to find homes for…or that just need to be moved to their home.

These pictures make it look so cluttered, but really, it’s not.  There’s plenty of room for me to spread a project out and lots of places to sit and sew and lots of machines to choose from, all usable with a minimum of moving stuff around.

But, the real test doesn’t come until I try to sew in it.  I decided to bake cookies yesterday afternoon instead of sew.

Then, I ate some cookies and wished I’d sewn.

Anybody have experience with one of these? 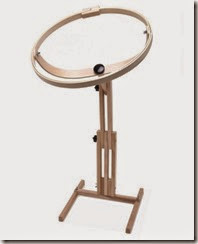 It’s the Quilters Hoop Wonder Stand and available at JoAnn’s online.  I’m wondering how stable it is, especially the feet and where the hoop joins the stand.

Be well.  Two more days of work and then it’s over for the year.

Give me some of your energy. I made cookies and I should give it up. I think it is the stove but my husband bakes the frozen cookies and they come up great. I did shortbread and the dough just spread out too much. Merry Christmas, Happy Holidays. I miss hand stitching something for 2015.

Ooh, I love that you have a cozy sofa in your sewing room! I wish I could fit a sofa or at least a comfy chair in my sewing room. Now I have to bribe my family to come and hang out with me in here, because they have to lay on the floor -- the most comfortable seating I could squeeze in here is a child-sized bean bag. :-)