I spent most of June working on the Guild's raffle quilt, which is red, white and feathered stars.  The feather points in my block are made from leftover scraps from the blocks I pieced for the raffle quilt.  I had a bunch of hst's left over, so I sewed them up and used them here.  I added a red from stash and an off-white that was the same shade as the raffle quilt, but a solid, not a tone on tone print.  They all go together nicely 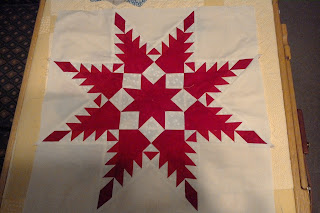 In July, Rob and I got married on Independence Day, so there is more of a plan being made for that block.  You'll have to wait to see because I'm not entirely sure I can pull off the plan.  But, I'm gonna try!  I want to merge those two events into one block.

Summer is half over and Sydney has not found a job.  We're giving up, I think.  She really needs to be 18 to be hired.  And, she's too lazy to actually be trying.  And, while we can make her more qualified to work, we can't make her older.  So, she's working for me... and because my lovely daughter is who she is, doing everything a couple of times before it's right.

Again, nothing we can do about that.  At this point, she has become who she is, and only she can change it.  We just keep sending her back to try again.  And making her speak to us nicely.  Teens are so surly.

Okay, so not much going on in my life right now.  I've been hand quilting and if you've ever done that, you know exactly how slow it goes, so nothing new to show.  It's especially frustrating that I'm pulling out old quilting to replace it with better quilting.  But, really, the secret to a great project for me lies in my willingness to rip out and replace.

I've got plenty of practice at that!

Everybody have a great Thursday.  Two more days before the weekend begins.

Advice for Sydney for next year. START EARLY! Some of the summer recreation programs and parks in my area start hiring as early as February/March for the Summer season. Yup! That Early Bird wins again. The good news is once you are in, most places hire kids summer after summer. If she hasn't done one yet, have her work on an activities list this summer. It is kind of like a resume geared to high school kids...It is also used when applying for scholarships and such.

Another idea that I have seen work for friends is sending them to a summer camp as a Counselor in Training. After doing that they become eligible for summer jobs the next year. Have not had actual experience with it myself and still have and unemployed 23yr old in my basement watching TV and sullenly cutting grass. Not sure whether to blame the economy, my leniency or his laziness, or a combination of all three.

I am loving that star, it really makes me think of snow flakes.