I wonder what he thinks now....

First, before wondering what Rob thinks, I made this feathered star block this weekend.  On a whim. The scraps have been in a basket next to my machine for a while and I just picked it up and went for it.  I have an idea for where this is going, but no commitment yet.  The is a project that can go as far as the red and white scraps I have will take it... 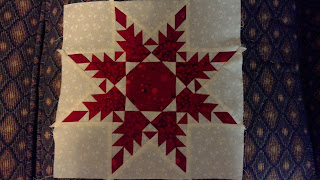 About a year and a half ago, Rob contacted me about a Bernina machine he and my mentor had found in Goodwill.  The machine and cabinet were $40 and did I want it and when I wrote back and said yes, he said good because he'd already bought it.  It's a Bernina 817.  Lots of these were used in classrooms.  Seems to be a good machine.  Basic.  Six stitch patterns.  Strong. 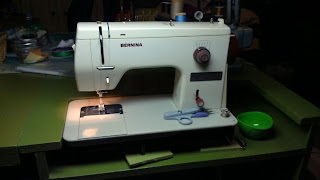 It didn't really fit in the cabinet it was in, and the cabinet was in pretty bad shape, so that went back to goodwill.  But, the machine stayed.  The machine made a horrible noise.  Turned out that the belt was so tight that the machine couldn't operate.  And, it might never have been oiled.  EVER!  I spent a day or so working on it and got it to work...sorta.  At least I thought I had.

The other night, Rob came into the studio to watch some TV with me while I worked on a new tablecloth.  I was hemming it with this machine.  And, it was making a terrible racket.  And, I couldn't figure out why.  It was very distracting during the show we were watching and I wondered if he was still glad he found this machine and brought it home for me.  And, I felt a little embarrassed...he doesn't come in the studio to watch TV often and I was a distraction...but we all got through it.  And, yesterday, I started working on the machine again.  The belt was too tight again and I'm wondering if that came from using it, setting the belt tension while the belt was warm, then when it cooled it was too tight.  I reset the belt while it was cold and then I started oiling the machine again.  And, I worked on it as long as I could.  Then, I started again this morning.  Now, it's just purring along.  It's not as quiet as it was when it was new.  But, it's a good solid quiet machine for piecing.  I'll have to let you know how it quilts.

Now, I'm going to pull out a different machine to do some decorative stitching.  Off to...well, I'd like to say sew...but it's really work.  That blessed pastime that pays the bills.

I always enjoy the stories of your wonderful machines. I just received
a Montgomery Ward sewing machine and it purrs like a kitten.

Your Bernina just needed some TLC. Love the feathered star.

One of my Featherweights is breaking thread again; I need to spend some quality time figuring out why.