I've made progress on my Broken Star quilt. 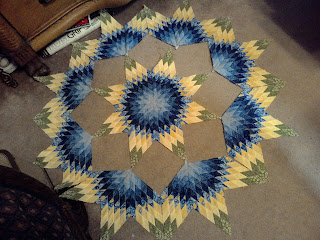 If you're going to make this quilt, I suggest you plan to make extra diamonds with the plan to throw them away.  Make a set of 8 to get a feel for it and then make the rest.  They're all made from stripsets so it's really easy.  It's just very precise.

How about some helpful tips.  I'm using the free pattern I found at Quilters Club of America, except I'm making it in half size.  So, My strips are cut at 1 1/4" wide and finish at 3/4".

First suggestion is to be VERY careful of your seam allowance when you sew the strips together.  I didn't pin.  I used the method that I learned in the shirtmaking class.  But, I was very careful to keep my edges lined up straight and not let them wander.  In retrospect, knowing what it would have saved me later, I wish I'd pinned them.  Where they did wander (and they did), it made a problem.

When I cut my sections from the stripsets, I basted them with a long stitch.  This served two purposes.  It helped stabilize the bias, and it gave me a mark where my seam allowance was going to cross the seam. 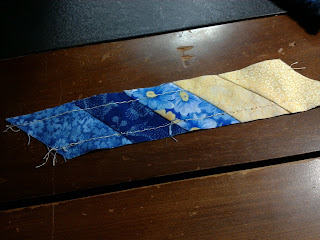 When I pinned two sections together, I aimed a pin straight down through where one of these marks crossed the seam allowance and then into where the adjoining mark met it's seam allowance, like a nail. 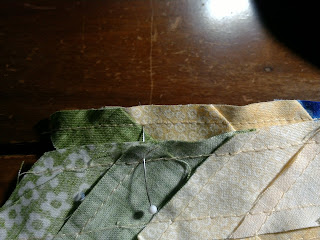 Then, I pinned from the side to hold them together for sewing.  Most of my seam allowances match because of that.  (I need new pins, don't I?) 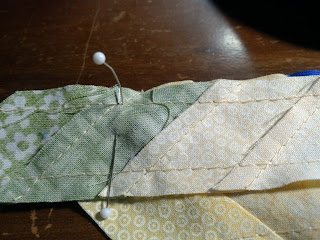 The next tip is pressing...not ironing.  As you're building the strip sets, build them a couple strips at a time...(two sets of two, then add the middle strip to one of those, then sew the two sections together.)  Then, fold the new strip back and finger press it, making sure the line doesn't curve.  It's not likely to at this point because it's straight of grain.

But, folding it back and finger pressing, then pressing it with the iron is essential for sewing the diamonds together.  When I didn't, I stretched the pieces.  I was ironing from left to right and pushing the tiny diamonds out of shape.  But, when the line was finger pressed straight and then I just laid the iron on top of it without moving side to side, there was no distortion. 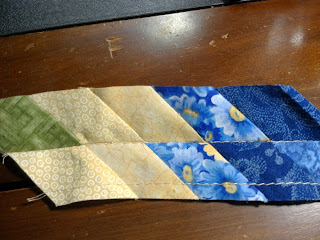 There is going to be a lot of bias to pick out later.  But it made this project so much easier that it was worth it!  Well, I say that now.  Check with me again when I'm actually picking it out.

My filler squares are going to be paper pieced.  I drew the first one.  This is close, but when I colored it in, I knew it wasn't right.  I want it to make more of a curve and that all feels forced into the center...like I grabbed the block and squeezed.  Anyway, this seems like a project for the protractor, in addition to the ruler. 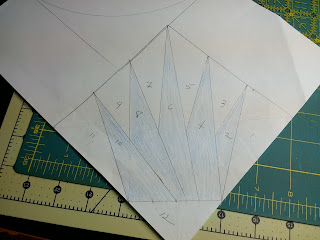 That's it for me.  Everybody have a great Wednesday!

Absolutely gorgeous! Love this pattern and the colors you selected! Thank you for the tips... a star quilt is on my list! :-)

That is going to one BEAUTIFUL quilt (and one that I don't plan of tackling any time soon!!) Hoping the pieces and parts go together better than you think. I salute you for taking on such a challenging project!!

This is very exciting! I LOVE star quilts, but I know I don't have the skills to tackle one yet. Curious about the basting stitches, though -- are you planning to remove all of those stitches? If so, could you have sewn the basting stitches with water soluble thread to stabilize the bias edges, mark where seams will cross, but then have the thread just dissolve and vanish when the finished quilt makes its maiden voyage through the washing machine?

I'm impressed with your ingenuity, Lane. Just a tip from someone who's worked at this scale: starching your fabrics before you cut makes it so much easier. The person who taught me also had us mark the seam line at the intersection with a fine-point marker, but you accomplished the same thing with your basting stitch.

Beautiful, thanks for sharing!