I'm torn today between talking about what I did this weekend and what I thought about this weekend.

First, you all blew me away over the weekend with all the beautiful encouraging feedback.  It was much appreciated.  I don't plan to stop blogging and after that, I'm hoping I can blog a little more often.  So, I'm spreading my weekend projects out a little.

I really needed a relaxing weekend.  I'm not quite sure why I was so on edge last week at work.  But, when I would get home, I was exhausted and stressed.  I planned a mix of cleaning and gardening and sewing and needlepoint.  Sounds great, right?

I did get a lot done.  Mostly the stuff other than cleaning.  Oh, well.

One of my projects was getting the binding on the analogous green quilt.  I got the last hand stitches in last night.  I'm a little worried about that wavy border.  I'm worried that blocking isn't going to make that go away. 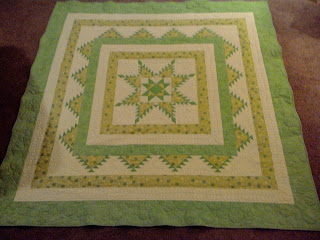 It's wavy because the quilt isn't evenly quilted all over.  It's very densely quilted in the center and more loosely quilted around the edges.  The idea was to quilt it densely in the center, where the piecing is small, then more loosely as the pieces got bigger.  But, there's a reason that judges feedback sheets have a place where they can just put a check mark next to "evenly quilted all over"...it's important.  The only real fix is to go back and add more quilting.  Just not sure if that's what I want to do.  I might have to try blocking it first and see how flat it gets.

I really didn't mean to build a yarn stash for needlepoint.  I really only want to do one project and needed a little practice before tackling it.  But, end up with a stash I did.  So, I decided to make a project with it.  Rob and I talked about it and we decided on two pillows.  So, this weekend, I drew out the pattern and did a small test square to see how much canvas a piece of yarn would cover. 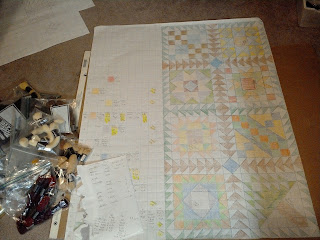 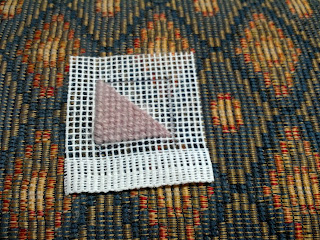 Okay, so now I'm a pattern designer, right?  So, I sat down and figured out how much of each color I'd need.  And, then subtracted the yarn I have.

And, these two pillows were going to cost an additional $50.

But, boy did I have fun drawing and coloring.  Like being a kid again.  I guess I see why adult coloring books are so popular now.

We watched the news from Charlottesville this weekend.  I am shocked and horrified.  I grew up in the south.  I've seen institutionalized racism.  I've heard the jokes.  I even told a few when I was really young.  And, I can remember talking to my parents about racism when I was a young man.  (I was such a dumbass...I remember judging my Dad for saying he had black friends instead of just saying he had friends, in a time and place where just having black friends was remarkable.)  A family member recently told me a racist joke and then acted like there was something wrong with me because I didn't think it was funny.  I was so sure that the U.S. was beyond such a display of public bigotry tho.  That we were ready to accept one another as people.  Equals.  That the struggle for trans rights would be one of the last struggles.

But, I was clearly so wrong.

So, it's my responsibility to speak out for acceptance because I am part of a minority group that has received our share of bigotry.  And, all bigotry hurts at least two people; the one that receives it, and the one that believes it.

Everybody have a great Monday.  And, practice acceptance.

Do you know it's reassuring to read about your memories, your growing up, and most of all about acceptance in a world that seems to be going off track more frequently. Reaching for a metaphor, it's like finding an oasis in a dessert.

The green quilt was really something. It was nice to read all the comments on your blog. Everyone of the same opinion in that we adore your blog! Mary

That green quilt really came out really nice. Where or what you going to do with it?
Thank goodness my momma raised me to respect everyone. When I lived Kansas City I rode the city bus a lot. One I drifted to the back of the bus and the drive told me to get back up to the front of the bus. I couldn't understand why. I was around 10-11. I moved because he told me too then he told me why. When my mom met me at the bus stop I told her what happen and she rimmed that driver out. I got to sit where ever I wanted after that. This was in the 60's.

Some people are just crazy stupid.

I've been reading your posts for more than a year now, but never left a comment. Today, though, I want you to know how much I appreciate your quilts, your viewpoints, and that you're willing to share some slices of your life with all of us! You are touching lives in ways professional bloggers never will. You probably have lost some readers because of your political views. But at the same time, maybe you've helped a few people see you as a person instead of a statistic or a label. That's the first step in breaking down barriers and changing minds---learning that we are all more similar than different, have things in common, and that good people come in many varieties.