Left up to my own devices, I generally make trouble.

Maybe not so much this time.

I am working with a new laptop.  The Surface is very convenient.  But, I'm a bit over the tiny keyboard.  And, the tiny screen.  It will be a great tablet for when I don't want to lug around a larger and heavier device.  But, I'm glad to be back on a full size laptop.

July 4 was our anniversary.  We've been officially and fully married for two years.  Time will tell if we still get to file joint tax returns, but we've been together for 18 years, and not being married isn't really an option, no matter what anybody else thinks.  And, after all that time, I still feel like I'm getting to know the best of him, especially now.  Relationships get tested periodically.  It's not whether there are tests.  It's how the relationship weathers the test.  And, in times of stress, we are at our most synchronized.

I've managed to squeeze in some quilting time.  I quilted a good part of the afternoon on Independence Day.  And, I got one block quilted.  It came out exactly like I thought it would  Which is totally not how I wanted it to. 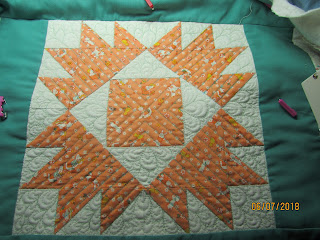 This is a 30's reproduction quilt.  I want it to be comfortable to lay under and to use.  But, this densely quilted it won't be comfortable for that.  It needs looser quilting in the white background.

Unfortunately, I'm in the mood for some really dense quilting, so even though I just made up a half dozen bobbins in this thread, I think I might pin baste something else to work on.  Something I can go hog wild with.

I've also done a bit of needlepoint.  These are things I got from Linda's.  She and I bought this the last time we were in JoAnn's.  She took it out of the package, but that's as far as she got.  I got a good bit done last Friday when I spent the day with her. 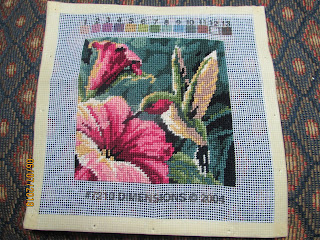 I showed it to her and she gave it compliments, even when she flipped it over and saw the back.  The back is a bit disorganized.  Like my thoughts have been while working on it. 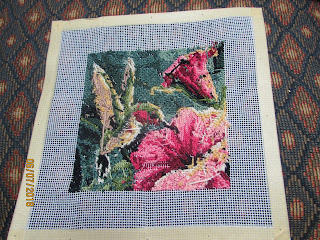 Oh, well.  If it gets framed, nobody will ever see that side.

I started this yesterday. 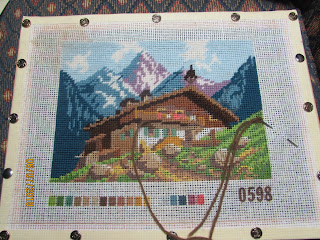 It was already well underway when I pinned it to the frame.  I don't think this was Linda's work.  The back of this one is a nest of loose ends.  That's not like her.  Maybe she inherited this from someone else, and now I've inherited it.  How many times can one thing be handed down?

Linda had a good week.  Her decline has slowed a lot.  We see it because we are there every day.  But, most people are deceived into thinking she is getting better.  Yesterday, I noticed that when I extended my hand for her to re-position herself in the bed, she couldn't lift her upper body.  That was new.  And, they've brought in oxygen.  And, I don't know whether it's because she had an especially active Wednesday or just the new normal.  She had a shower and a hair wash on Wednesday and tamales we brought in for lunch.  Yesterday, she had chicken and dumplings and baked apples.  But, I can't bring food in every day, so I'm working with another friend of hers to have him bring in food a couple days a week for the duration.  And, to help her eat it.  And, to remember the bib because none of us is in practice at this.

It takes a village at the beginning and at the end, I think.

The new parts came in for the kitchenaid mixer yesterday so reconstruction will begin soon.  I'm very anxious to get that begun.  The mixer made an awful screeching sound on speeds 3-7.  Above and below that, it worked fine.  There was a bearing burned out.  At least that's what I hope it was.  We will know soon.

Everybody have a great weekend.  I'm going to continue to personalize this laptop.  And, then get on to my electrical repairs.

Our Dear Lane! Sounds like the life is being sucked out of you. Control-Alt-delete.....reboot....regroup....recognized your strain. As Tom Hanks would say, "if there's something that makes you laugh, then every day's going to be okay". Find something to laugh about. Lord knows you've been able to make us laugh. Mary