The new appliances have been delivered.  Tariff pricing has been avoided, if it happens.  We got through the whole thing with a lot of laughs, a few frowns, a couple of times walking to opposite ends of the house for a few minutes, no shouting and a minimum of sighing and giving one another that look that says "that's the second stupidest thing ever uttered by man."

The guys stayed long enough for us to install the fridge and the stove and then we put the dishwasher in the slot and it did not fit.  We thought we had bought a flat front dishwasher, but we had really bought one with a matching handle.  And, the drawers on the side of the dishwasher couldn't open past the handle.  That wasn't going to work.  That's where I store my baking tools.

So, we went out that evening and bought one from a big box hardware store that they had in stock.  Funny story.  When this all started, I needed a dishwasher.  That was all I was shopping for.  Then, we decided to look at all new appliances and the old fridge started to go on the fritz.  The dishwasher we bought is the very first one I looked at and wanted.

The fridge and stove are Samsung.  The stove was the piece I chose everything else around.  It has the double oven.  A shelf slides in that divides the top and bottom and there are dual controls.  Take that shelf out and it's one big oven.  The door has an extra hinge, so I can open just the top half of the door, or the whole door. 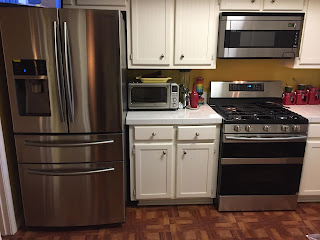 Friday night, we were getting water through the door of the fridge, but no ice had made, so I wasn't putting anything in because there was a chance we'd be sending it back.  I read the "troubleshooting" section of the owner's manual that basically said, 'relax old man, give it time to cool off'.  And, overnight, it made ice.  I got up in the middle of the night and pushed the button and heard the icemaker moving ice, so I slept better the rest of the night.

It was intimidating to get up Saturday morning and make breakfast on that shiny big stove.

The dishwasher is a Kitchenaid.  It is silent.  I can't hear a thing.  In fact, when the convection fans in the oven turn on, it sounds like water running in the old dishwasher and more than once, I have turned quickly to see where that water is coming from. 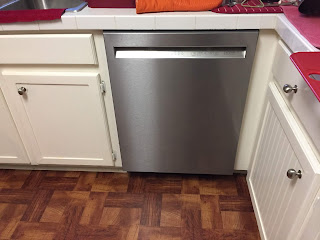 Just as we put the last fittings on the dishwasher, we heard a drip.  The kitchen faucet.  We both looked at one another and said, in unison, 'no, not replacing that today.'   And, we had a big laugh. 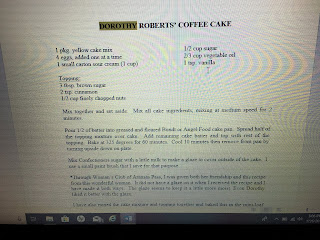 I put Linda's Kitchenaid mixer together with the last part that came in the mail on Saturday morning.  I used it to make this cake.  I took a video of it mixing the batter, and not making that awful sound. 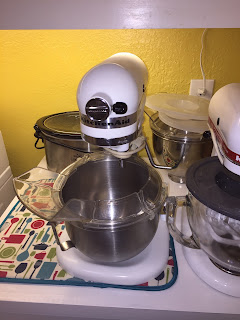 We took cake to her and I showed her the video.  It made her cry a little.

She is still with us.  The hallucinations come and go.  We saw her on Saturday and Sunday and both days she was bright as a penny.  I've found that the nurse's aids call me in to help do things that put Linda and I in awkward situations of seeing her in partial states of dress.  And, we've worked out a system where we just don't look one another in the eye.  It's a skill that came in handy yesterday when I helped her change from a soiled t=shirt.  It's funny what you can not see when a friend needs you not to see.

Still no quilting.  But, I have a new stove, right?  I cooked a lasagna and a batch of cookies yesterday and roasted an orange glazed tenderloin.  Sydney came in from work and said 'something smells good, what's to eat?' and Rob said 'nothing that you can smell, that's all for later.'

Everybody have a great week!  I do not know how my week will go.  Not much happened last week while I was out of the office, so I'm hoping it's a relatively quiet week for me.  Be well.
Lane

Your kitchen looks great. Like a show home. mary

can't cook like that here, it is too doggone hot!!! I envy the new appliances. My stove is 20 some years old and I would love a new one with a glass top. Enjoy the kitchen some of us will be envying you.

Congrats! on your fancy new appliances. Here's hoping you get the dishwasher and faucet situation resolved soon!!

will you let us all know how the oven works out? because that is just the model I am drooling over and so would love some unbiased information. Thank you. Isn't it a joy to cook when the appliances fit into your cooking style? I am lucky in that any appliance I purchase will be an upgrade from what I have.

Linda's mixer is the largest Kitchenaid - what a treasure. Wonderful that you got it fixed and running. Now you have two workhorses in the kitchen.

Linda is a fighter, isn't she? She also sounds like she is smart, and aware, enough to treasure the special times of your visits.

And while you are surely accumulating good points in heaven (there surely is a well worn phrase for this, but it is't coming to mind), it's got to be draining. Sending energy and love to you and your family.