That weekend we took it easy

We took it easier this weekend, limiting what we even tried to put on the agenda and making time to rest.

Part of me resting was sitting at the sewing machine recharging my batteries by working on this quilt.  It was in rows, and I sewed the rows together and added three of the four corners.  If there's time after blogging, I'll add that fourth corner this morning.  If not, another day then. 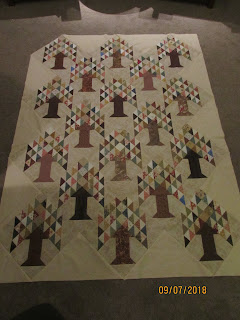 The receiving couple isn't getting married until December and I'm quilting a nice loose wind pattern on it like I did our leaf quilt a couple months ago, so I'm not in any danger of being late.  Yet.  But, I'm sure I'll get there.  I've been making half triangle squares as my leaders and enders on this so I will have another border for that quilt soon, I hope.

I also got the kitchenaid mixer put back together.  Notice the lower case letters.  That tells you that the noise is still there.  I've replaced all the moving parts except the gears and made sure the mixer makes the noise without the gears, so that means it must be a non-moving part touching a moving part.    I've ordered the most basic and easily replaceable part that it could be, the carbon rods.  The one part you're supposed to replace periodically.  Or course, I didn't start there.  If it turns out to be that, I'm going to say the same ugly word I said yesterday when I turned it on and that awful noise came out of it.

Here's a recipe that I made this weekend.  These are Linda's Grandmother's cookies and there was always a jar inside the back porch to steal from.  But, Linda tells the story better than I do. 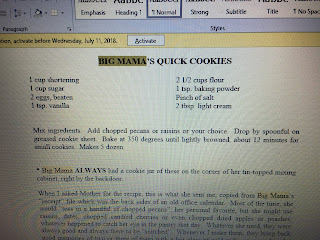 I want to try them with butter and throw in some pecans.  I think they'd make a wonderful pecan shortbread.  I made them with dried cranberries and they were delicious!

Linda's strength level goes up and down.  We bring in food, whatever she orders, one day chili con queso and another, cottage cheese and fruit.  Whatever experience she wants to enjoy again.  On Friday, she couldn't decide, so I took Chicken and Dumplings and baked cinnamon apples from one of our favorite country cooking restaurants.

We found out yesterday that the son said the family would do her laundry.  Only he isn't going up to visit, so nobody was doing her nightgowns and clothes.  So, we've taken that on.  Washing the blankets she brought from home as well...we might switch her to hospital blankets soon so we don't have to do that part anymore.  But, I don't think she's comfortable laying there half naked under just a thin white hospital sheet.

We found out this weekend they've upped her medication to include some morphine.  And, managing her pain means she has energy for other things, so I took up some crochet so she could make a pair of slippers.  It's an idea she got in her head that day we thought was her last and she remembers it (and not much else).  So, I printed instructions in really big font and found a hook and a skein and took them up.  No start yet, but I think she finds it comforting to have things she could do if she decided to, like books and crochet and History channel and music.

She doesn't remember that she's winding down.  And, I've gotten tired of reminding her.  Let her enjoy whatever there is in pretending.  She has noticed that her son has stopped visiting.  He says he visits in the night, when she's asleep.  Even if it's true, it's a way to make sure he doesn't have to visit.  So, we go every day and we visit as long as we can without giving up our entire lives.  We bring things like one of her mother's sherry glasses to sip some juice from and a real napkin from the hundreds that we accidentally took (what the hell will I do with all the napkins???).

We're enjoying spending more time with her.  Her other friends are too.  And, she's enjoying the company and the food and being taken care of a little bit.

Right now, everyone is happy and enjoying what is happening right now instead of dreading what may be coming tomorrow.  I'd like to say I'm going to adopt that for my whole life.

Have a great week!  Lane

I started reading your blog a few months ago ( subscribed using Feedly), and I wanted to let you know how much I enjoy reading it. You have a fresh, comfortable, honest voice. Than you for sharing.

What a good, loyal and dear friend you are to Linda. So thoughtful, too. I think I would want to have those kind of things (book, hand work, music, tv, etc) near by in case I felt like doing them. I was reading about things people respond to, especially as their other senses decline, and familiar smells were appreciated. I so wish I knew that when my father was in his last days. It might be the smell of a certain herb/flower, maybe the smell of a tomato plant, or the familiar smell of something at home, etc. I suppose at this point you could ask her what smells have been important/ comforting to her.
Thank you for sharing this journey with us, Lane. It gives us some inspiration when we are faced with a similar situation.

Lane, you made me feel good about today by your last lines. You’re so right......we just need to be reminded every now and again. You are an inspiration to all of us. Thank you! Mary