😕😕I'm feeling like Dory.  Just keep quilting, just keep quilting...
I'm still quilting the Christmas quilt.  I had to pull the quilt out of the machine and lay it on the floor to decide if I was okay with the scale of the quilting.  It's a little on the small size, but it didn't end up being distracting.  It's supposed to represent wind.  But, it's really more of a pointy meander.  It's a good fill, tho.  But it might be a bit strange around the flames in the candle block. 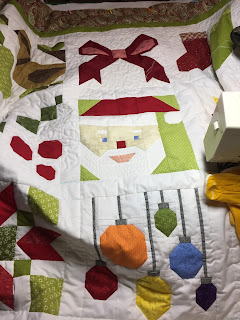 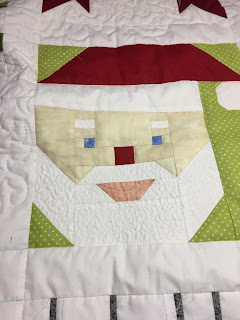 I wasn't sure whether I wanted that tightness in the hat, but I'm leaning more and more toward it.  Can you see the twinkle in Santa's right eye (left eye in the pic).  I'm going to do that in the ornament block, too, to give them a sparkle.  I tried that with invisible thread, thinking it would be shiny and perfect.  But, it wasn't.  I'm not quite sure I know why I don't like it, but I'll be picking it out.  The center got too shiny, I think.  Hopefully cotton thread will be better.

I've also been re-making more of the little vintage blocks from this post. 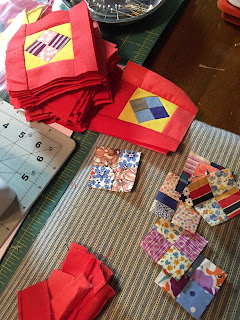 I'm up to 42 and have six more ready to go.  Then, I'll have to pick some more apart.  These are fun for me.  Very little thought.  Great chance to work on my leaders and enders as I work on 6 of these at a time, but I have to remember that the seam allowances are different.  My l/e project is quarter inch seams and this project is 1/8" seam.  Other than that, it's a good little "no-thinking" project.  And, I'm really enjoying the opportunity to study the fabrics in the centers.  More and more, I'm leaning toward 50's fabrics.  The prints are bright, but more refined than 30's prints and they're not big prints like 60's fabrics.  And, they're not the olive/tangerine/goldenrod of the 70's.  And, there's no polyester in the bunch so far, and with this much fabric variety, I'd expect to run into at least one poly if they were made in the 80's.  The quilter didn't really care what she put together as long as there were two lights and two darks.

All I can tell about the Whitman's Sampler box they came in is that it was printed before you needed a zip code to get your mail delivered.  I can remember when I was younger and they were really pushing people to use zip codes, but I don't know when they started being used.

Today is going to be one of those days at work.  I'm going to have to talk to an angry person.  Fortunately, I didn't do anything to make them angry.  But, they kind of blame me anyway.  I sent them a set of instructions because they needed to prove they were doing something right.  They did not follow even one of those instructions.  And, they created a situation where they were doing it right, messed it up, and now they have to start over and do it all again.  Weeks of work.

I have empathy for them.  I'd hate to have to re-do weeks of work.  (Okay, I should have said I hate it when I have to re-do weeks of work.)  But, 50 other people got these same instructions and nobody else made the situation worse, so I'm pretty sure I'm not actually to blame.  But, it's my job to calm them down and find a way to make it right.  That means working together.  So, all my soothing skills will be required.  Except I'm not all that soothing.

Everybody have a great Friday.  This weekend's project is to sort about a thousand bonus half square triangles by size and dark/light.  I've seen a project made from just HST's of different sizes and have an idea that I'd like to make one as a leader/ender project.  But first, I need to create some order among them.  It's the next stage of cleaning out the garage.

Many years ago, I ran with a crowd and we threw great parties.  I still have most of the stuff from those days.  We don't run with a crowd and we haven't thrown a party since I turned 40.  It's time to let that stuff go.  This weekend, I hope to let go of the inexpensive glassware and flatware I used.  But, it's hard to let go of something I've had since the late 80's.  Something I've pulled down and washed, dried and put back away twice a year since I moved into this house...without using a bit of it.

I just keep telling myself, imagine how much fabric I can store in that space.  Except I'm not really interested in that either.  But, I am looking forward to maybe a little less crowding in my kitchen cabinets.  It would be nice to be able to use something without having to move 8 other things to get to it.

Enjoy your project. I remember those colors. It used to be hard to find cottons and good colors after the electric blanket. I think quilting slowed down and with it finding suitable fabric. Now it's everywhere but costs the earth sometimes. Quilt on!

Re: stuff - Let it go - Set it free! I'd rather have empty space than be over-run with 'stuff' I never use. Good luck with the angry employee. Ugh.

Perhaps if you donate your stuff to a cause that you like, it will be easier to let go. I give my stuff to Goodwill so it will go to someone who needs it or the profits will go to help someone get a job. Makes it easier, even if I am just kidding myself!

Zip codes were begun in 1963 - I remember Mr. Zip and the whole campaign for zip codes too. Thanks for the memory.