One of life's boxes of chocolates

When I pulled that mystery UFO out of the box last week, I was looking for a project.  Mary asked how many UFOs I have and I realized, I didn't know.  I'd guess four or five Linus projects and looks like maybe 22 others, in various states of finish.  And, then there are four or five "re-makes" of vintage quilt tops.  The challenge around here is NOT to start something new.  And, when I want a UFO, I just reach in the closet and grab something that fits my current mood and I work on it til my mood changes.  That's my method.  My mentor can work on one project at a time and start it, focus totally on it until it is finished.  That's not a skill I developed.  I have a piecing machine and a quilting machine set up all the time and can have a treadle or a featherweight out in a jiffy.  And, I can have a different project on each, running concurrently.  While I'm not ashamed of being that way, it does sometimes mean I forget where a project is headed, which can be a really good thing because UFOs get created when I lose interest in where a project is headed.

But, back to the box of chocolates.  We go to a quilt show in New Braunfels TX and always tour the antique stores when we're there.  A few years ago, I stumbled up on this box with quilt pieces in it.  I think she wanted $25 for it, but when I offered her $10, she took it.  You'll see why. 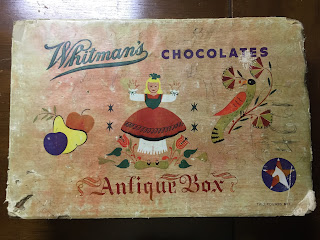 When I lifted the lid, I saw these. 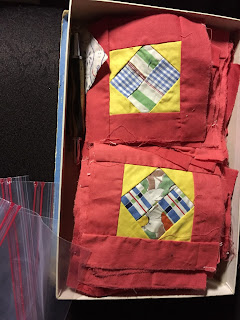 ﻿
And, inside the lid, there was the running total as the quilter made blocks.  108 was the final total, written very large.  But, there are other erased numbers, so I think this box must have held pieces for more than one quilt. 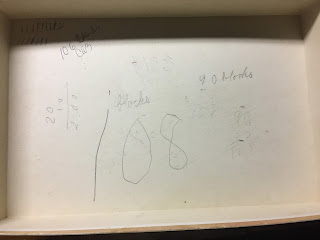 And, I got them home, and was so excited that I bought a very cute vintage reprint in a light green to go with these as alternating blocks.  Are you excited with me, yet?

The pattern pieces that she traced were in the box, along with pieces of some other quilt patterns.  Or, maybe they were pieces that would have eventually been added to these blocks.  But, they're traced on heavy paper and the edges are ruffled from being used and traced around. 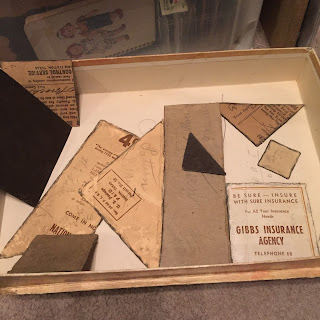 Then, the whole thing got put in a plastic box and put away with other UFOs.  When I pulled the blue UFO out last week, I found the chocolate box under it.  And, as I pieced and thought and quilted, I thought about these blocks.  I pulled the blocks out of the box. 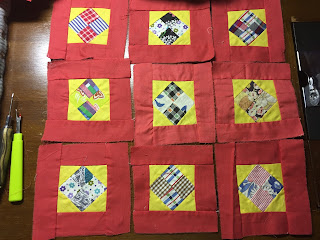 No two blocks are the same size.  The watermelon colored strips were torn from their fabric instead of cut and have a raveled edge all the way around and are a variety of widths.  Some of that fabric had been washed and is a lighter color.  Points were accidental because the yellow triangles are too small for the four patch blocks and those triangles were cut from every direction, without regard for bias.  Everything is pieced with a 1/8" seam allowance.

Oooooh, goody!  I love a good challenge.  So, I grabbed my good seam ripper and went after it.  It took a couple tries to figure out the right size.  They started at around 4 1/2".  After I get finished with them, they're 3 7/8".  I'm having to use the 1/8" seam allowance to put them back together.  That's a new challenge, remembering to do it more than sewing it, tho.  It was easier to get used to than I expected.

And, when they come out of the other end of the sweatshop, they look like this. 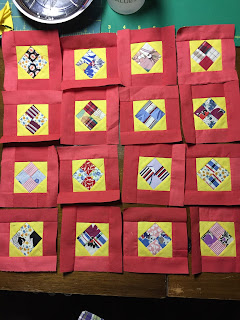 I need to write everything down with the measurements because I'm not sure whether I'll finish this in one go, or get bored with it again and set it aside.  The one good thing is that the tension on the original quilter's machine was off, and pulling it out is a breeze.  I trim the four patch and then add the yellow triangles and trim again, all in sizes that are based on eighths instead of quarters or halves.  Finally, I add two watermelon strips and trim and then two more and trim.  And, repeat, a half dozen blocks at a time so I can use them as my leaders and enders.

The mystery of my replies is solved.  Not everyone has an email linked to their google account.  Many are listed as noreply@blogger.  So, I will be trying to answer more questions here, on the blog.
Everybody have a great Monday.  It's another workweek and my email preview makes it look like its going to be a busy week ahead.  Yay...
Lane
Posted by Lane at 6:03 AM

WOW! What an incredible find. I wonder who started those blocks but I bet she'd be glad your finishing them. Have a great day. Mary

If you remember way back when, Mom tore many pieces for a quilt. Although she did not piece on machine, but by hand. Do you have any idea when this was started. What a find. lum