Well, that's one holiday down.  Two more to go, in rapid succession.  We even started Christmas shopping over the weekend, so there's no getting out of it now.

Swag-day is over for another year.  And, I survived it.  I should have a t-shirt made every year.  I don't know why we never tried to make hanging the swag easier in all those years I hung it before last year.  Before that, it was all "on the ladder" time.  And, by the time it was over, my legs and knees and hips ached and all I could do was sit.  Last year, we got the bright idea to tie long cords to it and tie those to the sofa, hanging it a few feet from the floor and I decorated it.  When I was done, we hoisted it to the ceiling.  And, it worked great.  When the holiday was over, we tied the cords to it again and lowered it and un-decorated it.

This year, we hung it from the ceiling using cords half as long.  That kept us from putting that kind of weight on a part of the sofa that was not intended to hold it in an upward direction. 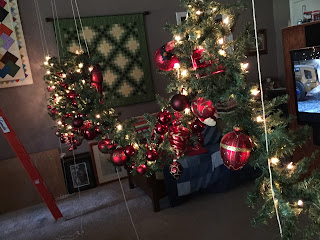 I spent a couple hours wiring red ornaments to it.  You can't just hang them on it.  They have to be wired on so they don't come down and konk somebody in the head.  One year, a red ball came off the garland, hit a ceiling fan blade and went flying across the living room like a softball.  Fortunately, it was some kind of metal and dented rather than break.  I saw that one just the other day when I was doing all this and remembered how that happened. 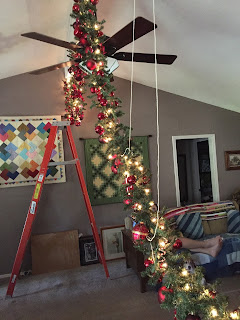 When all the ornaments are wired to it, it gets pulled up to the ceiling.  It's only difficult around the fan.  But, because they're all wired to the garland, only a couple dropped and nothing broken. 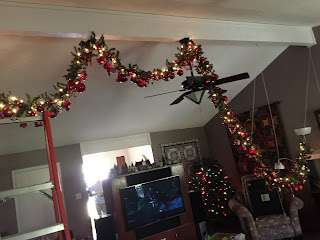 And, before you know it, it's all done.  I'll try to get a pic with the lights on.  That's when it really sings. 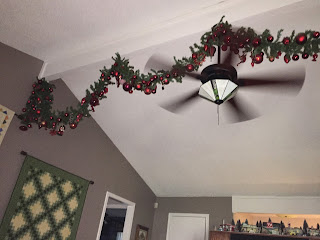 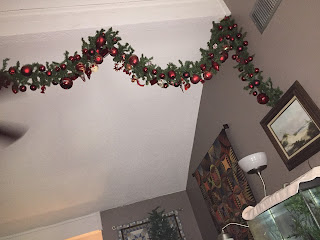 And, then I found six boxes of red ornaments that didn't get hung on it.

So, that is it for me today.  I made a bunch of 6" hst blocks and I'm down to one short border on the Christmas quilt, but those will have to wait for another day's post.

Sydney has had a Christmas tree in her room since she came to live with us.  One she can decorate the way she wants.  Peacocks, y'all.  Dark blue, purple, gold.  It's beautiful.  She's a very creative young woman.  I can't wait to see what she can do with that as part of her career.

And, no matter how much she don't want to admit it, I've been part of her getting to express that creativity.  I wasn't so good at encouraging it early on.  I thought she should conform.  Don't know why.  I don't conform.  But, I thought she should.  And, then I let that go.  We had bigger fish to fry.  And, now her creativity has matured.  And, like me, she's likely to try something and then if it doesn't work, re-do it.  And, she got part of Rob's planfulness that I don't have, so she doesn't make as many mistakes as I do.  Or maybe she's too smart to tell anybody.

Everybody have a great Monday!  It's off to work I go.  Thankfully, almost everybody has been off work, so there won't be much catching up to do.

The swag looks great. I can see why it takes so long to put up. Totally worth all the hard work in the end. Thanks for sharing. Mary

It is wonderful to read about Sydney reaching her potential using her life skills and supported by your and Rob's encouragement. All of us are on our own growing path and I suspect we could all use more encouragement.

Which makes me think of your blog. It is the first thing I read every morning and a big reason is your friendly encouragement -"Everybody have a great Monday!" Clearly, I'm late reading this one....