Everything in its place

Hahahahaha!  That'll never happen, but we did make good progress this weekend.  Rob painted the bedroom and moving everything out of it started a chain reaction that had an impact all over the house.  Well, maybe it was more moving things back into it that started the chain reaction.  Anyway, I decided I was going to get rid of some clutter, a noble goal at any time.  I was focused on the studio and my part of our bedroom.  I brought in a big box to put junk in.  Except the junk I found hardly filled any of that space.    What I found was a lot of stuff that was in the wrong place.  So, I filled my box and went to another room and put stuff away and gathered things that were in the wrong place and then went to another room and put stuff away and gathered more and did that until I took a small box back into the bedroom and put things away.  This is going to sound weird, but it was magnificent and fulfilling!

And, our red bedroom is blue. 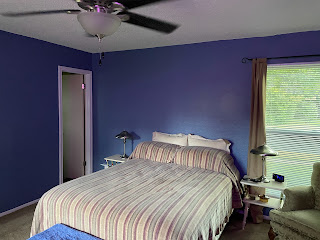 We bought the paint two years ago at the beginning of the pandemic when we thought we'd be home for weeks on end.  But, then Rob was made necessary and went back to work right away and we didn't get around to painting the room.  Now the pandemic is part of normal life he's sitting on a lot of PTO and decided to use some of it for this project.

I bought the house before Rob and I met and one of the first things I did was paint this room red.  My friends were shocked and said that was so unlike me, but I loved it and it had been this way for 22 years, but in that time, we'd had the foundation repaired so there were cracks in the sheetrock and torn tape and someone before us had caulked a gap at the ceiling with about an inch of caulk to cover where the wall and the ceiling didn't touch.  Rob fixed all of that.  And as his final dance, he replaced all the plugs and switches and their covers from beige to white. 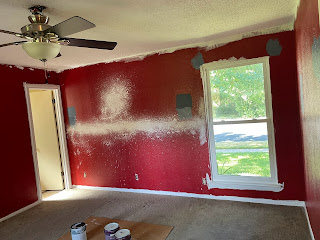 There are two more walls in the living room that need similar repair and this made him confident enough that I think he's going to try to tackle those.  That would be great!!  Thousands of dollars saved by diy.

Me, I mostly stayed out of the way and ran any errands and did any chores for him I could while he painted.  I offered to help paint, but he declined...when I help, I offer helpful suggestions.  I think he decided he could live without that.  😀

I did some sewing and managed to finish my shirt, except the buttons and buttonholes. 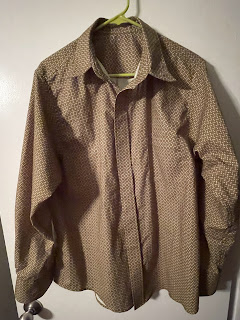 The extra fabric for Syd's shirt came last week and I got it laundered, but I didn't get the new yoke cut and didn't make any progress there.
We have a beautiful hawk in the neighborhood (along with a lot of owls).  It seems to really like my house and the drought seems to have brought it to my birdbath.  When it's in the yard, all the smaller birds go to roost and hide in the shrubbery.  And, about five minutes after it flies away, the yard fills up with birds and squirrels again. 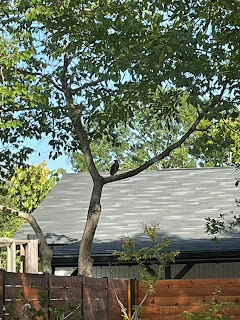 ----------------
I am disappointed in my country's ability to protect itself from the worst among us.  Who knew that it would be domestic terrorism, not foreign terrorism that would do the most harm.
And, our elected officials, chosen to protect us, have proven to be the most ineffective of all.

Everybody have a good week.  Find someone you love and give them a good hug.  And, instead of pushing that thing that belongs in the other room under the bed, pick it up and take it to its actual resting place.  You'll be glad you did.

My Piece of Earth said...

The blue looks so much better, to be honest the red needed to go.
I am surprised, I do not see a quilt anywhere.
Hope you are well.

I never have commented before, each Monday I look for your post first thing. Great choice for the blue bedroom!

The blue is awesome. Great choice of color. Thanks for sharing. Mary

I’m always curious about those strange speckled ceilings in some US homes. What is it and why isn’t it covered by gyprock or dry wall as I think you call it there? Heather from Oz and before that, various countries in Europe!