Okay, so somehow we went from being a quiet, stay at home couple that spent time puttering around the house to sports parents in three years. Who'd a' thunk that I would be cheering at a volleyball game?

And, boy, what newbies we were. We both left work early so we could make sure we were on time for the first game, only to find out that they charged admission and we didn't have even a quarter between us. So, we had to leave, and because it was an away game that was so far away from civilization that they have to bus in the sunshine, we had to drive forever to find an ATM. When we got there, the A team had finished their first game and were starting the second. Of course, because we were new, we didn't know why all the parents for our team were sitting on the side of the opposition and we originally ended up in the middle of the opposing cheering section, which we quickly moved out of.

The other team was from a more affluent part of town, and it was obvious that many of those girls had gone to volleyball camps and/or had been playing for a lot longer than the average girl in our team. Their A team trounced our A team. But, Sydney plays on the B team and their B team and ours were much more closely matched and the game was very exciting. They beat us in a tie breaker game by the two point lead required for a win.

Listen to me talk about the rules...haha! When we walked in, I didn't even know what a good play was, except that you needed to keep the ball off the floor and in bounds. But, by the time I left, I knew a bunch of rules. This is the B team warming up. That's mine in the center with white knee pads. 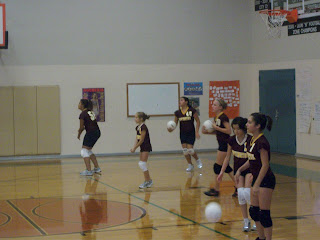 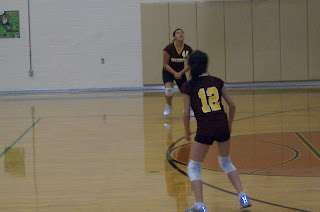 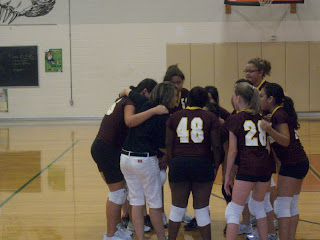 Now, you're wondering why I don't have any pics of my kid playing. Well, she played in the second game and of course, that was at the other end of the gym from us. She didn't play long. Said she was too nervous when the coach asked if she wanted back in the game. Okay, there's something to work on. She has a strong serve and until she got hit in the nose with the ball, her head was really in the game. After the whole nose thing, she was kind of distracted and avoided the ball. But, I wish the coach had made her get back in the game instead of asking. You know how that getting back on the horse thing goes. 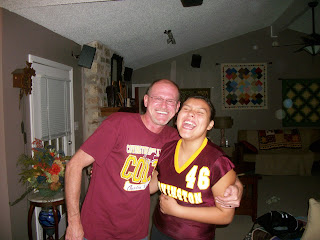 And, this was after we got home. You can see half of her cheering squad there. Now that he's seen her play, he has a whole coaching plan set up to work with her on. I think we'll be starting this weekend. That'll give him a new hobby. Unfortunately, I haven't gotten any custom made furniture in a while.
Oh, and 46 is not her regular number. Her jersey has a rip down one of the seams. She told the coach I can sew, so the coach asked if I could fix it. Well, yes, I can. It's a serged seam and I have a serger that I can repair it with. And, what stupid thing did I do? I offered to re-serge any others that tear this year. What a maroon! Sweaty girl shirts. Ewwwww! I draw the line at repairing spandex shorts, tho. No how, no way!
Have a great Friday. We're planning fun things to do and I think Rob wants to go to another city-wide garage sale, since I mentioned it the other day. Those are almost always fun.
See ya round the web. Or in the stands. Lane

Despite the fact you went from stay at home putter-er to sports mad parent I dont think you'd have it any other way.


Laughing at your "bus in sunshine" comment. You are truly hilarious.

tee-hee. Is it that obvious?

Oh, this post gave me a few chuckles.....draw the line at spandex shorts huh??? That was funny!!!

Did you not know that the first thing you need to learn as a parent is to say "Right now, I have a lot on my plate and have to decline" or if that fails....
remember...don't volunteer for a thing!!!! Once you do, you won't believe the things that will come your way....they smell the weak!! Trust me~

This was a fun post...made me remember when my daughter started playing VB...we had no clue ourselves..but learned quickly! You will really enjoy it...and yell and scream with the best of them!

Have a great weekend.....loved this, made me smile!

...and about the volunteer thing....I was joking....I did it, volunteered for everything...and looking back, those were the best of years when my kids were in school!! So....keep doing it!!......minus the spandex shorts of course!

Sounds like you have started on a fun, new adventure! Have a blast!

I always enjoyed when our kids played sports. None of them were great - except Kim as a runner both in high school and college, but it's a rite of passage and is very good for them on a lot of levels. I laughed about the rules thing. When Renae had her first swim meet I was thankful someone we knew was sitting near us, because I was clueless! We had done soccer, little league, figure skating, basketball, volleyball, but no swimming. You do learn, though.

First off, I love the photo of Rob and Sydney! It looks like they are having so much fun.

The Baby was involved in TaeKwonDo and Dance. I hated it when she would spar and get kicked. She got her nose broke and wore the bruises like a badge of honor! Hope Sydney doesn't break anything!

Good luck at the yard sales - hope you find some goodies.

I hate mending. I'd rather make a whole new shirt (lol).

It sounds like quite an adventure. Glad you're having fun!