This quilt meets those criteria and even though this photo looks pretty washed out, it's actually cuter than I thought it would be. It's all lime green and orange and lemony yellow. 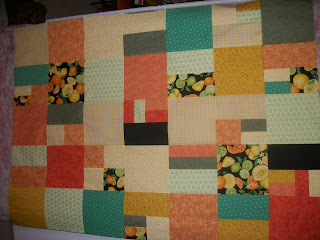 I started with this fat quarter that I knew I'd never use and I pulled fabrics that matched the colors in it, in as close as I could to the designer's proportions...except the black. A bit of black is plenty for a cheerful quilt. 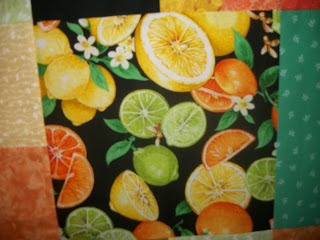 Just like that, I had whipped out a Linus quilt.

I pieced it the smaller pieces into 9.5" blocks the other day on the Singer 237 just to give her a try at the quarter inch seams. She did very nicely, but her normal foot is just under a quarter inch, so there were a few wonky blocks that had to be trimmed down.

Then, I pulled out the white (temperamental) featherweight and put it right away again and pulled out my good black featherweight. We all know what these beauties look like on the outside, so no picture here. They're just cute little darlings of a sewing machine and only weigh about 11 pounds. I used mine to make a shirt that will be featured in a post this week. And, as leaders/enders on the shirt, I assembled all the blocks into rows and after the shirt was finished, put all the rows together.

This weekend, I'll quilt it with something big and fun and some red/orange thread. And, that will be my June commitment. All finished.

This morning, I started putting a shirt together for Rob and I still have a quilt all spread out and waiting to be finished. I promise to work on it tomorrow morning. I promise, I promise, I promise. But, I'm just having so much fun making shirts, and Sydney picked out another pattern and fabric yesterday.

So far, since the first one she picked out, she's been able to pick out fabrics from the back wall of JoAnn's where everything is really cheap and then marked down by half. I got her the pattern, fabric, buttons and a spool of thread for about $12 yesterday. Can't beat that for a little cotton top with elastic sleeves and waist. Now, to find the time to make it.

Take care and have a great Monday. Lane
Posted by Lane at 10:33 AM

She did? How cool that Sydney wants you to make another shirt. :)

Quick and cheerful - you can't beat that! So exciting when our kids move into another phase, isn't it?

Love your linus quilt. Will you teach Sydney to sew shirts too?

Your linus quilt is cheerful, love it.
Sounds as if Sydney is doing great choosing fabric for her shirts. All you have to do now is teach her how to make them.
Patricia

BRAVO! I think it IS cheerful and fun.~ Oh, how fun to sew shirts! I want MORE TIME in a day!

Good for Sydney too!