Okay, so it's close to turquoise...

Remember that I took Sydney to do pottery a couple of weeks ago. Well, we picked our work up this week. She did the dolphin and I, the teapot. She's especially proud of the way she graded the water below the dolphin, starting with dark blue and then lightening the blues to the palest, almost white blue at the top. She's feeling so much better. Thanks to you all for your warm thoughts. Her fever has broken and the antibiotics are working and all is well.

The three pieces of fabric in the pic are bandana/kerchiefs. The lady that gave Rob the medicine that helped him quit smoking had some health problems that prompted her to quit smoking and now, she's losing her hair. She sent me a couple of pieces of fabric to make her some bandanas out of to tie around her head. I, of course, way underestimated the learning curve for something so simple and basically wasted one piece, so went to the fab store yesterday and picked up a couple others. I made her fabrics and mine into these...some of them a few times before I was happy. And, I have one more to take apart and try again. The secret was using paper for a stabilizer while I zigzagged the edges. 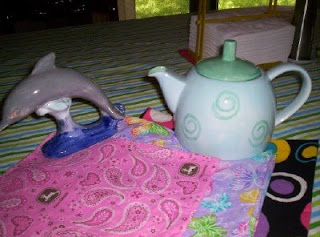 I worked on the orange peel all day yesterday. I needed a day to just unwind, so I spent most of it working on these large arcs that make up the outer border. The flat edge is the outside edge of the quilt. My mentor ended up ill so we rescheduled for next Saturday and I just sewed and sewed. I made 12 of these this weekend and had 4 already done. I think I might have one or two more in me. There are 20 total, so I can see the bottom of the stack of paper foundations and don't think I can stop. 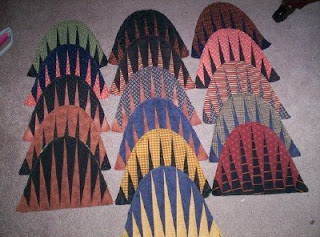 And, here is the quilt center after my binge of piecing last week. I think there are less than 40 of the 120 small arcs left to go and I'm starting to form circles from some of the colors. Most of the rest of the center of the quilt is muted colors, so this is the most of the excitement and brightness. I think I might just finish this thing...maybe. When I opened the pattern and saw all the pieces, I was not sure that I would ever get it done. And, once the foundation piecing is done, I get to start all that curved piecing to assemble it. 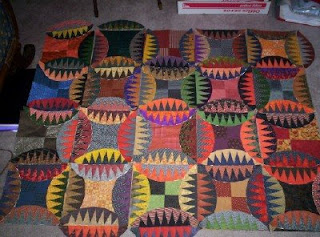 Okay, so now we're watching a show about a group of explorers retracing the route that Stanley took across Africa in pursuit of Livingstone. I think they argue more than they walk. 950 miles total and 20 arguments to the hour. I bet they'll be glad to be finished. At least as glad as me. But, Rob and Sydney are fascinated. I got really turned off when they killed the goat to eat. On TV. In my own sewing room. At least Rob warned me and I didn't watch.

Talk to you guys soon. Lane

Sydney DID do a great job on her painting! Love your teapot as well. Every time I see your updates on the orange peel I go ga-ga all over again. This is just going to be beautiful! Glad Sydney is doing better....I'm at the lake for a week and am going to have to go to Urgent Care tomorrow....I've got some kind of infection...ear, lymph glands, dizzy...probably the beginnings of a bout with sinus trouble.

Sydney's dolphin and your teapot look great, glad to hear that she is feeling better.
Your orange peel is looking beautiful, quite an undertaking. Look forward to more pics of your progress. Patricia

What beautiful guilts. I love all the vintage one best, but have several of both kind. A very enjoyable post.

Luv both of your potteries. Wow, you sure are making progress on your quilt. Glad Sydney is feeling better. Karen

Your tea pot is cute, but the dolphin is my fav ;-)

Absolutely beautiful, Lane! I love all the bright colors your using. I think you will have a competition quilt there when it's finished. Barb