Well, we did have a blast at Fiesta. But, not really any pics. We took Sydney's camera and it's a very inexpensive one and wasn't really usable. It doesn't have a view finder except the LCD screen, which I couldn't really see in the bright light. So, I have several pics of Sydney and Rob's chins, on the ferris wheel, walking through the park, and at the pool. And, there are a few pics of Sydney's legs as she went by on rides ;-(. But, the memories are just as precious. Turns out she doesn't like the fast and furious rides either. But, there was a whirligig which is swings that spin around and centrifugal force pushes the rider way out. She rode that one 4 times. And, there was only one ride she rode and didn't like. I had a blast and rode several rides with them since they weren't riding stuff I didn't like. But, the funniest moment was the Hustler, which is basically a tea cup ride, only based on pool balls. Sydney wanted to ride it, so Rob and I rode in a different ball than her and after making fun of me for riding the "teacup" ride, he almost got sick from all the spinning around. Hah! That'll teach him about making fun. We spent about 8 hours there making fun family memories and came home exhausted. If you get a chance to go to Six Flags Fiesta Texas, I recommend it. You can tell the toll that the economy has taken on it, in peeling paint and dust, but the rides are exceptionally well cared for. We went during the week because of my problems with crowds and that was a great choice. Almost no waiting in lines.

Then, yesterday, we went back to the pottery painting place to paint cups to go with my teapot I made a few weeks back. There were a few rules. Everyone had to use the same background color that I did, but each of us was supposed to decorate the cup with things that spoke about us. Rob used leaves and Sydney chinese characters for peace, love and energy, and I did quilt squares, of course. We'll get them back on Tuesday and I'll post pics here for all to see. After that, we went to a terrific new chinese buffet and then to see the new Harry Potter movie. Rob didn't enjoy the movie because he's lost track of the overall story, but I enjoyed it and think Sydney did too. She cried when one of the main characters died at the end.

Today Rob had to go back to work because his boss's family vacation begins, so Sydney and I are taking care of business, first to update her immunizations for school and then for some xrays for the orthodontist and then she gets to pick what we do this afternoon. I know she wants to go to an ice cream shop that's famous in the area, but she hasn't shared what she plans for the rest of the day. We'll be up north. Maybe I'll squeeze in a trip to one of the quilt shops up there.

I have two different quilt squares in progress, but nothing finished as of yet. Having no trouble starting things, but lots of trouble finishing them. I'll leave you with the one pic I got of their faces. You can see how much of them I didn't get in the picture, even though I thought I was aiming better. 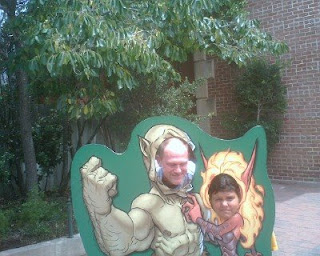 Y'all take care and we'll see ya round the net. I'm off to read your blogs and see what you've been up to. Lane
Posted by Lane at 7:06 AM

So glad you had a great day!!! Can't wait to see the teacups.....which will also serve as a humorous reminder of the "teacup" ride at the park!! Have a great day.

Glad you had a great day at Fiesta, I can understand why you were exhausted.
Look forward to seeing pics of the teacups.
Everyone deserves ice cream when they are on vacation, walking around quilt shops would certainly wear off the calories.
Have a great day doing what ever you choose to do this afternoon.
Patricia

Lane, you are a MUCH BETTER quilter than photographer :)

Glad you had fun, and I hope today provides some of those precious memories, too.

Sounds like a really fun day. I remember those swings.... they were my favorite ride too! Gosh, that must have been almost 50 years ago. I sound so old but I can remember how much fun it was like it was yesterday. Good for you making Rob sick after he made fun of you. The teacups are fun too.... especially at the age I am now... only don't spin them. *LOL* Can't wait to see your teacups. I love Chinese lettering too... Sydney's must be lovely.

Sounds like you had a wonderful vacation. I love Fiesta Texas, at least I like the rides there. I bet Rob learned a thing or two!! That was too funny. Have a great day and enjoy yourselves.