All’s quiet on the western front

Well, I’m in my third day without family.  So far, I haven’t gotten into any trouble.

Except that about an hour after they left, I dropped my glasses in the flowerbed and had to come in and get another pair before I could look for them and I didn’t find them til late in the afternoon and they were so dirty, I put them in my pocket to wash later.  Then, when I was putting away laundry, they fell out of my pocket while I was bent over and into the scrap basket.  I found them again yesterday, after I had retraced my steps from the whole afternoon in short bursts of remembrance.

Anyway, there’s been a lot of this.  Loving the new borders.  So much better for me than the stripes were.  Just a bit more movement now. 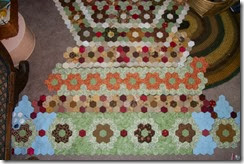 And, an obscene amount of this, even unto 1:30 am one night. 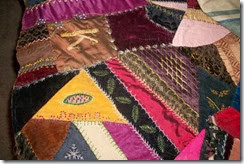 This is not a new project, it’s a restoration project, so it doesn’t count.  And, it’s a long term project…looooong term.  I’m covering shattered silks with new silks and adding embroidery that looks like it was never put in.  And, replacing some where the threads have rotted.  Basically, I could make a whole nother one in about the same amount of effort.  But, ohhh, this is beautiful and you’re only seeing about a 15” square.  The rest of it was in much better shape.  And, it has a history that one I made will never have.  I know I’m not the first restorer to work on it and there was an unexpected end to the previous request for restoration and I don’t think she ever got here.  That pink patch in the upper right corner?  Well, I found this morning that it’s leather.  First instinct, seam ripper!  But, the more I think about it, the more okay I am with it.  Except for a piece of velour I removed yesterday because I couldn’t get an embroidery needle through it, I’m only replacing what is shot, not what is still working.  But, there won’t be any embroidery in that pink patch, you can bet on that.

But, that quilt is going to take many posts to talk about.

I also did a ton of gardening and loving on dogs and cats and taking care of a friend’s cat.  And, eating good.  The only bad thing I had was a taco.  Other than that, it’s been vegetarian delight.  And, lots of jalapeno cornbread.  Oh, and a half pint of ice cream last night to wash down the huge salad I had for dinner.

Gotta make up for it somehow.

Everybody have a great Sunday.  The family returns sometime today.  I am finishing up the laundry and about to go grocery shopping.  Maybe they’ll get something celebratory for supper.

Nah, who am I kidding.  I’m sewing as long as I can.  And, every day they’ve been gone, that is until my hands hurt so bad they won’t hold the needle anymore.

Sounds like you got some restoration as well as the quilt this weekend! You'll be all ready for the fam to arrive!

Love the new borders, and I can see what you say about movement. The big, blue flower corners are a real brainwave!
I'm looking forward to updates on the crazy quilt. Leather? How funny! I wish we knew the stories of each bit! Feel free to speculate, and make up some stories for us!
Ugh, glasses.

I love all of those hexagons. Glad you have had lots of stitching time this week, too!