I’m back to Sydney’s coat.  And, I remember why I stepped away for a bit.  I am at a very boring part.  I’ve put the lining in the coat and now, I’m tacking and basting the layers together so I can start hemming and attach the hood. 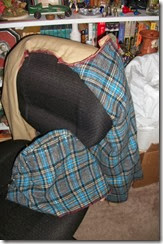 This is very different than the way I did my coat.  I underlined mine, which meant the layers of the coat were basted together and then the coat was assembled so that all layers were included in each seam.  In Sydney’s coat, I’m bagging in a lining (I think I’m using that term right).  Anyway, I made the shell and the lining as two separate garments and now I’ve inserted the lining garment into the shell garment, seam sides together so there are none exposed.

Next, I’ll baste them together along all the hems and along the collar.  The collar seam, where the hood joins the coat will be the only seam that has to be bound.  And, that’s just because it’s the easiest way to do it with the way that the front facings are sewn.  No need to redesign every aspect of the pattern, so I’m not trying to figure out another way to do the front facings.

I will say that assembling the hood in two pieces is much easier than it was to assemble as one piece that was six layers thick.  And, the points that were so hard through those six layers are a piece of cake when there are just two.

Sydney and Rob are going to the coast this weekend to spread a friend’s ashes.  I’m staying home and “dog sitting”.  For a week, I’ve been thinking about all the fun sewing stuff I’d do with three days alone.  Except this morning, I remembered that the laundry will still have to be done and the lawn will need to be mowed and I’ll still have to do the shopping.  But, I’ll carve out some time for me.  I want to do some gardening if the soil is dry enough.  If we don’t get more rain, it should be perfect…dry enough not to be soggy, but wet enough not to be rock hard and crumbly.  That’s perfect for keeping soil on the roots to move some things around.  Remember that I widened my flowerbed in the spring, but it was too late to move the short plants from what used to be the front, to what is the new front.  So, I spent this year with a height problem of the shortest stuff in the middle of the bed.

I took this picture this morning.  I waited and waited for the clouds to break and the sun to shine before I took it.  But, that is clearly not going to happen on this day that is so humid that the walls are starting to sweat. 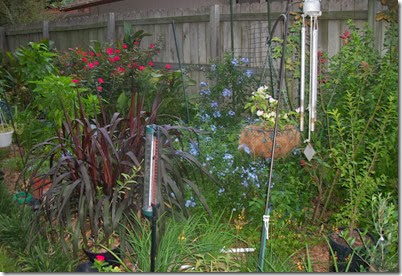 Just wanted to show the reds and blues and purples.  This is the final season of my garden and I’ve let things overgrow to fill in the spots abandoned by cooler weather plants that have gone to ground or given up the ghost.  Just so lush and overgrown and appealing.  There’s something about an overgrown and crumbling garden that appeals to me so much.  I think it’s from growing up in the south when you could still drive by and see the old mansions, crumbling, with their gardens overgrown and untended.  Then, old people moved on and new people came in to those houses and fixed them up and I don’t know where I’d go to see an old crumbly, overgrown but once well tended and loved garden again.  So, I reproduce it by building out of crumbling materials and rocks that shift as they settle into the dirt so that my paths aren’t straight or level, and lots of temporary structure to support the growth and overfill.  All I have to do in the hottest months of summer is keep one plant from overcrowding it’s neighbor and killing it.  And, the plumbago in this picture would do exactly that if I would let it.  I dug out 8 babies last year and will have at least another 4 to take out this year when the first freeze kills it back in January and I can see the roots.  That doesn’t count the thousand seedlings I’ve pulled and tossed away.

It likes me.  It really, really likes me.

Everybody have a great hump day.  Friday, I can sign up for my first guild class; a thread painting class being offered next year.  I intend to get my application in the mail so it is postmarked on Friday, the first day that registration is open.

It is going to be a great week. I just love those colors in the garden.

I don't think I've ever seen a garden like you describe-- I grew up in California. If you don't water, everything dies.

I do love your fall garden color. I hope your weekend is productive.

First off I love the Sally Field reference --- will she ever live that down? Back in the day I lived in coastal Georgia and we would take a boat over to Cumberland Island. My best memories are of the old decaying mansions being slowly absorbed by the overgrown (formerly fabulous) gardens. There is something so beautiful, so captivating, about a garden like that.

Wow! I love your garden. It is beautiful! The color and texture is amazing.