More about the quilt show

Rob has uploaded the videos from the quilt show.  There’s a short version and a long version.  He has created a space within his “channel” for quilt shows.  This is a link to the page.  You can select which version you want to watch or scroll down to see other show videos and vacation videos and lots of me sewing videos.

The show’s boutique was quite crowded, both times I went through, so I didn’t feel like I got a real opportunity to touch everything.  That may have led to more spending, so it might actually be for the best.

Anyway, one of the things I bought was another person’s UFO. 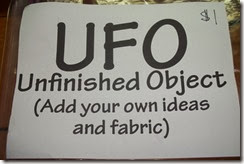 2.9 oz of fabric, for a buck.  Can’t hardly beat it.  And, clearly I can’t resist working on other people’s UFO’s even when the ones in my own closet call out to me.  There were bunches of these bags, priced at $1 or $2 by weight.  Inside was something leftover from another quilter.  The bin of these was crowded and I really would have had to reach between people, potentially touching them inappropriately to get my hand in it and then would have had to withdraw either a handful of baggies to sort through…or a nub, you know how quilters are about a bargain.

But, on the back of the boutique, where the more expensive stuff was and it was less crowded, I found this lone, abandoned UFO bag and it had a great green 9 patch visible, so I grabbed it.

I was so inspired by the quilt show that I couldn’t go back in the sewing room and work on Syd’s coat, so I took all that apart, every stitch, and ironed it and recut it.  I cut all the pieces from the Irish Chain down to 2 1/4” squares and I started laying things out.  And, this is what I came up with. 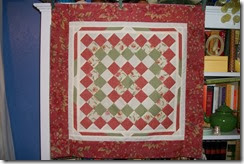 I had to add a bit of off-white, but fortunately, I had some in my stash that was almost identical.  The narrow border is made of leftover squares that I cut in half and then joined on a diagonal, to create a chevron appearance.  The outer border came from stash.  Don’t know where I ever would have used that piece of tomato soup red with tan flowers on it.  Now, at least a quarter yard of it has found a home.

I really needed something quick and quilty.  And, that fit the bill perfectly.  The whole thing, including the disassembly, took about 5 hours; a couple on Saturday afternoon and by time to go to the grocery on Sunday, the rest was put together.

I didn’t get the job.  She called yesterday.  We finally found out that she had a more qualified candidate, but that took a while to get out of her and she would only say it to my boss, and then, only when he told her to cut to the chase, he had a meeting to go to.

She was very busy trying to make sure I got something out of the interview process.  So, she wanted to give me feedback.  Her feedback was that my answers were so complete that the interviewers didn’t feel that they had an opportunity to build up a rapport with me.  I didn’t leave them with questions to ask that would have built rapport and subsequently, my interviews were over in less than an hour…she didn’t care for that.  Because I would be a remote employee, the interview team felt it was most important that I be able to build quick rapport.  Even though my answers were supposedly spot on and I thought of things that no one else in the process thought of.  Unfortunately, building rapport is not my strong suit.

If you ask me, the thing I did best in this interview, that has given me trouble in the past, was being clear, concise and making sure the interviewer could tick off the parts of the answer they needed to complete their responsibility with as little dragging it on as possible.

So, if the thing I liked best about my performance is the thing she liked least (and the only thing she cited as a reason for not hiring me) then that says that I was not the right fit for the job.  As Rob says, we dodged a bullet.

Actually, Rob and I have laughed and laughed because nobody has ever accused me of being concise or not rambling.  EVER!  I don’t generally know the meaning of the phrase “long story short”.

Anyway, it is over.  The suspense is done.  And, I got some practice interviewing.  It’s been a decade since I interviewed for anything.  Everybody should do it more often than that, just to keep in practice.  And, with all the good feedback that I pulled out of her long winded explanation, I’m feeling inspired to see if there’s anything else out there I might be interested in.

And BTW, if I’m ever interviewing you, be concise and to the point.  I really like that as an interviewer.  If I have questions, I’ll ask.  And, the interviewee is always the one in the hot spot.  I was taught that it was my responsibility to make them comfortable and to build rapport.

Be well.  Have a great Tuesday.  All those yucky projects I delayed, hoping I’d get a new job before they had to be done are calling my name at the office.

Your repurposed quilt top is really pretty-- and you did it really quickly.

Sorry about the job-- though, based on their process and how they handled the whole thing, I think you're better off looking elsewhere. If a person's answers are very concise, then the interviewer needs to come up with some other way to build rappor. Yikes.

Hi Lane, Sorry the job fell through but I think Rob is correct in saying you dodged a bullet. I've been both the interviewer and the interviewee, and my philosophy is make your answers short, sweet, complete, to the point and honest! Seems to me this is THEIR loss....not yours.

Yes, it is good to dodge bullets ... even those you didn't know in advance could be lethal! Now you know (again) that you can live through a long and difficult interview process and come out stronger. When another opening appeals, you can go for it. And we all want to know when that happens! Thank you for letting us in on this portion of your life. The quilting part is way more fun, and the Sydney parts are way more poignant, but we have to afford those parts somehow.

One of the joys of being retired is not having to be interviewed for jobs anymore. I fear those other kinds of interviews in my future, though, like extended care facilities and medical providers. Life is full of change. You seem like you handle it well.

Interesting feedback on the job. It sounds to me as if she either wasn't prepared to be honest about her reasons or she simply didn't know why she didn't 'like' you so she kind of rambled on filling up the silence with meaningless drivel by way of feedback. So much for all that structure and process used by your employing organisation on this recruitment exercise - in the end, it seems as though they may have overlooked some of the most important aspects of it all: training the hiring manager in how to understand their requirements, conduct an interview and provide feedback!

Wow! The UFO rescue turned out beautifully! That fabric you used in the border is just perfect! Love the colors and the layout!

Sorry about the job. And the whole interview process and the lame reason why they didn't hire you. As you said, maybe you dodged a bullet and there is something else out there that you'd like even more.