Normally, I won’t go back and fix points.  I do my best and what happens, happens.  But, this little quilt just would not give me any rest until I did something. 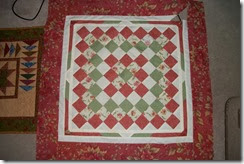 All four corners of the first border were wonky.  It was a pieced border and I made some mistakes.  And, it made me nuts.  I hung it on the wall, thinking that I’d get used to it if I saw it long enough, but I didn’t.  So, I peeled back the borders and laid a square over the corners and sewed it diagonally, folded it back and trimmed the excess away and now I’m putting the borders back in place.

This is the last corner to finish.  And, no I did not take a picture of the offending corner sections before I fixed them.  There is no need to record that, it’s only important that they are better now. 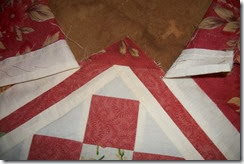 You’ll have to excuse my filthy ironing surface.  It’s time for a new cover, but it’s a pain and I’ve been putting it off for after the first of the year.  For a couple of years.  Maybe more.

Anyway, when this corner is finished, It will be ready to quilt.  I’m feeling pretty good about this quilting without a foot thing and may be ready to try that on the two spool machine, which is currently in my Mom’s sewing cabinet because it has a shelf instead of hanging by the hinges.  This National machine has hinge pins in a different place than my Singer machines.  This machine is griest and there really isn’t a griest hopping darning foot that I can find.  One lady made one out of a paperclip and I’ve imitated that and will try it.  And, I have this spring thing that you’re supposed to mount around the needle, but I’m not sure I have much faith in that. 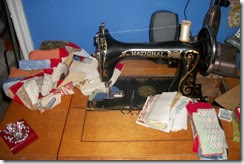 It has my Bonnie Hunter Texas Braid quilt on it right now.  That’s sort of a perpetual project.  Bonnie called for thousands of pieces and I cut about half and started.  But, it’s taking forever.  For some reason, this one is boring to piece.  It’s just the same thing, repeat, repeat, repeat, repeat, oops, I messed up, remove, repeat, repeat.  But, I will finish all the pieces I have cut.  One day.

Anyway, I keep it as a “go-to” project that I can pick up and work on at any time.  And, put down whenever I want.

Finally, there’s this crazy quilt pillow that I want to share. 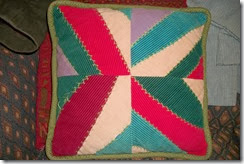 I found this on a roadtrip to Louisiana and handed it to Sydney and told her to give it to me for Christmas.  It’s all corduroy fabrics, even the green back, which matches the piping.  It’s a real cute little bit of oddness that only cost $5 and brings me joy.  And, I can repair the bit of broken embroidery thread in the lower left quad.

Everybody have a great Friday.  Tomorrow is my thread painting class.  She called for a variety of different shades of thread in a few colors.  I thought this was excessive, but I know that some people will bring whole bins of thread, so I’m not feeling too much about this little box.  Everything is packed in a basket, ready to load in the car.  Just have to put my machine in her case and go. 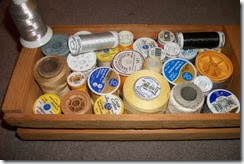 What thread did I have to buy?  black polyester.  That’s the only one.  It’s like the most common thread in the world and I had a half a bobbin full.  In February, I’m taking a color class with Joen Wolfrom.  She says to bring as much fabric as you feel comfortable carrying.  I’m thinking of taking my scrap users bin.  That will give me more variety than there is in my stash right now and it’s easy to pick up and carry.  There’s no sewing in the class.  I don’t want to haul bins of yardage around.  Has anybody taken a color class where you were asked to bring lots of fabric?  Would a drawer full of squares have worked as well as your yardage?

Your new corners look good. I would think it's part of the piecing.

I have Joen Wolfrom's Color Magic-- I bought it in the late 80's. I read it, committed parts to memory, then went to the quilt store to pull fabrics for an opalescent quilt. I had about 12 fabric bolts stacked, and was taking some off and adding others, when I turned to see about nine women standing behind me, watching. One said, "How are you doing that?" about the color interplay. Joen rocks!!! She made another nine sales that day.

I'd take the scrap bin, and maybe a neutral or two.

Oh, no... Just when I'm trying to get up the courage to figure out how to add some pieced borders to my Jingle BOM, you're posting about how your pieced borders gave you trouble. :-( You have way more quilting experience than I do -- Should I just not even go there? It looks like your "fix" was successful, though.

And more scary quilting -- without a FOOT?! "Quilting Without a Foot" sounds kind of like a horror movie to me. Whether you'll be quilting sans presser foot or sans flesh-and-bone feet, I can't decide which is more terrifying. ;-) But I'll be curious to see how you manage that, so please do post about it.

Have fun in your class, and Happy New Year, Lane!

Have fun at your thread painting class!

Looking forward to hearing about your class.

Oh how I could and would love a color class. Do you know if the class is full? I love that pillow too, very charming and a great buy. Hope you loved your thread painting class. Are all of these classes through your guild? I might should look into that this year....just doesn't seem like my thing. Have a great Sunday.