I can get so much done!

This isn’t the order I did stuff, but I don’t want a garage picture to be what everyone sees first thing this morning.  With the baby quilt finished and not being ready to start the silk quilt, I set my sights on the garage and when I was so tired I couldn’t move, I came in and sewed red/white/blue blocks for the bee.  More about that later.

Before I was going to use the Hobbs wool batting in my silk quilt, I needed to know how it was going to act, so I planned a small practice piece.  I traced one of my photos onto a piece of red poly that was thin and had the feel of my silk.  And, I sandwiched a piece of batting that I cut off the corner.  And, I gave that batting a workout. 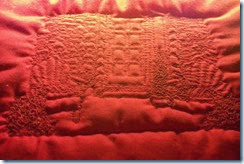 It worked out so good, I squared the pattern up and I think I’m going to put it in a little frame. 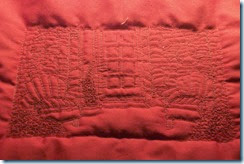 It’s very hard to photograph.  I really need a camera that will photograph red better.

Anyway, the batting did wonderfully, so I was ready to move to the next step.  I pin basted the silk.  I guess I just need a new camera because that silk is brown. 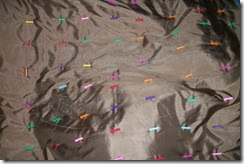 But, I still haven’t put a thread into it.  Kinda nervous.  What if it doesn’t turn out like the vision in my head.  The practice piece was close, but not exactly as precise as I had envisioned.  Thread is not as precise as pencil for me.  So, I’m trying to release that vision and let the quilt be what it will be.  But, first, I have to put a stitch into it.  Maybe tomorrow.

Next weekend is the class with Sally Collins.  I couldn’t help pulling another set of fabrics for it.  That makes four.  Yes, I have enough fabric sets pulled to make 4 pincushions.  Hopefully, something she says in the beginning of the class will help me pick.  Here is the latest.  Ohhh, they’re yummy in real life. Even if they don’t turn into a pincushion, they might stay together to be a quilt. 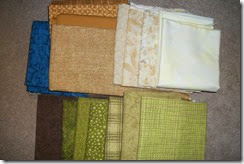 Okay, so back to the garage.  I dis-assembled the furniture pile and put it back in a different order so that I could use some of the furniture that was piled.  And, I threw away several bags of garbage and made a tall pile for goodwill.

Now, I have a work station where I can work on machines or build things for the dollhouse, without taking the sewing room out of commission.  Who knows, maybe one day, Rob and I will both be working together in the garage.  That would be nice. 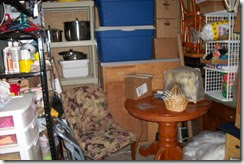 I heard a lady at work say that she had weeded for two hours before she got through.

What I wanna know is how she measures through.  I weed every day and I’m never through.

Gorgeous work, as usual! I think it should be framed! Great blog post!

I weed every day and I’m never through.

Ain't that the truth!

You sound like me...holding off starting the quilting. But your quilting is so much better than mine!!! Go for it...

Do you have any scraps of your brown silk to practice on before you put the first stitches in? I think the rayon sample looks terrific, and it really ought to be similar.

The garage looks nice and neat, too. All ship-shape and Bristol-fashion.

Your silky trial run looks fantastic! I know what you mean, though, about needing to let go of the vision in your mind before you start in on the real quilt. Because a quilted line IS different from a penciled line, the quilting will draw you in and take on its own direction, and it's hard to be open to that when you're feeling anxious about how it looks different from your sketches. But it's going to be amazing, and it's going to be FUN, so go for it! :-)

Maybe she meant through for the day, too?

About your photos, indirect sunlight is best. It sill show your colors truer and you'll get less distortion from the flash. Find a spot on the south side of your house when it is nice & sunny outside, but the light doesn't shine directly onto what you are photographing. It might help.

Also, I would love it if you uploaded your photos a little larger (or through blogger at full size and then used that to resize the photo to fit your blog; it seems like you said you used another way to type out your posts & then insert them to blogger?) so that I can see more detail. You do great work! Show it off :) .