I've been in Texas for 25 years. There are some foods that just stick out in my mind as traditionally Texan. One is Chicken Fried Steak with mashed red potatoes that include the skins and milk gravy spread all over it. This is otherwise known as "stroke on a plate".

The other traditional Texas food that seems centralized to Austin and San Antonio is Migas! (yes, I have to put an exclamation point after the word every time; it's a texas thing).

And, if I'm reminiscing, then it must be Way Back Wednesday.

I remember the first time someone talked me into trying Migas. I was at the Magnolia Cafe (known locally as The Mag) on South Congress Avenue. Magnolia Cafe is an icon where the hippies used to eat until the yuppies found it in the 90's. Now, you can go at odd hours and get a table, but if you're within a couple of hours of a traditional meal time or between 2am and dawn on Saturday night, you're gonna wait for a table. Sometimes for hours.

But, when I started going there, you could get in most anytime except Sunday breakfast. And, they made the best Migas! I tried them one day as an alternative to a heavy lunch. A friend recommended them and I was skeptical. We were there for lunch and I didn't think anybody ate eggs for lunch unless they were ill. You could have eggs for breakfast and you could have eggs for Sunday supper, but that was about the only times there was no meat on the plate. How silly those old "traditions" I used to live by were.

At the Mag, you got your choice of home fries, fruit, or toast with your Migas! (annoyed by the exclamation mark yet?) Home fries and Migas! are a perfect combination. Throw in some refried beans and an extra tortilla and you've got a traditional Tex-Mex meal.

I've tried Migas! at many of the local restaurants in Austin and San Antonio. I've had them made with crispy fried toritlla chips instead of corn tortillas. I've had them with onions and jalapenos and hot Salsa (that feels like you've eaten the sun!) I've had them folded in tortillas to eat like breakfast tacos. I love Migas!

A few years ago, I came up with my own favorite recipe and lately, the kid and I have been having Migas for breakfast every morning. She makes breakfast while I get my lunch together and we sit at the table every day. I know that won't last much longer, but it is nice (even when I'm so mad at her I want to shove plate and all...uhh...down her throat.) Today, while I was packing lunch, I took pictures of her making breakfast.

We started with 3 corn tortillas, 1 tablespoon of olive oil, 4 scrambled eggs with salt and pepper, 2 tablespoons of salsa and a small handful of grated cheddar. The only thing bad is the cheddar, but hey, you can't make a meal without at least one thing that's bad for you, can you? Corn tortillas are low fat and don't have the white flour that gives me troubles. Salsa is all vegetables and doesn't have to contain preservatives if you're up to making yours fresh (I use the jar, but that's about having limited time in the morning). 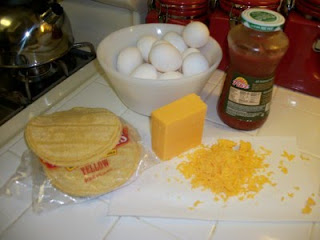 First, she tossed the tortilla strips in the olive oil (yes, she can toss them and flip them without a spoon. I taught her that.) 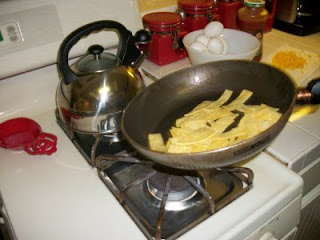 When the tortillas are crispy, push them to the side and add the scrambled eggs. 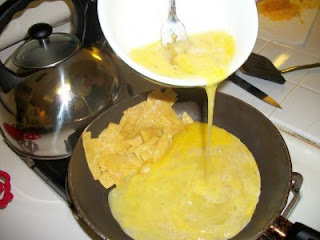 When the eggs are done, add the salsa and the cheese and stir it all together. 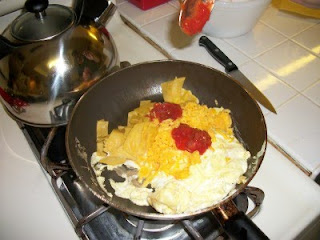 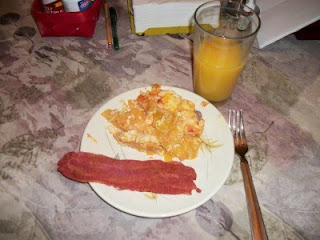 They look just like the first Migas(!) I had when I came to Texas. Reminds me of lunch at The Mag with friends that have since moved away. Back in the days before kid.
Lane

Mmmm...that looks good. I've never tried them before, but the recipe is pretty straight forward and my husband would love this (he's from Houston.) Too bad that I have to lower the heat of the salsa if I'm sharing it; I have gringo lips and even mild is pretty spicy.

This looks great.....my friend. I sent you an email...I know of a few very sneeky friends who live in Austin....who love to surprise folks....and make them cry!!! I am still wiping my eyes a bit!!!

Lane, I spent many years in El Paso, Dallas and New Mexico and I have to say that I never heard of Migas! They sound (and look) really good though. I am not an egg eater but the other two are, so I will have to make this for them one day. My favorite Breakfast food (Do you call it breakfast when it is consumed after 2 a.m. when the bars close?) is Menudo. I am sure that you have heard of it. I visited my Mother a year ago and had it every day. We can't find it here - too many gringos! Glad that you and your daughter are enjoying breakfast together. These are the types of things she will always remember.

It looks like it is bad for you and yet it isnt...interesting. I wonder if I can get Mr. P to eat this believing it's bad when actually it's better than the bad stuff he eats ...hmnnnnnn. And do American's always eat such varied breakfasts? We do toast and vegemite or cereal here (if we're lucky)

i would have some major acid attack after this lot!!!!

They look good Lane. Believe it or not I'd never heard of them.