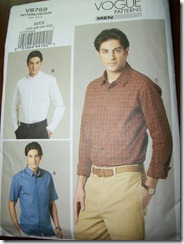 If you read my post last week, then you know I was drawn to this Vogue pattern by the pattern details in the back and in the sleeves. 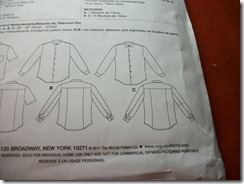 View C has the back split into three pieces and the sleeves have a seam that runs from shoulder to wrist at the placket in addition to the underarm seam.

I had three problems with the pattern.

First, the two back side panels were longer than the center panel.  A more experienced sewist would have known to take that extra out at the hem, not at the yoke.  I planned it for the yoke edge and after I put it together, but just before I whacked off the extra, I realized that was going to change how the sleeve fit, so I had to take it all apart and try again.

Third, the instructions for handling the sleeve plackets were not clear to me.  Maybe someone that makes more garments and follows more garment patterns would have done better, but I was very confused.  I winged it and ended up with the plackets looking slightly different.  Not noticeable and I haven’t pointed it out to anyone yet. 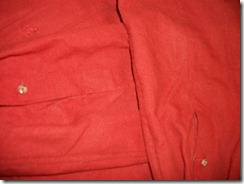 So, how about the actual shirt?

I won’t use linen again.  It’s wonderful, but it’s thick and warm and scratchy.  Also, it’s a very tailored shirt.  Had I gone to the effort and made a muslin, the arm holes would have been larger and a little extra added to the sleeves, just for a bit more wearing ease. 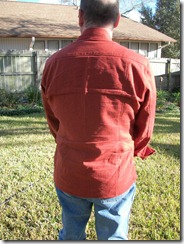 See how it pulls to the underarms in the back?  A little more ease would be nice there.

The back is slimming and I could have used an extra inch and a half, spread across the side and back seams.  While I do have the v shaped back that this shirt pattern fits best, my extra weight hangs out in the front and adding to the back would have made the front a bit more comfy, especially after a big birthday dinner. 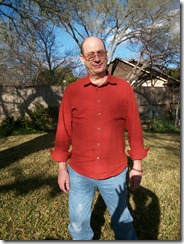 Even so, it’s not too stretched across my middle and is more comfortable untucked.  If I make it again, the bottom of the pocket would be a bit flatter and less V shaped.

Also, I think the cuffs are too wide and I don’t care for the square points, but those would both have been easy to fix with a muslin. 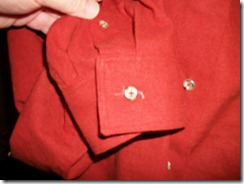 So, how did I make the pattern my own?

The instructions would have had me leave the shoulder seam and the sleeve seam for the placket unfinished.  I don’t do that.  Sure, they’d have had me sew them down and trim them close to the top stitching, but that’s not enough for me, so I flat felled them both.  I also added a front buttonhole placket by turning my fabric to the outside instead of the inside and top stitching a quarter inch in on both sides.  I like a shirt with a placket and was lucky that my fabric is the same color on both sides so I could add one easily.

I like a shirt to give me a good daytime and night time look, so I like the top button on the front to be 1 1/2 inches from the collar button, and then the buttons can be 3 inches apart.  That way, with the top button unbuttoned, we’re not down to my sternum. 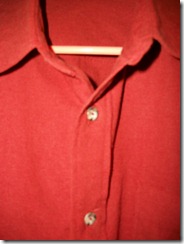 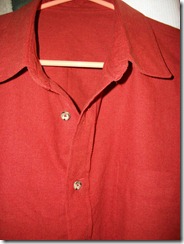 Anyway, the only other thing I did was to make the bottom buttonhole a horizontal buttonhole instead of a vertical.  That’s the button that hits us just below the waist and the stress is definitely horizontal on that one.

Okay, everybody have a great day.  Sydney brought home a bug and gave it to me and so I am home today.  It’s not enough to put me down, but it does include a low grade fever and my peeps would never forgive me if I passed it along.

It’s Tuesday.  The sun is shining.  I wish I was outside.  But, I will focus.

Well I gotta tell you about your shirt Lane. BQ (Before Quilting) I used to make all my own suits for work. My mother taught me to tailor and I had no fear, and the results were usually pretty fantastic. As is your shirt. I do love your attitude of just jumping right in, fearing nothing. I love that you make a muslin (sometimes) and that you're more than comfortable with ripping and re-stitching and fitting and re-fitting. And that you can alter a garment - you only know how hard that really is if you've done it! You're a pro!

Good call on the locations of the buttons. In a way, the linen shirt is your muslin for the butternut fabric-- with the added bonus that the shirt is attractive and wearable.

Welcome to Vogue patterns--the most complicated and the worst instructions of the big 4...

I agree with other poster....Vogue patterns. But they do have the nice additions like the back detail. I think it looks great, but you know how it feels to be wearing it. If you make another one it will all be ok! Hope you feel better soon!

Good thing you KNOW how a shirt should be. I barely sew with patterns anymore, but I used to make clothing often...I'd rather quilt.

Lane, that shirt is very becoming on you. You did a beautiful job. I used to make clothes all the time, and it is surprising how long it takes. That you finished the shirt in a day and some change is a pretty big accomplishment. Nicely done.