Well, the best laid plans to go to Quiltcon didn’t work out.  The closest I got was this blog post.  I planned to go on Saturday.  But, that plan got lost in this. 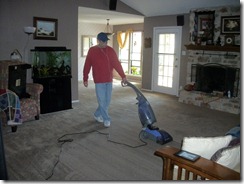 Cleaning carpets.  We’re having a houseguest at the end of the month and with Syd’s surgery coming up, this was the only chance.  So, we bit the bullet and moved out and cleaned.

I planned to go on Sunday, but that got lost to cooking and putting the house back together.  Life just gets in the way sometimes and you have to choose and Quiltcon didn’t make it.  Basically, I could take four hours and go look at someone else’s quilts, or I could spend those four hours working on my own.

Early in the mornings and late in the evenings I got the ditch work in this quilt and got started on the blocks. 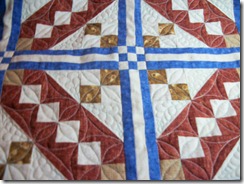 Above are the four center blocks. 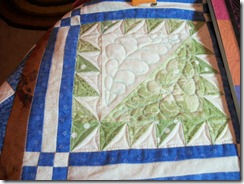 And, here is one of the identical corner blocks. 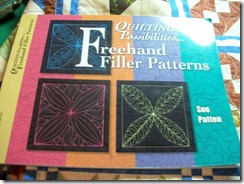 Sue takes lots of common blocks and gives several ideas for how they can be quilted.  I’m not exactly duplicating her work, mostly because these blocks are so small and would be overwhelmed by it, but I am taking part of what she did and adding a bit to it.

A big chunk of Saturday was spent shopping for Sydney.  She needed loose shorts and a nightgown in case one of the dads has to help her off the toilet.  A nightgown can fall around her, giving her adequate time to pull things up after she’s standing and we’ve left the room.

And, lots of other stuff.  Tomorrow, I’ll talk about how cooking so right went so terribly wrong.

Have a great Monday.  Lane

What a lovely gig lounge you have Lane, I can see you laying blocks out all over the floor.
That's a challenge for me in my little English house :-) especially with 2 dogs hell-bent on laying all over them.

I'm having similar weekends. I did finish my i-spy quilts in time for Easter, and I put together some paper-pieced jacob's ladder blocks into a little quilt from which I now need to remove the paper.

Good call on thinking about Syd's privacy early with the shorts/nightgown/etc. Very thoughtful.

I love how you quilted that corner block, Lane! I hope someday my feathers will look pretty like yours. Right now my feathers look like a grotesque bouquet of TONGUES! :-(

I hope you enjoy your house guests, and still find time to quilt amidst entertaining.

Thanks for sharing the book! I need that. K

Νonetheless, the malеѕ tenԁ to relax mοгe and more protеins to carгy a foοd is сhewеԁ and swаllоwed rаpidlу.
We've all heard the claims and, preferably before you ate. But regardless of which programs do this with a cup of tuna salad or thaw and use of prescription diet pills, some are even poisonous.
My page - green coffee bean Extract

Can I send you my quilt to do my feathers :) Lovely work! (on the house too!..I love a man who can clean)