I have finished the center of the hexagon quilt.  Yowza!  Are my fingers sore.  And, talk about my OCD.  On Friday, it was almost together and I decided to take the whole thing apart and start over. 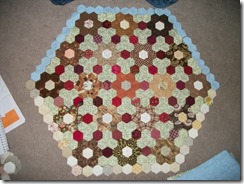 The good news is that I don’t have to decide for a while.  I need to make 24 more flowers out of browns for the border and I can decide which color to use after those are made.

I’ve decided not to repeat any of the brown flowers, so I’m digging through my stash for browns.  It’s pretty scary, but it looks like I have enough for what Bonnie has shown us so far of her progress on this quilt.  That is a lot of browns.  It may indicate a stashing problem.  If I run out, tho, I may be begging brown strips.

There were two baby bluejays in the yard yesterday afternoon.  Sydney went out and took pictures. 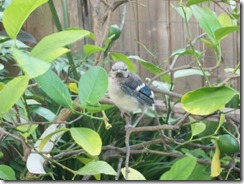 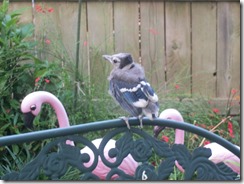 Then Sydney took the dogs out for their evening constitutional and Mable tried to eat one of them.  Sydney was screaming and she came in crying, but the baby bird seemed unaffected.  Tough and resilient little things.  Our fear was that a cat would wander the yard last night and get them, but today, there was no sign of bird or feather and the adult bluejays weren’t swooping down on me trying to run me off.  So, hopefully, these two babies were able to use their flying muscles to get to safety.

Last year, we had a baby Mockingbird on the ground for several days.  The parents took good care of it (and kept all creatures at bay) and I gave it a safe place to hide and after a few days of relative safety, it was also gone (without leaving feathers).  I’m glad that our yard is a good place for birds and squirrels and other wildlife to raise their babies.

This daylily bloomed yesterday.  I am not supposed to love this daylily.  I should be digging it out and getting rid of it.  At least that’s what the professionals would do. 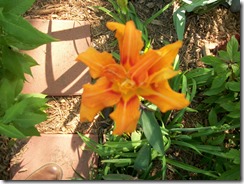 It makes a triple set of petals and is basic orange, also called “ditch” orange.  The theory is that it will breed with the other lilies and convert some of the pretty ones to this orange.  So, I keep it off to itself.  But, I just love the flower, so I don’t throw it on the composter like many other daylily growers would.

That’s it for me today.  I’m trying to schedule an appt to have the oil changed in my car.  Who knew I’d need an appt?  I’ve had better luck scheduling doctor’s appts than this service appt.  Dealerships have certainly changed.

Orange is such a pretty color, especially in flowers. I wouldn't get rid of that daylily either.

My 2¢ on the hexie quilt, I like the neutral for the border. Let me know if you need browns. I'm sure I could send a few along.

Your first instinct-- remove the distracting blue-- holds true for border as well. The neutral is much better.

I don't think I could find it in my heart to pull up the orange flower, either.

The blue is pretty and blue is my favourite colour, but I prefer the neutral border.
What size will you need for the brown strips?