The intrigue of a good design

Every day this week, I’ve spent my 40 minutes of quilting time working on the Two spool sewing machine.  I’ve broken the projects down into steps that can be completed in about that amount of time.  All I’m really doing is cleaning and taking things apart to clean them.  It’s hard not to think of her with emotions, like the prettier she feels, the better she works.  I know it’s the cleaner she is, the better she works.  And, it’s funny how the tiniest little cleaning project can make a huge difference in her smooth operation.

It might help to stop thinking of her having emotions if I stopped thinking of her as a her.  Especially since I’m thinking of naming her (him) Rusty Bucket; the name of a character in a middle school play Sydney was in.

For instance, yesterday, I took apart the stitch length control, which has about 23 parts between the control knob and the feed dogs. 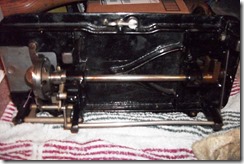 All the metal bars and rods that run down the right side of the machine and along the bottom of the photo and then back up to the feed dogs on the left are connected to the stitch length regulator.  I took out all the screws I could and cleaned the connections and washers, applied fresh oil, and put it all back together again, including a good polish for the stitch length control knob and it’s exposed parts.  What once would barely move is now free and easy to adjust.

The day before, I spent my time trying to figure out why the foot wasn’t making contact with the feed dogs.  The fabric would just slide all over the place between the foot and the dogs.  Turns out, it’s because the foot is bent.  Now, how do you bend a foot that’s been on a machine for half a century?  Anyway, I replaced the foot and adjusted the pressure and the stitches became very regular in length and then I could set the tension.

Today, I took the handwheel assembly apart.  For some reason, I couldn’t loosen the stop knob and cause the hand wheel to turn without moving the needle up and down.  In my head, it needed to because all my other vintage machines work that way.

But, after I got it apart, I discovered it’s not supposed to. 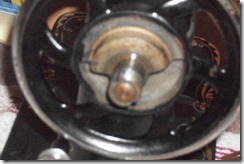 The hand wheel is actually set on the main drive shaft and doesn’t come loose…well, if I’d worked with that screw a while longer, it might have, but I realized there was no need.  The way the machine works, you loosen the stop motion knob and the fly wheel, which is the wheel the treadle belt sits in, loosens and turns without turning the hand wheel.  I’ve never seen a machine that does that.  But, it makes perfect sense. 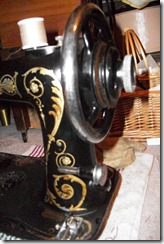 The fly wheel turns separate from the hand wheel and lets you push the bobbin (spool) winder against the belt so that the belt can turn the winder.

Unfortunately, I’m not sure how that’s going to work with the motor I just bought.

It’s poor Rob that has to figure out how.

Not really, but he is going to build me a base for the machine that we can attach the motor to, because there are no screw holes in the machine to attach a motor to, and part of this restoration project is not doing any damage to the machine itself, while converting it from treadle to electric.  Drilling holes in it (if we even could) reminds me of painting hand hewn Dutch antiques with purple paint.

It shouldn’t be done.

I only got one unhappy comment yesterday.  I understood her thoughts and tried to respond as an equal, not superior, just someone that thinks differently.  In the evening, when Sydney asked what we were talking about, Rob jokingly said I’d “gone off” on my blog and suggested I may be off my medication.

Ha-ha.  No.  I’m not.  I just feel like fighting back sometimes.

Next week, I’m in Cleveland for a conference.  I’m trying to arrange it so I have a car, but I don’t know why.  I won’t have a spare minute to shop.  Very disappointing, but maybe next trip I can hit one of the local quilt shops.

Everybody have a great Thursday.  I’m going to try to get Rob to upload a three minute video of me FMQ on the treadle tonight.  It’s not the complete video that we made, but I want to get that segment out there for you guys to prove it can be relaxing to FMQ on a treadle sewing machine.

I suppose it is better to be in Cleveland next week rather than this one....

I am really enjoying hearing about your restoration work. I hope the motor works! I'm sure it has to with the two of you working on it.

I want to learn how to do all the cleaning/fixing/fiddling you do with your machines. I have an old treadle that I got at an auction years ago that I would love to get to work!

That's an interesting mechanical problem you've got there. I wonder if Peter's friend Rain has ever done anything like this?

Gosh-- if we were unhappy with everyone who disagreed with us, would we ever have time for anything else? Like you, I embrace the differently opinionated (at least the ones who are respectful)-- it's the only way to learn something new.

If you already answered this question (or perhaps you know someone else who has?), please just let me know where!

How do you clean up the dirty and rusty parts of the machine? One day recently you said you use just cotton swabs, an old rag, and sewing machine oil (at least that's what I'm recalling). Do you just rub oil on the dirty parts to clean them? Sorry if this is a silly question, but I have 3 antique machines (a Featherweight, and 2 Singer 15-91s: and the 15-91s were free!). One of the 15-91s needs some cleaning and is skipping the occasional stitch, and I don't know where to start.

If you already answered this question (or perhaps you know someone else who has?), please just let me know where!

How do you clean up the dirty and rusty parts of the machine? One day recently you said you use just cotton swabs, an old rag, and sewing machine oil (at least that's what I'm recalling). Do you just rub oil on the dirty parts to clean them? Sorry if this is a silly question, but I have 3 antique machines (a Featherweight, and 2 Singer 15-91s: and the 15-91s were free!). One of the 15-91s needs some cleaning and is skipping the occasional stitch, and I don't know where to start.

Lane I wish you would do a blog post demonstrating how to clean up these vintage machines, how to oil and how to clean the rust off the chrome. :-) Pretty please!

Lane,
Check out the dollhouse printables at the prudent homemaker!

Its funny how work isn't work when it is something you're interested in.

In case I haven't said it recently, YOU ROCK! I should be so handy. Have fun in Cleveland, grew up there, went back only once, to visit the Rock an Roll Hall of Fame.