Children of the Lord

God, told No-ah, to build him an arkie arkie,

Children of the Lord.

That is what it has felt like around here.  We woke in the wee hours of Sunday morning to a storm of biblical proportion and a very frightened 30 pound neurotic beagle in a panic attack.  Electricity went on and off, and every time it did, my bedside lamp, which activates by a touch, would turn on.

Later, when we got out of bed, Rob found an inch of water in our garage.  That’s never happened before in 14 years of flash flooding. 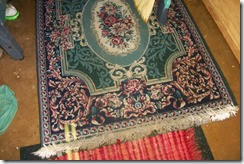 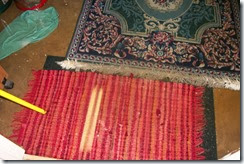 Then, he checked the rain gauge. 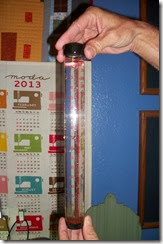 The reason you can’t see the line is that it’s way up there by his fingers.  Eight and one half inches.  Overnight.

Rushing water everywhere, Batman!  I have mulch everywhere except in my flowerbeds.

We unplugged the shed, which runs on an extension cord and settled in to wait for it to stop, which it obligingly did about an hour later.

Sydney and I went to the grocery around nine and there was no traffic and the store was empty and they had buckets everywhere to catch their roof drips, which are never apparent until we get something like this.  But everybody was shell shocked and surprised.  I mentioned this to Syd and she said “I’m not.”  And, I asked, “well, how do you feel?”  “Ok, kinda out of sorts and tired.”  ……hmmmm

We came home and went to the neighbors, where we saw this had happened.  It’s going to look like trick photography. 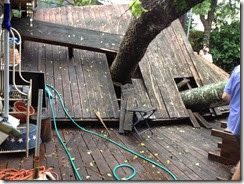 Two very large hackberries, both down, lifting the end of the deck with them and piercing the roof.  The whole deck is knocked off it’s piers and one end is almost perpendicular to the other. 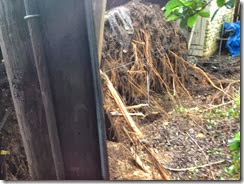 She said it happened about 4am and she crouched with the baby in the front corner of the house.  Her husband was out of town and was rushing back yesterday.  It will be days before they can deal with it because it’s still raining on and off and expected to be very bad again, tomorrow.  Another neighbor was trying to at least clear a path yesterday so they could get from the door to the yard.  But, it wasn’t going very fast with his handsaw.  And, the mosquitoes were coming from under that disturbed deck in clouds.

But, we were safe and even though we had some things get wet, we had almost no real damage, and Rob took advantage of the opportunity to clear off the garage floor and pressure wash the floor and put fans on the cement to dry it out.  We are whole.

And, we are lucky.  Two more days, it’s supposed to rain.  We may be looking for an ark before it’s all said and done.

Be well.  Have a great Monday.  What does a quilter do in the rain?  Tune in tomorrow.  Lane

So glad you are safe!

Oh, your poor neighbor-- how frightening! Glad to hear that you and Rob got it sorted out so quickly. Hope it's going to be good for your garden; things were pretty dry and now they're a lot greener out here.


It has also rained in Virginia for the last several days. It occurred to me that with the sump running almost non-stop in the basement, that if we had a power outage, we'd have a flood in the basement. So I need to find an electrician and get a backup generator for the sump.

Uff da! I'm glad you're okay. What does a quilter do in a storm like that? He goes old school and quilts by hand, or with a treadle machine, by the light of a flickering candle. While singing opera or Broadway tunes in tandem with the howling dog. Well, maybe that's not what every quilter does in the storm, and it's certainly not what I would do, because I don't have a treadle machine and I don't use candles as task lighting anymore after accidentally lighting my HAIR on fire. But I DO sing the opera and Broadway tunes along with my howling dogs, much to the dismay of my spouse and children. ;-)

Stay safe! And I would say "dry" but that's not realistic, eh? And I'm with Rebecca Grace....quilting by hand or treadling. That is YOU, not me...I don't do either.

Echo others in saying ---stay safe!

Good luck with the additional rain, I hope for the best for you!

I sang that song all weekend long (it's one we used to sing around the camp fire, only our ark was made of cedar barkie) and now I'm singing it again.

Glad you guys are OK (Rob even made a little "lemon aid") & in hope your neighbors are able to get things back in order quickly.

oH WOW! We had some storms but nothing that bad.
Glad y'all were safe.